Gleb Pavlovich Yakunin (Russian: Глеб Па́влович Яку́нин; 4 March 1934 – 25 December 2014) was a Russian priest and dissident, who fought for the principle of freedom of conscience in the Soviet Union. He was a member of the Moscow Helsinki Group, and was elected member of the Russian Parliament from 1990 to 1995.

Gleb Yakunin was born into a musical family. He studied biology at Irkutsk Agricultural Institute. He converted to Christianity at the end of the 1950s, after coming into contact with Alexander Men,[1] and graduated from the Moscow Theological Seminary of the Russian Orthodox Church in 1959. In August 1962 he was ordained a priest and was appointed to the parish church in the city of Dmitrov near Moscow.

Together with the priest Nikolai Eschliman, Yakunin wrote an open letter in 1965 to the Patriarch of Moscow, Alexius I, where he argued that the Church must be liberated from the total control of the Soviet state. The letter was published as a samizdat ("self-published", i.e., underground press). In retaliation for this, he was forbidden to continue his priestly ministry in the parish in May 1966. Aleksandr Solzhenitsyn supported Gleb Yakunin and Nikolai Eschliman in his letter to Patriarch Alexius.

In 1976 he created the Christian Committee for the Defense of the Rights of Believers in the USSR. He published several hundreds of articles about the suppression of religious freedom in the Soviet Union. These documents were used by dissidents of all religious denominations. Yakunin was arrested and convicted for anti-Soviet agitation on 28 August 1980. He was kept in the KGB Lefortovo prison until 1985, and then in a labor camp known as "Perm 37". Later, he was punished by involuntary settlement in Yakutia.

Gleb Yakunin was given amnesty in March 1987 under Mikhail Gorbachev. He was allowed to return to Moscow and worked again as a priest until 1992. He was rehabilitated in 1991. In 1990 Yakunin was elected to the Supreme Soviet of the Russian Federation and worked as deputy chairman the Parliamentary Committee for the Freedom of Conscience. He was co-author of the law concerning "freedom of all denominations" that was used for the opening of churches and monasteries throughout the country.

Gleb Yakunin was a member of the committee created for the investigation of the Soviet coup attempt of 1991 and chaired by Lev Ponomaryov, and thereby gained the access to secret KGB archives. In March 1992 he published materials about the cooperation between the Moscow Patriarchate and the KGB. He claimed that the code names of several high-rank KGB agents in the Orthodox Church were those of Patriarch Alexius II, Mitropolitans Filaret of Kiev, Pitrim of Volokolamsk, and others. The Russian church excommunicated Yakunin in 1993. 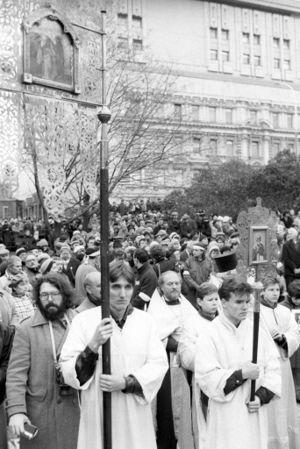 Gleb Yakunin was one of the organizers of the democratic alliance "Choice of Russia" in 1993, prior to the opening of the Constituent Assembly of Russia called by the Russian president Boris Yeltsin. He became a State Duma delegate representing the party "Democratic Russia" in 1996. He created the Committee for Defense of Freedom of Conscience in 1995. He criticized the law "On Freedom of Conscience and Religious Associations" adopted by the Duma[2][3] and made numerous statements in support of human rights in Russia.[4]

As is traditional for Orthodox parish priests, Gleb Yakunin was married, and has three children: Maria, Alexander and Anna.