This article is about the country house and its opera house. See Glyndebourne Festival Opera for the summer opera festival.

Glyndebourne (/ˈɡlaɪndbɔːn/) is an English country house, the site of an opera house that, since 1934, has been the venue for the annual Glyndebourne Festival Opera. Initially, operas were presented within the house but there is now a free-standing opera house on its grounds. The house itself, located near Lewes in East Sussex, England, is thought to be about six hundred years old.[1]

History of the house

"There had been a manor house at Glynde Bourne (as it was often spelt) since the fifteenth century",[1] but the exact age of the house is unknown. Some surviving timber framing and pre-Elizabethan panelling makes an early sixteenth-century date the most likely.[2] In 1618, it came into the possession of the Hay family, passing to James Hay Langham in 1824. He inherited his father's baronetcy and estate in Northamptonshire in 1833 which under the terms of his inheritance should have led to him relinquishing Glyndebourne, but as a certified lunatic he was unable to do so. After litigation the estate passed to a relative, Mr Langham Christie, but he later had to pay £50,000 to persuade another relative to withdraw a rival claim.

Langham Christie's son, William Langham Christie, made substantial alterations to the house in the 1870s. First, a brick extension hid its seventeenth-century facade, while ornate stonework and balustrading was added. Then, in 1876, the architect Ewan Christian was engaged to install bay windows and add decorative brickwork to give the house the Jacobethan appearance which can still be seen from the gardens today. Some of the exterior of the older parts of the house can be seen from the driveway next to the theatre.

Origins of the opera house

John Christie obtained the use of the house in 1913 after the death of William Langham Christie, his grandfather. He came into full legal possession of the estate in 1920. Among other renovations, he added to the house an organ room, 80 feet (24 m) long, in the process almost doubling the length of the south facade of the house. This room contained one of the largest organs outside of a cathedral in the country. It was built by the firm of Hill, Norman & Beard Ltd (bought by Christie in 1923). After the Second World War, John Christie made a gift of sections of the soundboards, pipes and structural parts to the rebuilt Guards Chapel, Wellington Barracks (which had been destroyed in the Blitz); the case and console remain at Glyndebourne.

John Christie's fondness for music led him to hold regular amateur opera evenings in this room. At one of these evenings in 1931, he met his future wife, the Sussex-born Canadian soprano Audrey Mildmay, a singer with the Carl Rosa Opera company who had been engaged to add a touch of professionalism to the proceedings.[3] They were married on 4 June 1931. During their honeymoon, they attended the Salzburg and Bayreuth festivals, which gave them the idea of bringing professional opera to Glyndebourne, although Christie's original concept was for it to be similar to the Bayreuth Festival. As their ideas evolved, the concept changed to focus on smaller-scale productions of operas by Mozart more suited to the intimate scale of the planned theatre. 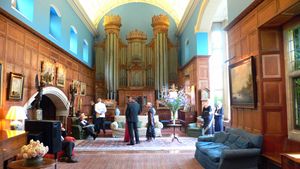 As an annex to the organ room, the Christies built a fully equipped and up-to-date theatre with a 300-seat auditorium and an orchestra pit capable of holding a symphony orchestra. Christie engaged conductor Fritz Busch as the first music director, Carl Ebert, the Intendant of Berlin's Städtische Oper as artistic director, and Rudolf Bing became general manager until 1949. All three men were exiles from Nazi Germany.

After extensive rehearsals, the first six-week season opened on 28 May 1934 with a performance of Le nozze di Figaro followed by Così fan tutte. Boyd Neel had conducted the first music heard in the renovated Glyndebourne opera house in 1934, in private performances, at John Christie's invitation.[4]

John Christie's original theatre was soon enlarged and improved many times after its initial construction. As early as 1936 its capacity was increased to 433; by 1952 it held nearly 600, and finally, in 1977, it held 850 people. In addition, a rehearsal hall was constructed.

Productions were interrupted by the Second World War, during which time the house became an evacuation centre for children from London. After 1945 the Festival slowly began again. Until 1951, the entire burden of financing the opera festival was undertaken by John Christie himself, but, in 1952, the Glyndebourne Festival Society was formed to take over the financial management. Christie's death in 1962 resulted in his son George (later Sir George) taking over, and additional changes and improvements to the theatre continued.

Hill, Norman and Beard built the pipe organ in 1924, and it gradually expanded over the years. John Christie owned a considerable share in the company. Currently, the organ is a gutted shell, the pipes having been donated to various churches for the construction of new organs after World War II. The organ originally contained 4 manuals and 46 stops, but this was eventually expanded to 106 stops, unusual for an English-built organ in having multiple diapason chorus ranks of pipes. 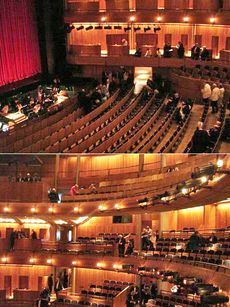 By the late 1980s the theatre's expansion, which had proceeded in a somewhat piecemeal fashion, included an agglomeration of outbuildings which housed restaurants, dressing rooms, storage and other facilities. It became clear to George Christie that a completely new theatre - and not just an enlargement of the old one - was necessary. Having chosen the architect Michael and Patty Hopkins of Hopkins Architects in a design competition, Christie announced in 1990 that a new theatre, capable of seating 1,200 people, would be constructed in 1992. 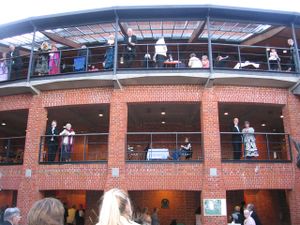 The balcony of the present theatre

The old theatre hosted its last festival in 1992, and construction of a brand-new theatre was under way. It was completed at a cost of some £34 million, 90 per cent of which was raised through donations, which gave the donors control over 28% of the seats. The inaugural performance in the new theatre on 28 May 1994, given sixty years to the day after the old theatre's first performance, was Le nozze di Figaro.[5]

The design of the theatre, a large brick oval building, has resulted in a four-level, horseshoe-shaped auditorium with main level seating, two balconies, and a gallery topped with a circular roof. The over sixty-foot-high stage building is semi-circular in shape and allows for the efficient flying and storage of scenery. The acoustics, by Derek Sugden and Rob Harris of Arup Acoustics, have received praise.[6]

Since its establishment in 1986, Glyndebourne's Education department has undertaken an array of projects within the local community. Schools around the Sussex and Kent area often visit the venue for performances and workshops.[7] Youth opera projects are also undertaken such as the recent production of Knight Crew for 14- to 19-year-olds and the previous Hip H'Opera project in 2006 - timed to coincide with the 250th anniversary of Mozart's birth. The department has also worked with HMP Lewes since 1988 in projects such as inmate-designed puppet shows influenced by works such as Verdi's Falstaff.

Glyndebourne has featured windmills for many years. A post-mill, erected in 1706, was used until 1921, but collapsed in 1925, and the trestle timbers were blown down in 1964.

Glyndebourne applied for planning permission to Lewes District Council in January 2007. The council granted permission in July 2007, but the decision was called in by the Secretary of State because of the wider implications of the proposal for renewable energy development in the South Downs Area of Outstanding Natural Beauty, and strong opposition from countryside protection groups and local residents. On 10 July 2008 the Secretary of State granted planning permission.[8]

In 2008-9 Glyndebourne erected a temporary 50m mast on Mill Plain to monitor meteorological conditions for a year, prior to erection of the turbine. The data collected showed lower wind levels than had been predicted at this location, perhaps because 2008-9 had lower wind levels than usual. The turbine was launched in January 2012,[9] and generated 89% of the company's electricity requirements in the first 12 months, up to 31 January 2013.[10]