From Infogalactic: the planetary knowledge core
Jump to: navigation, search
For other uses, see Gnomon (disambiguation). 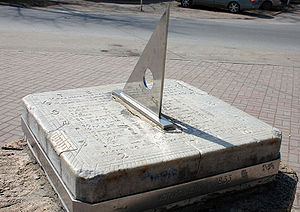 The gnomon is the triangular blade in this sundial

A gnomon ([ˈnoʊmɒn], from Greek γνώμων, gnōmōn, literally: "one that knows or examines"[1][2]) is the part of a sundial that casts the shadow.

The term has come to be used for a variety of purposes in mathematics and other fields.

File:Gnomon.svg
A gnomon as in Euclid book II

Anaximander (610–546 BC) is credited with introducing this Babylonian instrument to the Greeks.[3] Oenopides used the phrase drawn gnomon-wise to describe a line drawn perpendicular to another.[4] Later, the term was used for an L-shaped instrument like a steel square used to draw right angles. This shape may explain its use to describe a shape formed by cutting a smaller square from a larger one. Euclid extended the term to the plane figure formed by removing a similar parallelogram from a corner of a larger parallelogram. Indeed, the gnomon is the increment between two successive figurate numbers, including square and triangular numbers.

Hero of Alexandria defined a gnomon as that which, when added to an entity (number or shape), makes a new entity similar to the starting entity. In this sense Theon of Smyrna used it to describe a number which added to a polygonal number produces the next one of the same type. The most common use in this sense is an odd integer especially when seen as a figurate number between square numbers.

The Chinese used the gnomon. It is mentioned in the 2nd century Nine Chapters on the Mathematical Art as being used much earlier by the Duke of Zhou (11th century BC).

In the northern hemisphere, the shadow-casting edge of a sundial gnomon is normally oriented so that it points north and is parallel to the rotation axis of the Earth. That is, it is inclined to the horizontal at an angle that equals the latitude of the sundial's location. At present, such a gnomon should thus point almost precisely at Polaris, as this is within a degree of the North celestial pole.

A three-dimensional gnomon is commonly used in CAD and computer graphics as an aid to positioning objects in the virtual world. By convention, the X axis direction is colored red, the Y axis green and the Z axis blue.

NASA astronauts used a gnomon as a photographic tool to indicate local vertical and to display a color chart when they were working on the Moon's surface.

In the book The Tower at the End of the World by Brad Strickland, a giant tower and thin stairs turn out to be the gnomon of a giant sundial. The island the tower is found on is often called "Gnomon Island".

The Gnomon of Saint-Sulpice inside the church of Saint Sulpice in Paris, France, built to assist in determining the date of Easter, was fictionalized as a "Rose Line" in the novel The Da Vinci Code.[5]

A gnomon is used metaphorically in Charles Portis's novel Masters of Atlantis.