Gnosticism and the New Testament

The term "Gnosticism" does not appear in ancient sources,[1] and was first coined by Henry More in a commentary on the seven letters of the Book of Revelation, where More used the term "Gnosticisme" to describe the heresy in Thyatira.[2] The term derives from the use of the Greek adjective gnostikos ("learned", "intellectual", Greek γνωστικός) by Irenaeus (c. 185 AD) to describe the school of Valentinus as he legomene gnostike haeresis "the heresy called Learned (gnostic)".[3]

The Gnostics were a rather diverse group of early movements finding a basis often in Christianity or Judaism. These people did not refer to themselves as "Gnostics" but rather the label was applied mostly by their opponents and modern scholars.

Irenaeus wrote a five-volume book (On the Detection and Overthrow of the So-Called Gnosis commonly referred to as Against Heresies).

The Valentians' use of the New Testament

It is not clear how many of the sects treated by Irenaeus in On the Detection and Overthrow of Knowledge Falsely So Called he actually considers to be gnostikos, but Valentinus is specifically named as gnostikos. Irenaeus describes how the Valentinians read in Ephesians evidence for their characteristic belief in the existence of the Æons as supernatural beings:

Paul also, they affirm, very clearly and frequently names these Æons, and even goes so far as to preserve their order, when he says, “To all the generations of the Æons of the Æon.” (Ephesians 3:21) Nay, we ourselves, when at the giving of thanks we pronounce the words, “To Æons of Æons” (for ever and ever), do set forth these Æons. And, in fine, wherever the words Æon or Æons occur, they at once refer them to these beings.

— On the Detection and Overthrow of Knowledge Falsely So Called Book 1. Ch.3 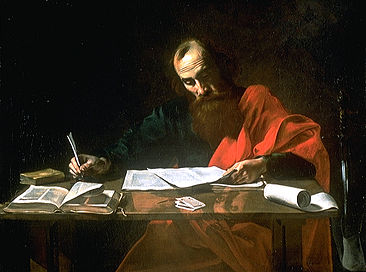 The followers of Valentinius attempted to systematically decode the Epistles, claiming that most Christians made the mistake of reading the Epistles literally rather than allegorically. Valentians understood the conflict between Jews and Gentiles in Romans to be a coded reference to the differences between Psychics (people who are partly spiritual but have not yet achieved separation from carnality) and Pneumatics (totally spiritual people).

The Valentians argued that such codes were intrinsic in gnosticism, secrecy being important to ensuring proper progression to true inner understanding. In 2 Corinthians, Paul states he had heard ineffable words which it is not lawful for a man to utter, a position that gnostic initiates supported with respect to the higher gnostic teachings. However, Paul does also suggest Gnosis puffeth up (often this passage is found with gnosis translated - knowledge puffeth up), which appears to diminish support for gnosticism, but Clement of Alexandria offered the explanation that this meant to entertain great and true sentiments and was a reference to the magnitude of the effect of receiving it.[citation needed]

Irenaeus argued that the use of scripture by Gnostic groups, such as the Valentinians, was flawed, and demonstrated his argument by taking arbitrary passages from various writings of Homer to compose a new story about Hercules. While the individual passages were authentic, the connected story was not of Homer's composition, and in fact the passages featured a number of different characters instead of just Hercules. Irenaeus compared this abuse of Homer to what he considered as abuse of the New and Old Testaments by the gnostics.[4]

Marcion is sometimes described as a Gnostic philosopher. In some essential respects, Marcion proposed ideas which would have aligned well with Gnostic thought. Like the Gnostics, he argued that Jesus was essentially a divine spirit appearing to men in the shape of a human form, and not someone in a true physical body.[5] For Gnostics, every human being is born with a small piece of God's soul lodged within his/her spirit (akin to the notion of a 'Divine Spark').[5] God is thus intimately connected to and part of his creation.[5] Salvation lies in turning away from the physical world (which Gnostics regard as an illusion) and embracing the god-like qualities within.[5] Marcion, by contrast, held that the heavenly Father (the father of Jesus Christ) was an utterly alien god; he had no part in making the world, nor any connection with it.[5]

Gnostic sayings in Matthew and Luke

The lost "Q" gospel (German for Quelle or source) is assumed to be a simple listing of sayings of Jesus, perhaps akin to the Gospel of Thomas found at Nag Hammadi in upper Egypt in 1946. It is from these that the Synoptic Gospels are thought to derive their similar provenances. Luke also contains a saying similar to one from the Gospel of Thomas: "The kingdom of God cometh not with observation. Neither shall they say, Lo here! or, lo there! for, behold, the kingdom of God is within you." (Luke 17:21). This correlates to a quotation in the Gospel of Thomas: "Jesus said, "If your leaders say to you, 'Look, the (Father's) kingdom is in the sky,' then the birds of the sky will precede you. If they say to you, 'It is in the sea,' then the fish will precede you. Rather, the (Father's) kingdom is within you and it is outside you." (Gospel of Thomas 3). It is unclear whether the author of the Gospel of Thomas borrowed from the Gospel of Luke, or vice versa. There is reason to believe that Luke was written at least a generation before Thomas, in which case the similarity would be the result of derivation from Luke.

The Gospel of John

Since the first quotations from the Gospel of John appear in the anti-heresy works of Irenaeus, many scholars like K.G. Bretschneider (1776–1848), Hegel and F.C. Baur (born 1792 - died 1860) cast doubt on the Authorship of the Gospel of John, and often consider it to have been a 2nd-century polemic by an author holding what later became the position of the orthodoxy. This is called into question by Rylands Library Papyrus P52, which contains a fragment from John chapter 18 dated with a fair measure of confidence to the first half of the 2nd century, as well as the recent work of Charles Hill, who gives evidence that the Gospel of John was used between CE 90 and 130, and the possible use of uniquely Johannine gospel material in several works which date from this period.[6]

Paul was a Jew (of the tribe of Benjamin), and a member of the conservative Pharisee sect prior to conversion. Paul's ability to write in Greek is questionable, (other people assisted him in writing his epistles,) and there is no evidence that he used a Greek translation of the Hebrew scriptures. Although born in Tarsus, he was brought up in Jerusalem at the feet of Gamaliel, one of the most highly regarded Hebrew teachers. Paul referred to himself as an Hebrew of the Hebrews.[7]

The resurrection of the dead by Michelangelo Buonarroti

In 1 Corinthians 15, Paul refers to baptism for the dead (15:29), a concept according to Elaine Pagels that was easily explained by gnostics. Since the gnostics argued that the text was allegory, their stance was that baptism for the dead refers to pneumatics (i.e. gnostics) taking the place of psychics (i.e. literalists), who were dead to gnosis.[citation needed] Tertullian wrote about Marcion gnostics in his work against Marcionism (Adversus Marcionem libri V) indicating that they believed in baptism of the dead. The doctrines of Marcion were so similar to the Gnostics that Irenaeus, a disciple of Polycarp in the 180s regarded him as one of them.

John Gill in his commentary of 1 Corinthians 15:29 remarked, "...some think the apostle [Paul] has in view a custom of some, who when their friends died without baptism, used to be baptized in their room; this is said to be practiced by the Marcionites in Tertullian's time, and by the Corinthians in the times of the Apostle John; but it does not appear to have been in use in the times of the Apostle Paul; and besides, if it had been, as it was a vain and superstitious one, he would never have mentioned it without a censure..."[8]

Jameison-Faussett-Brown Commentary of 1 Corinthians 15:29 mentioned, "...Paul, without giving the least sanction to the practice, uses an ad hominem argument from it against its practitioners, some of whom, though using it, denied the resurrection: 'What account can they give of their practice; why are they at the trouble of it, if the dead rise not?' [So Jesus used an ad hominem argument, Matthew 12:27]." (Author's brackets)[9]

In 1 Corinthians, Paul recommends celibacy, but also recommends marriage for those who are not suited for celibacy. Later (1 Cor. 9:5), he defends the right of Peter and the other apostles to be married and to travel accompanied by their wives, although most scholars determine Paul himself to be unmarried. In contrast, he condemned sexual immorality of all kinds, in various epistles (Romans 13:13, 1 Cor. 6:18, 1 Thess. 4:3), along with several other categories of sins, and making no exceptions for these.