From Infogalactic: the planetary knowledge core
Jump to: navigation, search
For other uses, see Goby (disambiguation).

Gobies are fish of the family Gobiidae, one of the largest fish families comprising more than 2,000 species in more than 200 genera.[1] Most of them are relatively small, typically less than 10 cm (3.9 in) in length. Gobies include some of the smallest vertebrates in the world, such as Trimmatom nanus and Pandaka pygmaea, which are under 1 cm (3⁄8 in) long when fully grown. Some large gobies, such as some species of the genera Gobioides or Periophthalmodon, can reach over 30 cm (0.98 ft) in length, but that is exceptional. Generally, they are benthic, or bottom-dwellers. Although few are important as food for humans, they are of great significance as prey species for commercially important fish such as cod, haddock, sea bass, and flatfish. Several gobies are also of interest as aquarium fish, such as the bumblebee gobies of the genus Brachygobius. Phylogenetic relationships of gobies have been studied using molecular data.[2][3] 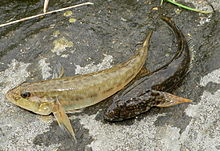 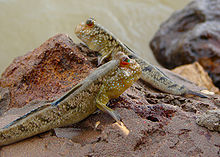 The most distinctive aspects of goby morphology are the fused pelvic fins that form a disc-shaped sucker. This sucker is functionally analogous to the dorsal fin sucker possessed by the remoras or the pelvic fin sucker of the lumpsuckers, but is anatomically distinct; these similarities are the product of convergent evolution. Gobies can often be seen using the sucker to adhere to rocks and corals, and in aquariums they will stick to glass walls of the tank, as well.

Gobies are spread all over the world in tropical and temperate near shore-marine, brackish and freshwater environments. Their range extends from the Old World coral reefs to the seas of the New World, and includes the rivers and near-shore habitats of Europe and Asia.[4] On coral reefs, gobies constitute 35% of the total number of fishes and 20% of the species diversity.[5] Gobies are generally bottom-dwellers and live inside the bodies or burrows of invertebrates.

Members of the subfamily Amblyopinae are elongated mud-dwelling gobies commonly known as the eel gobies or worm gobies. Their two dorsal fins are connected by a membranous structure and their eyes are highly reduced. They are usually pink, red, or purple in coloration. Amblyopinae contain 12 genera and about 23 species.[6][7]

Members of Gobiinae are known as true gobies. It is the most widespread and most diverse of the subfamilies under Gobiidae, containing around 2000 species and 150 genera.

Members of Gobionellinae mostly inhabit estuarine habitats, though some are freshwater and a single genus, Gnatholepis, is marine. They are found in tropical and temperate regions around the world with the exception of the northeastern Atlantic Ocean, the Mediterranean Sea, and the Ponto-Caspian region. It includes around 370 species and 55 genera.[11]

Members of Oxudercinae are commonly known as mudskippers. They are highly specialized members of the family. They are able to survive for extended periods on land through a combination of behavioral and physiological adaptations, including pectoral fins that act as simple legs; the ability to breathe through their skins (like frogs); and the digging of damp burrows to avoid drying out. Mudskippers live in tidal areas, particularly on mudflats and in mangrove forests, and are only found in tropical and subtropical regions.

Sicydiinae are a small subfamily of freshwater gobies, including only nine genera.[12] They are usually found in fast-moving mountain streams in tropical islands.[13][14] 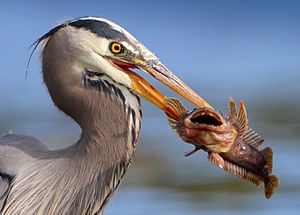 Grey heron with a captured goby

Gobies are primarily fish of shallow marine habitats, including tide pools, coral reefs, and seagrass meadows; they are also very numerous in brackish water and estuarine habitats, including the lower reaches of rivers, mangrove swamps, and salt marshes. A small number of goby species (unknown exactly, but in the low hundreds) are also fully adapted to freshwater environments. These include the Asian river gobies (Rhinogobius spp.), the Australian desert goby (Chlamydogobius eremius), and the European freshwater goby Padogobius bonelli. Most gobies feed on small invertebrates, although some of the larger species eat other fish, and a few eat planktonic algae.

Gobies attach their eggs to a substrate, such as vegetation, coral, or a rock surface. They lay from five to a few thousand eggs, depending on the species. After fertilizing the eggs, the male guards the eggs from predators and keep them free from detritus. The male fans the eggs, thereby providing them with oxygen. The female maintains the burrow. The eggs hatch after a few days. The larvae are born transparent, and they develop coloration after spreading to find a suitable habitat. The larvae of many freshwater goby species are carried downstream to the brackish waters, or even to the sea. They return to fresh water weeks or months later.[15]

Gobies usually live in male-female pairs that construct and share burrows, similar to many other fish such as Mozambique tilapia. The burrows are used for shelters and spawning places. Gobies use their mouths to dig into the sea bottom, removing dead coral-fragments, rubble, and benthic algae in order to build their burrows.[16] Gobies maintain their burrows by fanning away sand inside the burrows. Furthermore, gobies use coral rubble to block burrow entrance. A single goby carry as many as nine pieces of coral rubble per minute. Gobies also build a 6–13 cm high mound over the entrance of their spawning burrow.[16] The mound lets the water flow fast over the mound. The water flow created by the mound helps to provide oxygen to the eggs. While burrow building is a cooperative behavior done by both sexes, males usually put more effort in burrow maintenance than females. Females feed more instead, because the reproductive success is optimal when females put more energy in preparing for the reproduction.[17] Interestingly, after spawning eggs, the roles of male and female changes. Females primarily maintain the burrow, and males mainly care for the eggs by fanning them, thereby providing oxygen. When females leave the burrow, however, the mounds lose their heights. The males then give up on the eggs and eat them, preparing for future mating opportunities. Goby burrows vary in size depending on the size of the goby species.[17]

Kleptogamy refers to the sneaking behavior during reproduction. Female gobies prefer male gobies with large bodies. Since not all males have large bodies, the smaller ones may cheat instead of expending energy to find mates.[18] The sneakers wait near the spawning ground of paired gobies. The sneakers then release their sperms on the spawning ground as soon as the paired female releases her eggs.[19] Even though sneakers’ sperms fertilize some eggs, the paired male cannot distinguish the eggs fertilized by the sneakers from those fertilized by his own sperms. Therefore, the paired male equally gives parental care to all the eggs.[20]

A few species of goby, such as blackeye goby and Lythrypnus dalli, can change their sexes. Sex change is possible in these gobies, since the external genitalia for males and females do not differ much.[18] Sex changes can take from days to weeks. Most sex changes in gobies are from female to male (protogyny) rather than male to female (protandry). Female-to-male changes are observed not only in gobies but also in wrasses, damselfishes, and sea basses.[18] Female-to-male change usually occurs because the resident male of the group is dead. If there is no male in the group, reproduction will be impossible. Therefore, the dominant female turns into male, allowing mating to happen.[21] Male-to-female change occurs when the females have preference for specific features in males. For example, female gobies prefer large males, and a few large males mate with multiple females, whereas small males lose their chance to mate. Small males either choose to become sneakers (kleptogamy) or choose to transform into females because all females technically have high mating opportunities. By turning into females, males can ensure that they produce many descendants.[18][22]

Some gobies have extraordinarily developed sex change ability. Gobiodon histrio from the Great barrier Reef exhibits bi-directional sex changes. Gobiodon histrio is one of the very few species that can change sex in both ways. It has been shown that when two Gobiodon historio females, used to be males, are on the same coral reef, one of them transformed back into a male goby.[22]

Some gobies remember landmarks that are within short distances, and use them to find their ways. Small frillfin gobies (Bathygobius soporator) live in intertidal zones. They swim through the pools during high tides and memorize how each pool connects to the others. Then, during low tides, they can exhibit accurate jumping behaviors, as they have memorized the paths.[24] In a new environment, these gobies do not show jumping behaviors or jump into wrong pools. Nevertheless, after one night, they show the same accurate jumping behaviors.[25]

A study was done to understand how gobies react to changing habitat. Gobies were given two choices: a safe habitat with less food and a dangerous habitat with more food. Results from both the full and hungry gobies revealed that gobies, when confronted with the trade-off between foraging and avoiding predation, made choices that would better their foraging.[26] 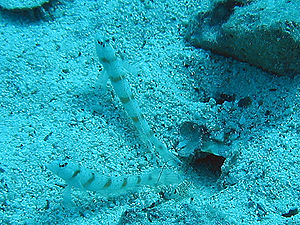 Some marine gobies live in symbiosis with shrimp.

Gobies sometimes form symbiotic relationships with other species,[27] such as with burrowing shrimps. The shrimp maintains a burrow in the sand in which both the shrimp and the goby live. The shrimp has poor eyesight compared to the goby, but if it sees or feels the goby suddenly swim into the burrow, it will follow. The goby and shrimp keep in contact with each other, the shrimp using its antennae, and the goby flicking the shrimp with its tail when alarmed. These gobies are thus sometimes known as "watchmen gobies" or "prawn gobies". Each party gains from this relationship: the shrimp gets a warning of approaching danger, and the goby gets a safe home and a place to lay its eggs. Only the alpha male and female reproduce, other fish in the colony eat sparingly to resist being eaten by the alpha male or female. This way, only the largest and fittest are able to reproduce.[citation needed]

Another example of symbiosis is demonstrated by the neon gobies (Elacatinus spp.). These gobies, known as "cleaner gobies", remove parasites from the skin, fins, mouth, and gills of a wide variety of large fish. The most remarkable aspect of this symbiosis is many of the fish that visit the gobies' cleaning stations would otherwise treat such small fish as food (for example, groupers and snapper). Again, this is a relationship where both parties gain: the gobies get a continual supply of food as bigger fish visit their cleaning stations, and the bigger fish leave the cleaning stations healthier than they were when they arrived.

Another form of symbiosis exists between gobies and the mushroom coral Heliofungia actiniformis (Fungiidae), in which representatives of the genus Eviota roam among the tentacles possibly hiding from predators.[28][29] 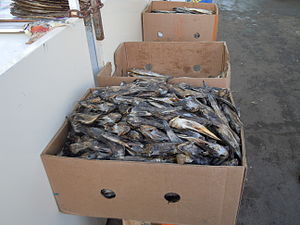 Dried gobies for sale on the market in Odessa, Ukraine

Gobies have commercial importance in Russia and Ukraine. They are fished in the Sea of Azov, northwestern Black Sea and Caspian Sea. Most important species are round goby, monkey goby, toad goby, and grass goby. The grass goby is also a commercial fish in Italy.

Several species of gobies are kept in aquaria.[30] Most captive gobies are marine. Perhaps the most popular is the small but colorful neon goby. Most gobies stay toward the lower portion of the aquarium, hiding in the rockwork, but some species (most notably the shrimp gobies) prefer to dig themselves little burrows. Aquarists typically provide them with a fine-grained substrate to prevent damage to their delicate undersides. Commonly kept saltwater species include the Randall's shrimp goby, and watchman goby.