God as the devil

From Infogalactic: the planetary knowledge core
(Redirected from God as the Devil)
Jump to: navigation, search

In Christian heresiology, there have been historical claims that certain Christian sects worshipped the devil. This was especially an issue in the reaction of the early Church to Gnosticism and its dualism, where the creator deity is understood as a demiurge subordinate to the actual, transcendent God.

Satan in the Hebrew Bible

In the Hebrew Bible God is depicted as the source of both light and darkness, as in Isaiah 45:6-7.[1] This concept of "darkness" or "evil" was not yet personified as "the devil," a later development in Jewish thought.[2]

The author of the Books of Chronicles is thought to have first introduced the notion of "divine intermediaries", not found in the earlier parts of the Hebrew Bible. The main evidence adduced by theologians to support this is 1 Chronicles 21, a reworked version of 2 Samuel 24.

This change is made most evident in the Chronicler's treatment of 2 Samuel 24:1:

And again the anger of the LORD was kindled against Israel, and he moved David against them to say, Go, number Israel and Judah.

And Satan stood up against Israel, and provoked David to number Israel.

In the Book of Samuel, YHWH himself is the agent in punishing Israel, while in 1 Chronicles an "adversary" is introduced. This is usually taken to be the result of the influence of Persian dualism on Israelite demonology.

Scholars are divided on whether in Chronicles, "the adversary" had already become a proper name, "the Adversary" (Satan). The traditional opinion has been that this is the case, arguing from the absence of the definite article in שטן "adversary". S. Japhet in her The Ideology of the Book of Chronicles and its Place in Biblical Thought (1989) argued against mainstream opinion in suggesting that שטן still had the generic meaning and only became the proper name "Satan" at a later date, by about the 2nd century BC.[3] 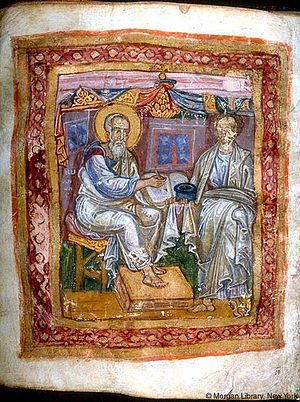 Tertullian accuses Marcion of Sinope, the first major heretic of Christianity in the 1st century, that he "[held that] the Old Testament was a scandal to the faithful [...] and [...] accounted for it by postulating [that Jehovah was] a secondary deity, a demiurgus, who was god, in a sense, but not the supreme God; he was just, rigidly just, he had his good qualities, but he was not the good god, who was Father of Our Lord Jesus Christ."[4] The Church condemned his writings as heretical.

John Arendzen (1909) in the Catholic Encyclopedia (1913) mentions that Eusebius accused Apelles, the 2nd-century AD Gnostic, of considering the Inspirer of Old-Testament prophecies to be not a god, but an evil angel.[5]

Hegemonius (4th century) accuses the Persian prophet Mani, founder of the Manichaean sect in the 3rd century AD, identified Jehovah as "the devil god which created the world"[6] and said that "he who spoke with Moses, the Jews, and the priests [...] is the [Prince] of Darkness, [...] not the god of truth."[7]

Nicholas Weber in the Catholic Encyclopedia article Albigenses (1907) notes that the enemies of the Albigenses, a Christian sect in 12th- and 13th-century France, a branch of the Cathari, accused them that their doctrine held that "the creator [...] of the material world [...] is the source of all evil [...] He created the human body and is the author of sin [...] The Old Testament must be either partly or entirely ascribed to him; whereas the New Testament is the revelation of the beneficent God."[8] They ultimately came into conflict with both the civil order and the Church which led to the Albigensian Crusade.