This conception differs from the traditional Christian Trinity; within Mormonism, the Father, the Son, and the Holy Ghost are not said to be one in substance or essence; instead, they remain three separate beings, or personages, completely united in will and purpose, as one God. It also differs substantially from the Jewish tradition of ethical monotheism in which elohim (אֱלֹהִים) is a completely different conception.

This description of God represents the orthodoxy of The Church of Jesus Christ of Latter-day Saints (LDS Church), established early in the 19th century. 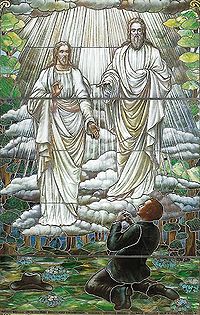 Most early Latter Day Saints came from a Protestant background, believing in the doctrine of Trinity that had been developed during the early centuries of Christianity. Before about 1835, Mormon theological teachings were similar to that established view.[2] However, founder Joseph Smith's teachings regarding the nature of the Godhead developed during his lifetime, becoming most fully developed in the few years prior to his murder in 1844. Beginning as an unelaborated description of the Father, Son, and Holy Spirit as being "One", Smith taught that the Father and the Son were distinct personal members of the Godhead as early as 1832.[3] Smith's public teachings later described the Father and Son as possessing distinct physical bodies, being one together with the Holy Ghost, not in material substance, but in spirit, glory, and purpose–a view sometimes called social trinitarianism.[4][5]

Mormons view their concept of the Godhead as a restoration of original Christian doctrine as taught by Christ and the Apostles. Elements of this doctrine were revealed gradually over time to Smith. Mormons teach that in the centuries following the death of the Apostles, views on God's nature began to change as theologians developed doctrines and practices, though they had not been called as prophets designated to receive revelation for the church. Mormons see the strong influence of Greek culture and philosophy[6] (Hellenization) during this period as contributing to a departure from the traditional Judeo-Christian view of a corporeal God in whose image and likeness mankind was created.[7][8] These theologians began to define God in terms of three persons, or hypostases, sharing one immaterial divine substance, or ousia—a concept that some claim found no backing in scripture,[9][10] but closely mirrored elements of Greek philosophy such as Neoplatonism.[11] Mormons believe that the development process leading up to the Trinity doctrine left it vulnerable to human error, because it was not founded upon God's established pattern of continued revelation through prophets.

The Book of Mormon teaches that God the Father, and his Son Jesus Christ, and the Holy Ghost are "one",[12]) with Jesus appearing with a body of spirit before his birth,[13] and with a tangible body after his resurrection.[14] The book describes the "Spirit of the Lord" "in the form of a man" and speaking as a man would.[15]

Prior to the birth of Jesus, the book depicts him as a spirit "without flesh and blood", with a spirit "body" that looked the same as he would appear during his physical life.[16] Moreover, Jesus described himself as follows: "Behold, I am he who was prepared from the foundation of the world to redeem my people. Behold, I am Jesus Christ. I am the Father and the Son. In me shall all mankind have life, and that eternally, even they who shall believe on my name; and they shall become my sons and my daughters."[17] In another passage of the Book of Mormon, the prophet Abinadi states,

I would that ye should understand that God himself shall come down among the children of men, and shall redeem his people. And because he dwelleth in flesh he shall be called the Son of God, and having subjected the flesh to the will of the Father, being the Father and the Son—the Father, because he was conceived by the power of God; and the Son, because of the flesh; thus becoming the Father and Son—and they are one God, yea, the very Eternal Father of heaven and of earth.[18]

After Jesus was resurrected and ascended into heaven, the Book of Mormon states that he visited a group of people in the Americas, who saw that he had a resurrected, tangible body. During his visit, he was announced by the voice of God the Father, and those present felt the Holy Spirit, but only the Son was seen. Jesus is quoted,

The Book of Mormon states that Jesus, the Father and the Holy Spirit are "one."[20] The LDS Church interprets this "oneness" as a metaphorical oneness in spirit, purpose, and glory, rather than a physical or bodily unity. On the other hand, some Latter Day Saint sects, such as the Community of Christ, consider the Book of Mormon to be consistent with trinitarianism. Some scholars have also suggested that the view of Jesus in the Book of Mormon is also consistent, or perhaps most consistent, with monotheistic Modalism.[21]

Teachings in the mid-to-late 1830s

In 1835, Joseph Smith (with the involvement of Sidney Rigdon), publicly taught the idea that Jesus Christ and God the Father were two separate beings. In the Lectures on Faith, which had been taught in 1834 to the School of the Prophets, the following doctrines were presented:

Lectures on Faith were included as part of the 1835 Doctrine and Covenants. They were eventually removed from the Doctrine and Covenants by the LDS Church and the Community of Christ on the grounds that they had never explicitly been accepted by the church as canon. Most modern Latter Day Saints do not accept the idea of a two-"personage" Godhead, with the Father as a spirit and the Holy Spirit as the shared "mind" of the Father and the Son. Moreover, many Mormon apologists propose a reading of Lectures on Faith that is consistent with Smith's earlier or later doctrines, by putting various shadings on the meaning of personage as used in the Lectures.

In 1838, Smith published a narrative of his First Vision, in which he described seeing both God the Father and a separate Jesus Christ, similar in appearance to each other.

In public sermons later in Smith's life, he began to describe what he thought was the true nature of the Godhead in much greater detail. In 1843, Smith provided his final public description of the Godhead before his death, in which he described God the Father as having a physical body, and the Holy Spirit, also, as a distinct personage: "The Father has a body of flesh and bones as tangible as man's; the Son also; but the Holy Ghost has not a body of flesh and bones, but is a personage of Spirit. Were it not so, the Holy Ghost could not dwell in us."[22] Even though this quote is included in canonized LDS scripture, some dispute its authenticity, particularly that of the Holy Ghost dwelling in us, since it was not consistent with the manuscript source's wording about the Holy Ghost and underwent various revisions and modifications before arriving at this final form.[23]

During this period, Smith also introduced a theology that could support the existence of a Heavenly Mother. The primary source for this theology is the sermon he delivered at the funeral of King Follett (commonly called the King Follett Discourse). The LDS Church believes that a Heavenly Mother exists,[24][25][26] but very little is acknowledged or known beyond her existence.

Lorenzo Snow succinctly summarized another portion of the doctrine explained in the King Follett Discourse using a couplet: "As man now is, God once was: / As God now is, man may be."[27][28]

The Church of Jesus Christ of Latter-day Saints 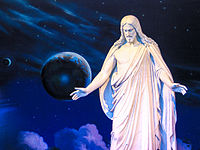 Latter-day Saints believe in the resurrected Jesus Christ, as depicted in the Christus statue in the North Visitors' Center on Temple Square in Salt Lake City
Main articles: List of Latter Day Saint movement topics and Beliefs and practices of The Church of Jesus Christ of Latter-day Saints
See also: Mormonism and Christianity and Exaltation (Mormonism)

The Church of Jesus Christ of Latter-day Saints holds Joseph Smith's explanation of the Godhead as official doctrine, which is to say that the Father and the Son have glorified physical bodies, while the Holy Ghost has only a body of spirit. The differences between the Mormon doctrine of the Godhead and that of Trinitarianism have set Mormonism apart, for which some Christian denominations reject Mormonism as a Christian faith.

Leaders and scriptural texts of the LDS Church affirm a belief in the Holy Trinity but use the word "Godhead" (a term used by the Apostle Paul in Acts 17:29; Romans 1:20, and Colossians 2:9) to distinguish their belief that the unity of the Trinity relates to all attributes, except a physical unity of beings. The Latter-day Saints believe that "The Father has a body of flesh and bones as tangible as man’s; the Son also; but the Holy Ghost has not a body of flesh and bones, but is a personage of Spirit."[29]

According to LDS teachings, this theology is consistent with Smith's 1838 and subsequent accounts of the First Vision. These accounts state that Smith saw a vision of "two personages," the Father and the Son.[30] Mormon critics view this 1838 account with skepticism, because Smith's earliest accounts of the First Vision did not refer to the presence of two beings.[31] The church also teaches that its theology is consistent with the Biblical account of the baptism of Jesus which referred to signs from the Father and the Holy Spirit,[32] which the denomination interprets as an indication that these two persons have distinct substance from Jesus.

Joseph Smith taught that there is one Godhead and that humans can have a place, as joint-heirs with Christ, through grace,[33] if they follow the laws and ordinances of the gospel.[34] This process of exaltation means literally that humans can become full, complete, joint-heirs with Jesus and can, if proven worthy, inherit all that he inherits.[35] Though humanity has the ability to become gods through the Atonement of Jesus, these exalted beings will remain eternally subject to God the Father and "will always worship" Him.[36] Among the resurrected, the righteous souls receive great glory and return to live with God, being made perfect through the atonement of Christ. Thus, "god" is a term for an inheritor of the highest kingdom of God.[37]

Church President Gordon B. Hinckley offered a declaration of belief wherein he reaffirmed the teachings of the LDS Church regarding the distinct individuality and perfect unity of the Father, the Son, and the Holy Ghost.[38]

Trinitarianism has been adopted by the Community of Christ, which is part of the Latter Day Saint movement, but not part of Mormonism.

Mormon fundamentalists seek to retain Mormon theology and practice as it existed in the late 19th century. As such, the faith accepts the Adam–God doctrine, which identifies God the Father with Adam. Within Mormon fundamentalism, Jehovah and Jesus are considered distinct and separate beings.[citation needed]

Latter-day Saints believe in an eternal cycle where God's children may progress to become "heirs of God and joint-heirs with Christ" (Romans 8:17) and thus become one with God or like God. This is commonly called exaltation within the LDS Church. In addressing this issue, former church president Gordon B. Hinckley, noted the church believes that man may become as God is. Hinckley said that growth, learning and gaining intelligence are eternal principles, and is one of the reasons why education is important to members of the LDS Church.[39]

Previous prophets or leaders of the church have made statements about their personal beliefs about exaltation. Joseph Smith taught, and Mormons believe, that all people are children of God. Smith further stated in the King Follett discourse that God was the son of a Father, suggesting a cycle that continues for eternity.[40]