The Goetheanum, located in Dornach (near Basel), Switzerland, is the world center for the anthroposophical movement. The building was designed by Rudolf Steiner and named after Johann Wolfgang von Goethe. It includes two performance halls (1500 seats), gallery and lecture spaces, a library, a bookstore, and administrative spaces for the Anthroposophical Society; neighboring buildings house the Society's research and educational facilities. Conferences focusing on themes of general interest or directed toward teachers, farmers, doctors, therapists, and other professionals are held at the center throughout the year.

Both the present Goetheanum building and its precursor have been widely cited as masterpieces of modern architecture.[1][2][3][4][5]

The Goetheanum is open for visitors seven days a week and offers tours several times daily. 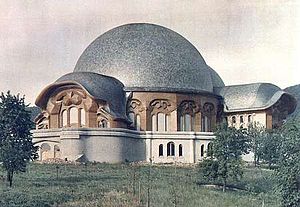 The First Goetheanum, a timber and concrete structure designed by Rudolf Steiner,[6][7] was one of seventeen buildings Steiner designed and supervised between 1908 and 1925.[8] It was intended as a Gesamtkunstwerk (the synthesis of diverse artistic media and sensory effects), infused with spiritual significance.[9] Begun in 1913 to house the annual summer theater events of the Anthroposophical Society,[10] it rapidly became the center of a small colony of spiritual seekers located in Dornach and based around Steiner.[11] Numerous visual artists contributed to the building: architects created the unusual double-dome wooden structure over a curving concrete base, stained glass windows added color into the space, painters decorated the ceiling with motifs depicting the whole of human evolution, and sculptors carved huge column bases, capitals, and architraves with images of metamorphoses.[8][12]

In the course of 1923, Steiner designed a building to replace the original. This building, now known as the Second Goetheanum, was wholly built of cast concrete. Begun in 1924, the building was not completed until 1928,[10] after the architect's death. It represents a pioneering use of visible concrete in architecture[14] and has been granted protected status as a Swiss national monument.[15] Art critic Michael Brennan has called the building a "true masterpiece of 20th-century expressionist architecture".[16]

The present Goetheanum houses a 1000-seat auditorium, now the center of an active artistic community incorporating performances of its in-house theater and eurythmy troupes as well as visiting performers from around the world. Full remodelings of the central auditorium took place in the mid-1950s and again in the late 1990s. The stained glass windows in the present building date from Steiner's time; the painted ceiling and sculptural columns are contemporary replications or reinterpretations of those in the First Goetheanum. 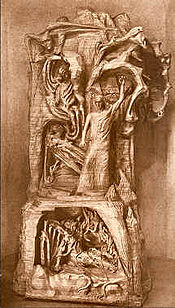 The Representative of Humanity (detail).

In a dedicated gallery, the building also houses a nine-meter high wooden sculpture, The Representative of Humanity, by Edith Maryon and Rudolf Steiner.

Steiner's architecture is characterized by a liberation from traditional architectural constraints, especially through the departure from the right-angle as a basis for the building plan. For the first Goetheanum he achieved this in wood by employing boat builders to construct its rounded forms; for the second Goetheanum by using concrete to achieve sculptural shapes on an architectural scale.[17] The use of concrete to achieve organically expressive forms was an innovation for the times; in both buildings, Steiner sought to create forms that were spiritually expressive.[18]

Steiner suggested that he had derived the sculptural forms of the first Goetheanum as spiritual inspirations.[19]

Steiner designed approximately 12-13 other built structures, principally residences in and around Dornach[18] as well as purpose built buildings such as the Glass House which houses the School of Spiritual Sciences.[20] Steiner is one of very few major architects[21] who was never the pupil of another major architect.[22]