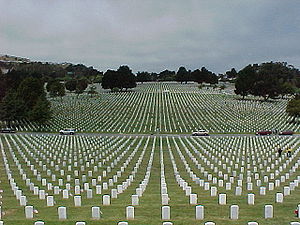 A view out from the center of the cemetery 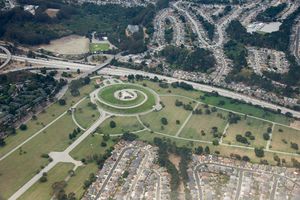 Congress authorized construction of the facility in 1937, with the first interments in 1941. The cemetery was officially dedicated on Memorial Day, May 30, 1942. California Attorney General Earl Warren (later Governor, then Chief Justice of the United States) was keynote speaker at the ceremony. Golden Gate is one of a large number of U.S. Army-planned cemeteries started in the 1930s and completed during the 1940s. They were designed specifically to provide abundant burial opportunities in locations around the nation in cities with very large veteran populations.

As of 2005, the cemetery held 137,435 interments. Over the years, several attempts to expand Golden Gate National Cemetery were met with resistance from local residents, so it has remained at its original 161.5 acres (0.654 km2) since 1941.

Ironically, a number of service members who are buried at the Golden Gate National Cemetery were interned in the stables at the nearby Tanforan Racetrack during the early part of the Japanese American internment.

Also notable is that the Golden Gate National Cemetery was the first cemetery to initiate the large flag display on Memorial Day. Flags are raised around the base of the hill in the center of the cemetery and small flags are placed on each grave site by various scout volunteers. This practice was created and put into effect by John T. Spelman, the superintendent of the cemetery at the time.

The American Veterans donated a Schulmerich carillon to the cemetery as part of their worldwide living memorial carillon program. The carillon was dedicated May 30, 1958.

(Dates are of the actions for which they were awarded the Medal of Honor.) 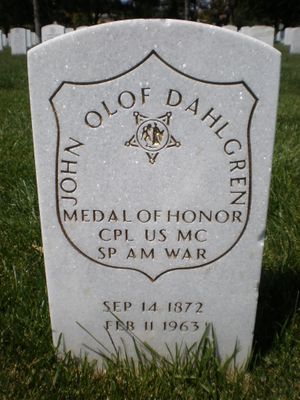 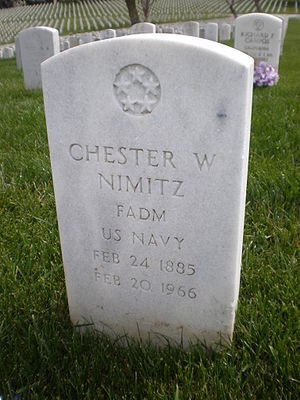