Gonesse is a commune in the northeastern suburbs of Paris, France. It is located 16.5 km (10.3 mi) from the centre of Paris.

Since Carolingian times, cereals have been grown in Gonesse. In the period of the 12th through the 16th centuries, the cultivation of grain was supplemented by drapery, in particular the production of the coarse woolen material of the gaunace.[2] The commune was an important producer of wheat for the Parisian market in modern times, until the decline of its bakery trade at the end of the 18th century helped feed a strong migration to the capital.[2] 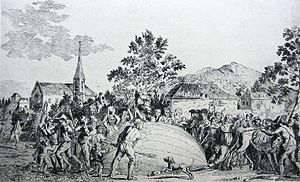 Le Globe, built by Jacques Charles and the Robert brothers, is attacked by terrified villagers.

The world's first hydrogen filled balloon — the unmanned Le Globe, launched by Jacques Charles and the Robert brothers on the Champ de Mars in Paris on 27 August 1783 — flew for forty-five minutes and landed in Gonesse, where the reportedly terrified local peasants destroyed it with pitchforks. This caused the government to issue a statement on the harmlessness and the scientific value of such experiments.

In 1815, Marshal Grouchy arrived in Gonesse in the course of the War of the Sixth Coalition, with 40,000 troops and 120 artillery pieces. On 2 July, the Duke of Wellington made his headquarters at the commune.

Since June 1939, the property Frapart (the Castle) is used as the main establishment of the urban administration.[2]

Jean Camus, Louis Furmanek, Pierre Lorgnet, and Albert Drouhot from Gonesse belonged to the French Resistance movement during the German occupation of France from 1940 to 1944.

On 25 July 2000, Air France Flight 4590 — a Concorde supersonic transport — crashed onto a hotel in the town after a tyre blew out, caused by running over a strip of metal that had fallen off a DC-10 at nearby Charles de Gaulle International Airport.[3] The crash led to the deaths of all 109 people on board and four more on the ground.[4] The Concorde crash occurred less than 6 km from Goussainville, the site of the crash of the supersonic Tupolev Tu-144 during the 1973 Paris Air Show.

Gonesse is twinned with the town of Leonessa in Rieti / Italy, since 1981.[5] 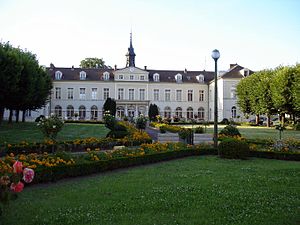 Among the places worthwhile to visit in the town are the Church of St. Peter and St. Paul, the old Hotel-Dieu, the Hotel-Dieu, the lofts Garlande and Orgemont, and the estates of Malmaison and of Coulanges.

Gonesse is served neither by the Paris Métro, RER, nor the suburban rail network. The closest station is the Villiers-le-Bel – Gonesse – Arnouville station on the Paris RER line D. This station is located in the neighbouring commune of Arnouville-lès-Gonesse, 2.6 km (1.6 mi) from Gonesse town centre.