Gorky Film Studio (Russian: Киностудия имени Горького) is a film studio in Moscow, Russian Federation. By the end of the Soviet Union, Gorky Film Studio had produced more than 1,000 films. Many film classics were filmed at the Gorky Film Studio throughout its history and some of these were granted international awards at various film festivals.

In 1924, the Rus' studio was renamed into the International Workers Relief agency (Russian: Международная рабочая помощь (Межрабпом)), abbreviated as Mezhrabpom-Rus' (Russian: Межрабпом-Русь). The first Soviet (sci-fi) film, Aelita, was filmed at this studio in 1924.

Four years later, the studio was renamed Mezhrabpomfilm (Russian: Межрабпомфильм), changing its name once again in 1936 to Soyuzdetfilm (Russian: Союздетфильм), the world's first film studio which specialized in films for children. The first soviet sound film, Ticket for Life, was made there in 1931. Five years later, the first soviet color film, Grunya Kurnakova, followed.

During World War II the film studio was evacuated to Dushanbe and merged with Tadjikfilm. Upon returning to Moscow, the studio was given the name of Maxim Gorky (in 1948). Between 1963 and 2004 its full name was Maxim Gorky Central Film Studio for Children and Youth (Russian: Центральная киностудия детских и юношеских фильмов им. М. Горького).

Since the 1950s, the Gorɢky Film Studio has been involved into dubbing foreign features. A humorous "film-magazine" for children, Yeralash, has been filmed at this studio since 1975. Until the fall of the Soviet Union, the Gorky Studio had a branch in Yalta. The studio survived the dissolution of the USSR; it is now a private venture.

By the end of the Soviet Union, Gorky Film Studio had produced more than 1,000 films. Many film classics were shot at Gorky Film Studio throughout its history and some of these were granted international awards at various film festivals. 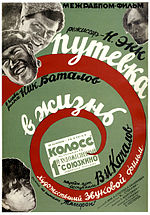