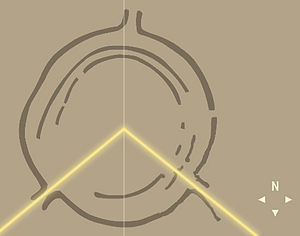 Site of the Goseck circle. The yellow lines represent the direction the Sun rises and sets at the winter solstice, while the vertical line shows the astronomical meridian 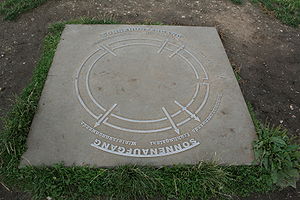 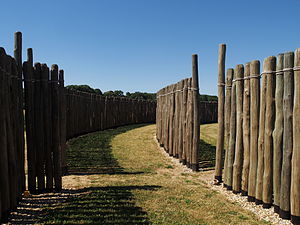 A view inside the reconstructed wooden palisade of the circle. 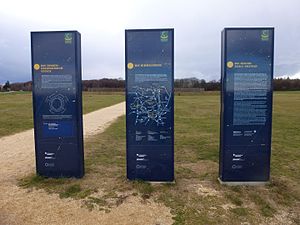 Information boards at the entrance of the solar observatory of Goseck

The Goseck circle is a Neolithic structure in Goseck in the Burgenlandkreis district in Saxony-Anhalt, Germany. It may be the oldest and best known of the Circular Enclosures associated with the Central European Neolithic. It also may be one of the oldest Solar observatories in the world.[1][2][3] It consists of a set of concentric ditches 75 metres (246 feet) across and two palisade rings containing gates in places aligned with sunrise and sunset on the solstice days.

Its construction is dated to approximately the 49th century BC, and it seems to have remained in use until about the 47th century BC. This corresponds to the transitional phase between the Neolithic Linear Pottery and Stroke-ornamented ware cultures. It is one of a larger group of so-called Circular Enclosures in the Elbe and Danube region, most of which show similar alignments.

The existence of the site was made public in August 2003, and it was opened for visitors in December 2005.

The first sign of the circle was a 1991 aerial survey photograph that showed circular ridges under a wheat field. The cropmarks were easy to see in a season of drought. François Bertemes and Peter Biehl of the University of Halle-Wittenberg began a major excavation of the site in 2002. When archaeologists combined the evidence with GPS observations, they noticed that the two southern openings marked the sunrise and sunset of the winter solstice and summer solstice.

Radiocarbon dating places the construction of the site close to 4900 BC, while the style of the pottery shards associate it with the Stroke-ornamented ware culture of ca. 4700 BC, suggesting that the site remained in use during two or three centuries.[4]

Excavators also found the remains of what may have been ritual fires, animal and human bones, and a headless skeleton near the southeastern gate, that could be interpreted as traces of human sacrifice[5] or specific burial ritual.

There is no sign of fire or of other destruction, so why the site was abandoned is unknown. Later villagers built a defensive moat following the ditches of the old enclosure.

Bertemes and Biehl have continued the excavation for a few weeks each year. In 2004 a group from the University of California, Berkeley, joined the ongoing dig, giving it an international scope. Archaeologists and state officials have reconstructed the wooden palisade of the circle. Woodworkers worked with hand tools so that the wooden posts would look more authentic. The site was opened to the public on 21 December 2005, the winter solstice.

The Goseck ring is one of the best preserved and extensively investigated of the many similar structures built at around the same time. In the first opening of the site, a state archaeologist Harald Meller called it "a milestone in archaeological research".

Traces of the original configuration reveal that the Goseck ring consisted of four concentric circles, a mound, a ditch, and two wooden palisades. The palisades had three sets of gates facing southeast, southwest, and north. At the winter solstice, observers at the center would have seen the sun rise and set through the southeast and southwest gates.

Archaeologists generally agree that Goseck circle was used for observation of the course of the Sun in the course of the solar year. Together with calendar calculations, it allowed coordinating an easily judged lunar calendar with the more demanding measurements of a solar calendar.[6]