Goulash Communism (Hungarian: gulyáskommunizmus) or Kadarism[1] (after János Kádár) refers to the variety of communism as practised in the Hungarian People's Republic, from the 1960s until the Central European collapse of communism in 1989. With elements of free market economics, as well as an improved human rights record, it represented a quiet reform and deviation from the Soviet principles applied to Hungary in the previous decade.

The name is a semi-humorous metaphor derived from "goulash", a popular Hungarian dish. As goulash is made with an assortment of unlike ingredients, it represents how Hungarian communism was a mixed ideology and no longer strictly adhering to Marxist interpretations as in the past.[2] Sometimes described as "the happiest barrack in the socialist camp," Hungary in this particular period enjoyed many amenities not available in the rest of Eastern Bloc. 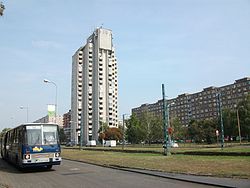 The physical legacy of the socialist system in present-day (2009) Hungary, in the form of an Ikarus Bus and panelház, Budapest-Újpalota

In 1962, six years after the Hungarian Revolution of 1956, the 8th Congress of the Hungarian Socialist Workers' Party declared the period of "consolidation of socialism" after 1956 to be over and that the "foundations for the establishment of a socialist society" had been achieved which enabled a general amnesty of most people sentenced in connection with 1956. The party, under János Kádár, gradually curbed some of the excesses of the secret police and repealed most of the restrictions on speech and movement enacted in the Mátyás Rákosi era. In their place, the party introduced a relatively liberal cultural and economic course aimed at overcoming the post-1956 hostility toward the Kádár government.[3]

In 1966, the Central Committee approved the "New Economic Mechanism" which eased foreign trade restrictions, gave limited freedom to the workings of the market, and allowed a limited number of small businesses to operate in the services sector. Though liberal in comparison to soviet socialism, the first relaxation of economic control was far from posing the same threat of the 1956 reforms. Official policy employed different methods of administering the collectives, leaving the pace of mechanization up to each cooperative.[3]

Additionally, rather than enforcing the system of compulsory crop deliveries and of workdays credit the collectivizers used monthly cash wages.[3] Later in the ‘60s, cooperatives were permitted to enter into related and then general auxiliary businesses such as food processing, light industry, and service industry.[3]

Goulash Communism showed a far greater concern for public opinion and an increased focus on the present (rather than future) material well-being of the citizens than had been the case in the period preceding 1956. It provided a wider latitude for dissent than was the case in the rest of the Soviet bloc (in the words of Kádár, "who is not against us is with us"), modified the role of the Communist Party in the development of socialism (now interpreted as "serving" rather than "commanding"), reduced the formality of relations between the party and the populace at large, increased the scope of societal self-expression and self-management, and refined the guiding Marxist-Leninist ideology with modified means of dissemination. Marxist-Leninist ideology is invoked in the desire to reform as seen in Imre Nagy’s 'Reform Communism' (1955-6). He argues that Marxism is a “science that cannot remain static but must develop and become more perfect”.[4]

He attributes Marx to having created a method, meant to guide yet not entirely encompass socialism or its development. “The theory of Marx - as Lenin stated – gives general guiding principles, which must be utilized in Britain in another fashion than in France, in France differently than…”.[4] This interpretation was not shared by the Soviet leadership, Nikita Khrushchev’s response to Hungary in 1956 and Leonid Brezhnev’s to Czechoslovakia in 1968 and the resulting Brezhnev Doctrine stating that though “each socialist country had the right to determine the concrete form of its development along the path of socialism by taking account of the specific nature of their national conditions… the Soviet Union would not tolerate deviation from the principles of socialism and the restoration of capitalism”.[5]

The result was a regime far less controlling than other Communist regimes—and certainly more so than the first seven years of undisguised Communist rule in Hungary. Generally, Hungarians had much more freedom to speak, write and travel than their counterparts in the Soviet bloc. For instance, samizdat publications were tolerated to some extent, and conversations with foreigners didn't attract much official scrutiny. However, while Kádár's regime was not nearly as repressive as most of its counterparts, it wasn't a liberal one either. The Communist Party still retained a monopoly of power, with the National Assembly being little more than a rubber stamp for decisions already made by the MSZMP and its Politburo. The media, while having somewhat more latitude than in other Communist regimes, were still subjected to fairly onerous restrictions. The secret police operated with somewhat more restraint than in other Communist states, but were still a feared tool of control.

Hungary's economic resources were mobilized to better satisfy consumer demand by providing a more extensive assortment of consumer goods. Some economic reform measures were introduced to integrate limited market mechanisms into the framework of the planned socialist economy. An unfortunate result of this policy were rising economic stresses and high indebtedness which became evident by the late 1980s. Yet these economic crises were prevalent throughout the collapsing communist world. Hungary’s mild diversity left it slightly better equipped.

Being a comparatively well-off country in the Eastern bloc, Hungary was the destination for tourists from other communist nations for whom visits to the West were much more difficult. Queues for groceries, for instance, were virtually non-existent, unlike in other communist countries in the 1960s and 1970s.

Since 1989, after the general disintegration of communist control in Central Europe, Hungary has adopted a Western-style multiparty political system and introduced thorough reforms aimed at establishing a capitalist market economy, enabling European Union membership and integration into a global market economy.