The government of Indiana is established and regulated by the Constitution of Indiana. The state-level government consists of three branches, the judicial branch, the legislative branch, and the executive branch. The three branches balance/share power and jointly govern the state of Indiana. County and local governments are also constitutional bodies with limited authority to levy taxes, pass legislation, and create and maintain local public infrastructure.

The government of Indiana was first formed in December 1816 and replaced the government of the Indiana Territory. The early government came under criticism beginning as early as the 1820s for having many public offices filled by appointment and lack of delegation of authority to lower officials, requiring state level legislation for things like divorce approval. In 1851 a new constitution was adopted by the state, remedying many of these problems and opening many more office to public election. Significant government reforms were enacted again in 1971 when the state courts were reorganized and new powers were granted to the governor which had historically been a weak institution.

Elections to fill positions in Indiana's government are held biennially on Election Day, with special elections being occasionally held to fill unexpected vacancies. State representatives serve two-year terms, while all other elected state, county, and municipal officials serve four-year terms. Most of the positions in the government bureaucracy are filled through the state merit system or the state patronage system.

The government provides a wide range of services including law enforcement, infrastructure construction and maintenance, licensing and registration of numerous things, tax collection, fire protection, business and utility regulation, utility services, and park and conservation maintenance efforts. As of December 2009, the state government had 30,454 full-time employees, down 14% since 2005.[1] 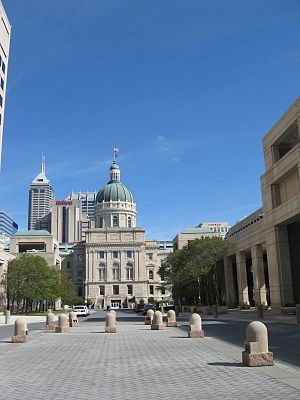 The government of Indiana sits in the state capital of Indianapolis. Each of the three branches operates out of the Indiana Statehouse. The state maintains several office buildings that hold many of its bureaus and departments. Most of the state's bureaus are located in the Indiana Government Center North, a high-rise tower in downtown Indianapolis.

Members of the General Assembly are elected from districts that are realigned every ten years. Representatives serve two-year terms; senators serve four-year terms. Both houses must pass a bill before it can be submitted to the governor and enacted into law.

The Supreme Court of Indiana is the highest judicial body in Indiana. The court oversees the lower courts and commissions that jointly make up the judicial branch. The other courts include the Indiana Tax Court, the Indiana Court of Appeals, and circuit, superior, and city or town courts.[2] The courts are assisted by several commissions that are also part of the judicial branch, including the Judicial Nominating Commission.

The Governor of Indiana is the chief executive officer of the government of Indiana. Elected to a four-year term, the Governor is responsible for overseeing the day-to-day management of the functions of the state government. The governor is assisted by other officials elected to the executive branch including the Lieutenant Governor and the Attorney General. 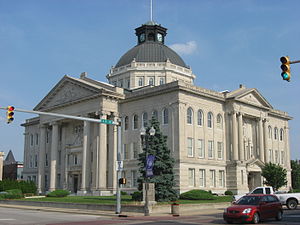 County governments are made up of two bodies.

County Council: A county council of seven to fifteen members controls all spending and revenue of the county government. Four of the representatives are elected from county districts; the other three representatives are elected at large. The council members serve four-year terms. They are responsible for setting salaries, the annual budget, and special spending. The council also has limited authority to impose local taxes, usually in the form of an income tax that is subject to state level approval, excise taxes, or service taxes, like those on dining or lodging.[3][4]

Commissioners: The executive body consists of three to five commissioners. The commissioners are elected county wide, usually in staggered terms, and serve four-year terms. One of the commissioners, typically the most senior, serves as president. They are charged with executing the acts legislated by the council and managing the day-to-day functions of the county government.[3][4]

Counties also employee boards to oversee different aspects of the county. These boards are usually filled by direct election from the public, appointment by the commission, or a combination of both methods. Boards typically oversee management of water facilities, public roads, and new projects, among others tasks. Each school district has a board that is elected by public election. County school boards are responsible for funding and management of the public school system within their district. The majority of school funding comes from property taxes imposed by the board on the district. The tax rate is subject to state level approval and is capped, by law, at 1% of property value.

Court: Most counties form judicial circuits of the state, and have a circuit court formed pursuant to the Indiana state constitution. Some counties also have Superior Courts. The circuit and superior courts are courts of general jurisdiction. Several counties, including Marion County, also have dedicated small claims courts at the county level, in addition to city courts and town courts with statutorily defined jurisdiction.

County Officials: The county has several other elected offices, including sheriff, coroner, auditor, treasurer, recorder, surveyor, and circuit court clerk. Each of these elected officers serves a term of four years and oversees a different part of the county government. Members elected to county government positions are required to declare party affiliations and to be residents of the county.[4]

Many small communities in Indiana are incorporated as towns. A town includes a three- or five-member Town Council serving primarily as the legislature function of government. For practical reasons, the Town Council may share in some of the executive functions. However, under statute, the role of the executive officer belongs to the President of the Town Council. The President of the Town Council is an elected member of the town selected by his fellow town councilmen to lead the council. The council may appoint a non-partisan town manager to oversee the day-to-day operations of the municipal government. The council is responsible for setting the town's budget and tax rates, and appointing all town employees.

Unlike some states, Indiana council members must declare a political party affiliation, if any, when they file to run for office. Upon election in November, they are sworn in before January 1 of the following year, where they serve a four-year term. There are no state term limits affecting how many times a candidate may run for reelection to office.

A town also elects a clerk/treasurer, who manages the town's finances. As an elected official, the clerk/treasurer is solely executive in function and operates independently of the town council, but operates within the council-approved budget.

Most larger communities are incorporated as cities. A city can be either a third-class city or a second-class city (the first-class designation is reserved for Indianapolis). Classification of cities is according to the Indiana Code, differentiated primarily by population. Large cities are first class, medium cities are second class, and small cities are third class. An Indiana city has a mayor-council form of government, but a third-class city may appoint a city manager. The mayor, elected to a four-year term, serves as the executive. Most mayors in Indiana are elected in partisan elections. The legislative branch consists of a five-, seven-, or nine-member City Council. Council members serve four-year terms, and may be elected by geographic districts or at-large. Most cities in Indiana use districts.

A township trustee administers the civil government of the township. The trustee is elected by the residence of the township to a term of four years. The trustee is responsible for providing fire protection and ambulance service to unincorporated areas, providing for poor relief and burial of the indigent, maintaining cemeteries and burial grounds, resolving fencing disputes between neighbors, investigating claims of livestock killed by dogs, controlling weeds, managing the township budget and financial records, and preparing an annual financial report. The trustee also acts as the property tax assessor. Other public matters in which a trustee may sometimes be involved include zoning, parks, libraries, schools, shelters and community centers.

The trustee is assisted by a three-member Township Board whose members are elected to four-year terms. Duties of the board include adopting the annual budget, serving as a board of finance and approving township contracts. In January of each year, the trustee presents to the board an annual report showing the receipts, expenditures, investments and debts of the township. The approved report is then published in local papers for public inspection.

The current governor of Indiana is Mike Pence, Indiana has long been considered to be a Republican stronghold and is rated R+7 on the Cook Partisan Voting Index. It has only supported a Democrat for president five times since 1900 - in 1912, 1932, 1936, 1964 and 2008. Nonetheless, half of Indiana's governors in the 20th century were Democrats.

Historically, Republicans have been strongest in the eastern and central portions of the state, as well as the suburbs of the state's major cities. Democrats have been strongest in the northwestern and southern parts of the state along with the major cities. However, outside of Indianapolis, the Chicago suburbs, and Bloomington, the state's Democrats tend to be somewhat more conservative than their counterparts in the rest of the country, especially on social issues.[citation needed]

Indiana's delegation to the United States House of Representatives is not completely Republican either. Instead, it has generally served as a bellwether for the political movement of the nation. For instance, Democrats held the majority of seats until the 1994 Republican Revolution, when Republicans took a majority. This continued until 2006, when three Republican congressmen were defeated in Indiana; (Chris Chocola, John Hostettler and Mike Sodrel), giving the Democrats a majority of the delegation again.[5]

Former governor and U.S. Senator Evan Bayh announced in 2006 his plans for a presidential exploratory committee.[6] His father was a three-term senator who was turned out of office in the 1980 Reagan Revolution by conservative Republican (and future Vice-President) Dan Quayle, a native of Huntington in the northeastern part of the state. However, Bayh announced that he would not be seeking the Presidency on December 16, 2006.

The state's U.S. Senators are Senior Sen. Dan Coats (Republican) and Junior Sen. Joe Donnelly (Democratic). Both Senators have proved popular in the state. In 2010, Sen. Coats won reelection to a third non-consecutive term with 55% of the vote against Democratic Congressman Brad Ellsworth and Libertarian business owner and teacher Rebecca Sink-Burris.