The government carries out the country’s domestic and foreign policy, shaped by the National Assembly; it directs and co-ordinates the work of government institutions and bears full responsibility for everything occurring within the authority of executive power. The government, headed by the Prime Minister, thus represents the political leadership of the country and makes decisions in the name of the whole executive power.

The following duties are attributed to the government:

The cabinet was sworn on 18 September 2014. Since then the prime minister of the government is Miro Cerar. There are two deputy prime ministers: Karl Erjavec and Dejan Židan. Both deputy prime ministers are also government ministers. The coalition was formed by three parties: Party of Miro Cerar (SMC), Democratic Party of Pensioners of Slovenia (DeSUS) and Social Democrats (SD). At the inauguration the government consisted of 16 ministers, two of them without portfolio, with men:women ratio 9:7. The cabinet had on the day of the naming the highest number of female ministers to date in modern Slovenian history.

First Slovenian Government in the State of Slovenes, Croats and Serbs 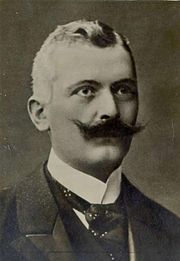 Slovenian National Council (Slovene: :Slovenski narodni svet) was the first executive council established in Slovenia, though it never became Slovenian parliament. The Council named on the 31. of October 1918 the first slovene National government (Slovene: :Narodna vlada). Knight Josip Pogačnik was named as the first slovene prime minister in the State of Slovenes, Croats and Serbs (SHS). The government, that had full organizational capabilities, took care of peace and order, economy, transport, education, food, science, culture and other public affairs. The Cabinet consisted of 12 departments called poverjeništva, that were led by representatives of all major Slovenian parties at the time. The government was active until 20. January 1919, when it was relieved by the new government of Kingdom of Serbs, Croats and Slovenes in Belgrade.[1]

See also: Prime Minister of Slovenia and List of cabinets of Slovenia