In the United States, a governor serves as the chief executive officer in each of the fifty states and in the five permanently inhabited territories, functioning as both head of state and head of government therein.[nb 1] As such, governors are responsible for implementing state laws and overseeing the operation of the state executive branch. As state leaders, governors advance and pursue new and revised policies and programs using a variety of tools, among them executive orders, executive budgets, and legislative proposals and vetoes. Governors carry out their management and leadership responsibilities and objectives with the support and assistance of department and agency heads, many of whom they are empowered to appoint. A majority of governors have the authority to appoint state court judges as well, in most cases from a list of names submitted by a nominations committee.[1]

States are the primary subdivisions of the United States, and possess a number of powers and rights under the United States Constitution, such as regulating intrastate commerce, running elections, creating local governments, and ratifying constitutional amendments. Each state has its own constitution, grounded in republican principles, and government, consisting of three branches: executive, legislative, and judicial.[2] Also, due to the shared sovereignty between each state and the federal government, Americans are citizens of both the federal republic and of the state in which they reside.[3]

The governor heads the government's executive branch in each state or territory and, depending on the individual jurisdiction, may have considerable control over government budgeting, the power of appointment of many officials (including many judges), and a considerable role in legislation. The governor may also have additional roles, such as that of commander-in-chief of the state's National Guard (when not federalized) and of that state's respective defense force (which is not subject to federalization). In many states and territories the governor also has partial or absolute power to commute or pardon a criminal sentence. All U.S. governors serve four-year terms except those in New Hampshire and Vermont, who serve two-year terms.

In all states, the governor is directly elected, and in most cases has considerable practical powers, though this may be moderated by the state legislature and in some cases by other elected executive officials. In the five extant U.S. territories, all governors are now directly elected as well, though in the past many territorial governors were historically appointed by the President of the United States. Governors can veto state bills, and in all but seven states they have the power of the line-item veto on appropriations bills (a power the President does not have). In some cases legislatures can override a gubernatorial veto by a two-thirds vote, in others by three-fifths.

In Alabama, Indiana, Kentucky, and Tennessee, the governor's veto can be overridden by a simple majority vote, making it virtually useless. In Arkansas, a gubernatorial veto may be overridden by an absolute majority. The Governor of North Carolina had no veto power until a 1996 referendum. In 47 of the 50 states, whenever there is a vacancy of one of the state's U.S. Senate seats, that state's governor has the power to appoint someone to fill the vacancy until a special election is held; the governors of Oregon, Alaska, and Wisconsin do not have this power.[4]

A state governor may give an annual State of the State address in order to satisfy a constitutional stipulation that a governor must report annually (or in older constitutions described as being "from time to time") on the state or condition of the state. Governors of states may also perform ceremonial roles, such as greeting dignitaries, conferring state decorations, issuing symbolic proclamations or attending the state fair. The governor may also have an official residence (see Governor's Mansion).

In a ranking of the power of the governorship in all 50 states, University of North Carolina political scientist Thad Beyle makes the distinction between "personal powers" of governors, which are factors that vary from person to person, season to season - and the "institutional powers" that are set in place by law. Examples of measurable personal factors are how large a governor's margin of victory was on election day, and where he or she stands in public opinion polls. Whether a governor has strong budget controls, appointment authority, and veto powers are examples of institutional powers.[5]

In colonial North America, governors were chosen in a variety of ways, depending on how the colony was organized. In the crown colonies of Great Britain, France, and Spain, the governor was chosen by the ruling monarch of the colonizing power, or his designees; in British colonies, the Board of Trade was often the primary decision maker. Colonies based on a corporate charter, such as the Connecticut Colony and the Massachusetts Bay Colony, elected their own governors based on rules spelled out in the charter or other colonial legislation. In proprietary colonies, such as the Province of Carolina before it became a crown colony (and was divided into North and South), governors were chosen by the Lords Proprietor who controlled the colony. In the early years of the American Revolutionary War, eleven of the Thirteen Colonies evicted (with varying levels of violence) royal and proprietary governors. The other two colonies (Connecticut and Rhode Island) had corporate charters; Connecticut Governor Jonathan Trumbull was governor before and during the war period, while in Rhode Island, Governor Joseph Wanton was removed from office in 1775 for failing to support the rebel war effort. 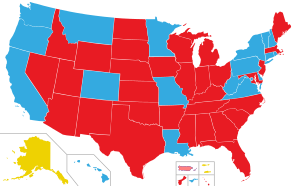 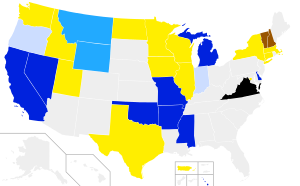 For each term, governors serve four years in office. The exceptions are Vermont and New Hampshire where tenures are two years long.

In the majority of states, Gubernatorial term limits cap a governor's tenure.

The youngest person to ever serve as a governor in the United States was Stevens T. Mason of the Michigan Territory, elected in 1835 having just turned 24. Mason would later become the first governor of the state of Michigan when it was admitted to the Union in January 1837, when he was 25. Mason was re-elected in November 1837, then age 26.[6]

In 35 states, the minimum age requirement of the governor is 30, though in some it is 25 (7), 21 (1), or 18 (5). Oklahoma is the only state with an older age, 31. Some states require the governor to be a qualified elector/voter, implying a minimum age of 18. Kansas and Vermont do not have an explicit or implicit age requirement. 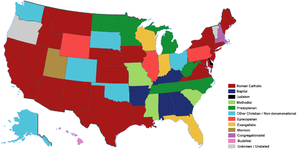 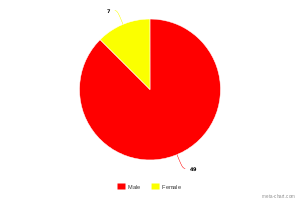 State and territorial governors and governor-equivalents by gender

There are currently 44 male state governors. There are 6 female governors: Kate Brown of Oregon, Mary Fallin of Oklahoma, Nikki Haley of South Carolina, Maggie Hassan of New Hampshire, Susana Martinez of New Mexico, and Gina Raimondo of Rhode Island. Of those, Fallin, Haley, and Martinez are Republicans, while Brown, Hassan, and Raimondo are Democrats.

All five territorial governors are male; the mayor of Washington, D.C. is female.

Thirty-six women have been or are currently serving as the governor, including two in an acting capacity.

The first female governor was Nellie Tayloe Ross of Wyoming who was elected on November 4, 1924 and sworn in on January 5, 1925. She was preceded in office by her late husband William B. Ross. Also elected on November 4 was Miriam A. Ferguson of Texas, succeeding her impeached husband James Edward Ferguson, but she was not sworn in until January 21, 1925. The first female governor elected without being the wife or widow of a past state governor was Ella T. Grasso of Connecticut, elected in 1974 and sworn in on January 8, 1975. 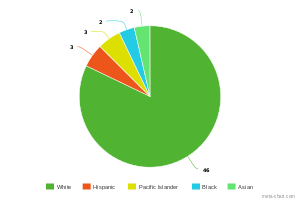 State and territorial governors and governor-equivalents by ethnicity

Among the 50 current governors, 46 are non-Hispanic whites of European American background. The other 4 governors include two Hispanic-Americans (Susana Martinez of New Mexico and Brian Sandoval of Nevada), one American of Indian descent (Nikki Haley of South Carolina), and one person of Japanese descent (David Ige of Hawaii).

Among the five U.S. territories, one Hispanic (Alejandro Garcia Padilla of Puerto Rico), one black (Kenneth Mapp of the U.S. Virgin Islands), and two Pacific Islander Americans (Eddie Calvo of Guam and Lolo Letalu Matalasi Moliga of American Samoa) currently serve as governor. African-American Muriel Bowser is the current Mayor of the District of Columbia, an office equivalent to a governor.

In 1990, Douglas Wilder of Virginia became the first African-American governor of any state since Reconstruction.

15 of the current state governors were born outside the state they are serving: Doug Ducey of Arizona (born in Ohio), John Hickenlooper of Colorado (born in Pennsylvania), Rick Scott of Florida (born in Illinois), Matt Bevin of Kentucky (born in Colorado), Larry Hogan of Maryland (born in Washington, D.C.), Charlie Baker of Massachusetts (born in New York), Brian Sandoval of Nevada (born in California), Maggie Hassan of New Hampshire (born in Massachusetts), Susana Martinez of New Mexico (born in Texas), Jack Dalrymple of North Dakota (born in Minnesota), John Kasich of Ohio (born in Pennsylvania), Mary Fallin of Oklahoma (born in Missouri), Kate Brown of Oregon (born in Spain), Terry McAuliffe of Virginia (born in New York), and Scott Walker of Wisconsin (born in Colorado).

State constitutions have varying requirements for the length of citizenship and residency of the governor but unlike the President, state governors do not need to be natural-born citizens. There is some ambiguity in some state constitutions if a governor must be a citizen or just a resident.

Two legally blind governors have served: Bob C. Riley, who was acting governor of Arkansas for eleven days in January 1975, and David Paterson, who was governor of New York from 2008 until 2010.

The current governor of Texas, Greg Abbott, has been paraplegic since an accident in 1984; he has used a wheelchair ever since. Governor of New York Franklin D. Roosevelt was paraplegic; he later became the first wheelchair-using president.

The average salary of a state governor in 2009 was $124,398. The highest salary currently being accepted is that of Pennsylvania Governor Tom Wolf at $187,256. The lowest salary is that of Maine Governor Paul LePage at $70,000.[8] Only five states (New York, New Jersey, Michigan, Pennsylvania and Virginia) currently offer their governors a higher salary than the $174,000 paid to members of Congress. In many states, the governor is not the highest-paid state employee; most often, that distinction is held by the head football or men's basketball coach at a major state university. As of January 2013[update], five football coaches at public institutions were earning over $4 million annually, with Nick Saban of the University of Alabama being the highest-paid at slightly over $5.3 million;[9] in basketball, the University of Kentucky's John Calipari is the highest-paid at $5.2 million.[10]

The other 48 states hold gubernatorial elections every four years.