Federal State Unitary Enterprise "Goznak" (short for Государственный знак, or State Insignia) is a Unitary enterprise in Russia, 100% government-owned, responsible for the manufacturing of security products, including banknotes, coins, stamps, ID-cards, secure documents, state orders and medals, as well as providing secure IT services. [1] It incorporates 7 factories and 1 R&D institute involved in different stages of the development, research, manufacturing cycle. 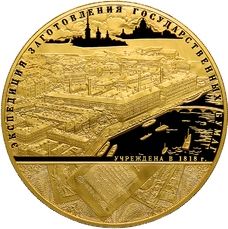 During the reign of Peter the Great, the Russians established the Saint Petersburg Mint in 1724, which would centralize coinage in Russia and begin to produce different kinds of badges and medals used for decoration.

In 1818, on September 4 (August 21 Old Style) in Saint-Petersburg the Expedition of Storing State Papers (Экспедиция заготовления государственных бумаг) was founded by the Decree of Emperor Alexander I under the authority of the Ministry of Finance; Dmitry Guriev, Minister of Finance, assigned engineer Agustín de Betancourt to design and build the modern, steam-powered currency printshop.

In 1838, a Russian academician Moritz von Jacobi (known as Boris Yakobi in Russia), employed at this Department, used his invention of galvanoplastics to produce printing plates for the first time in printing history. In the 1890s, an employee of the Department Ivan Orlov invented and developed a new printing method called "Orlov's printing" (Орловская печать). Also, he built multicolor printing presses, which would serve as a prototype for modern multicolor printing presses. Orlov's machines were still in use in some countries in the 1970s.

After the October Revolution of 1917, the Department of State Currency Production was reorganized and renamed Goznak (short for Государственный знак, literally State Ensign or Insignia). Although the initial scope of Goznak had been the production of bank notes, the production of coins was added to its field of operation in 1941, when the Leningrad mint was taken over by Goznak.[2] Goznak had its own All-union Research Institute in Moscow. In the 1920s, a Goznak employee and a prominent Soviet sculptor Ivan Shadr created the first samples of the Soviet money. In the 1950s – 1960s, an employee of the Goznak’s Moscow Printing Factory V.A.Oleynik invented an original money counting device, which would be further developed by other workers of the All-union Research Institute. Thus, all of the paper and printing factories and mints of the Goznak were equipped with the counting machines.

In 1997, Perm Printing Factory launched telecards for public telephones. During the first year of the new site more than one million cards were produced. The quality of cards is fully in line with the international standard.

On March 3, 2008 Goznak has become a strategic enterprise of Russia.

On June 5, 2014 the Russian President Putin signed a decree on the transformation of the company from the status of Federal State Unitary Enterprise to Open Joint Stock Company "Goznak", 100% of which is owned by the federal government.