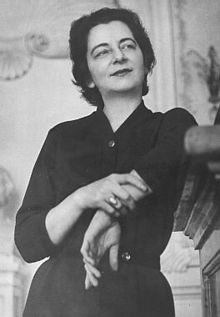 Grażyna Bacewicz (Polish pronunciation: [ɡraˈʐɨna baˈt͡sɛvit͡ʂ]; 5 February 1909 – 17 January 1969) was a Polish composer and violinist. She is only the second Polish female composer to have achieved national and international recognition, the first being Maria Szymanowska in the early 19th century.

Bacewicz was born in Łódź. Her father and her brother Vytautas, also a composer, identified as Lithuanian and used the last name Bacevičius; her other brother Kiejstut identified as Polish. Her father, Wincenty Bacewicz, gave Grażyna her first piano and violin lessons (Anon. 2014). In 1928 she began studying at the Warsaw Conservatory, where she studied violin with Józef Jarzębski and piano with Józef Turczyński, and composition with Kazimierz Sikorski, graduating in 1932 as a violinist and composer (Thomas 2001). She continued her education in Paris, having been granted a stipend by Ignacy Jan Paderewski to attend the École Normale de Musique (Anon. 2014), and studied there in 1932–33 with Nadia Boulanger (composition) and André Touret (violin). She returned briefly to Poland to teach in Łódź, but returned to Paris in 1934 in order to study with the Hungarian violinist Carl Flesch (Thomas 2001).

After completing her studies, Bacewicz took part in numerous events as a soloist, composer, and jury member. From 1936 to 1938 she was the principal violinist of the Polish Radio Orchestra, which was directed then by Grzegorz Fitelberg (Thomas 2001). This position gave her the chance to hear much of her own music. During World War II, Grażyna Bacewicz lived in Warsaw, though she fled with her family to Lublin at the time of the Warsaw uprising.[citation needed] She continued to compose, and gave underground secret concerts (premiering her Suite for Two Violins) (Lein 2008).

Bacewicz also dedicated time to family life. She was married in 1936, and gave birth to a daughter, pl (Alina Biernacka), a recognized painter. After the war, she took up the position of professor at the State Conservatoire of Music in Łódź. At this time she was shifting her musical activity towards composition, drawn by her many awards and commissions. Composition finally became her only occupation from 1954, the year in which she suffered serious injuries in a car accident (Lein 2008). She died in Warsaw.

Many of her compositions feature the violin. Among them are seven violin concertos, five sonatas for violin with piano, three for violin solo (including an early, unnumbered one from 1929), a Quartet for four violins, seven string quartets, and two piano quintets. Her orchestral works include four numbered symphonies (1945, 1951, 1952, and 1953), a Symphony for Strings (1946), and two early symphonies, now lost.

Music for voice and piano

Music for voice with orchestra

In addition, Bacewicz received awards for lifetime achievement. These included the Order of the Banner of Work Class II (1949) and class I (1959), Order of Polonia Restituta Cavalier (1953) and Commander's Cross (1955), and the 10th Anniversary Medal of the Polish People's Republic (1955).

On the centenary of her birth, Polish Post issued a stamp, with a portrait of the artist.