From Infogalactic: the planetary knowledge core
Jump to: navigation, search
For other uses, see Graduation (disambiguation). 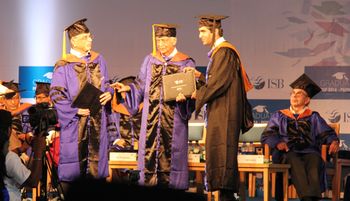 Student receiving academic degree from Azim Premji during a Graduation ceremony. Adi Godrej in the background. Recipient and donors in "convocation dress". 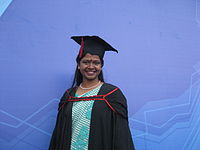 Academic procession during the University of Canterbury graduation ceremony

Line of young people at a commencement ceremony

Graduation getting a diploma or academic degree or the ceremony that is sometimes associated, where students become graduates. Before the graduation, candidates are referred to as graduands. The date of graduation is often called graduation day. The graduation ceremony itself is also called commencement, convocation or invocation. In the United States and Canada, the term is additionally increasingly being used to refer to the advancement from a primary or secondary school level. When ceremonies are associated, they usually include a procession of the academic staff and candidates and a valediction. At the college and university level the faculty will usually wear academic dress at the formal ceremonies, as will the trustees and degree candidates.

"Graduation" at the college and university level occurs when the presiding officer confers degrees upon candidates, either individually or en masse, even if graduates physically receive their diploma later at a smaller college or departmental ceremony. After degree completion, graduates can be referred to by their graduating year.

The procedures and traditions surrounding academic graduation ceremonies differ around the world. Whereas in most countries a graduation usually only occurs at university level, in the United States graduations often occur at high schools where no higher education qualifications are conferred upon the graduates. In a graduation ceremony the students dress up in special graduation caps and clothing that are made just for this purpose.

Graduation traditions are varied across universities observing different cultures. Most universities across Sweden are research-oriented and may present its students with bachelor's, master's, and doctor's degrees covering all academic streams. Universities across the country are based through the Higher Education Ordinance. A large number of candidates continue their education onto secondary and upper secondary education. Most of the national programs provide Swedish, English, Math and Science among majors.

In Zimbabwe, graduation ceremonies are often associated with the guest of honor who most of is the ceremonial head of the institution. At state universities the President of Zimbabwe officiates as chancellor and guest of honor. Every graduate of a state university in Zimbabwe can claim to have shaken the Presidents hand, which is a really great experience for most after years of hard work. The person most associated with graduation at those institutions is President Robert Gabriel Mugabe. At other State Institutions of higher learning the vice Presidents or any other Senior Government officials may preside.[2]

Origin and tradition for caps 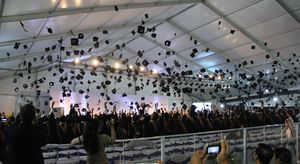 The tradition of wearing graduation hats in Sweden has been in place since the mid 18th century. The cap is typically a white sailor hat with a black or dark blue band around it, a crown motif and a black peak at the front.

The graduation hat tradition was initially brought into practice by students at Uppsala University. The headgear then became popular across several other European nations as well.[3]