The Grand Duchy of Finland (Finnish: Suomen suuriruhtinaskunta, Swedish: Storfurstendömet Finland, Latin: Magnus Ducatus Finlandiæ, Russian: Великое княжество Финляндское, Velikoye knyazhestvo Finlyandskoye; for the English translation; see also Grand Duke and Grand Prince) was the predecessor state of modern Finland. It existed between 1809 and 1917 as an autonomous part of the Russian Empire and was ruled by the Russian Emperor as Grand Duke.

An extended Southwest Finland was made a titular grand duchy in 1581, when King John III of Sweden, who as a prince had been the Duke of Finland (1556–1561/63), extended the list of subsidiary titles of the Kings of Sweden considerably. The new title Grand Duke of Finland did not result in any Finnish autonomy as Finland was an integrated part of the Kingdom of Sweden with full parliamentary representation for its counties. During the next two centuries, the title was used by some of John's successors on the throne, but not all. Usually it was just a subsidiary title of the king, used only on very formal occasions. However, in 1802 as an indication of resolve to keep Finland within Sweden in the face of increased Russian pressure, King Gustav IV Adolf gave the title to his new-born son, Prince Carl Gustaf, who died three years later.

During the Finnish War between Sweden and Russia, the four Estates of occupied Finland were assembled at the Diet of Porvoo on 29 March 1809 to pledge allegiance to Alexander I of Russia who in return guaranteed that the laws and liberties as well as religion would be left unchanged. Following the Swedish defeat in the war and the signing of the Treaty of Fredrikshamn on 17 September 1809, Finland became a true autonomous grand duchy within the autocratic Russian Empire although the usual balance of power between monarch and diet resting on taxation was not in place since the Emperor could rely on the rest of his vast Empire. The title "Grand Duke of Finland" was added to the long list of titles of the Russian Tsar. After his return to Finland in 1812, the Finnish-born Gustaf Mauritz Armfelt became councillor to the Russian emperor. Armfelt was instrumental in securing the Grand Duchy as an entity with relatively greater autonomy within the Russian realm, and for restoring the so-called Old Finland that had been lost to Russia in the Treaty of Nystad in 1721.

The history of the Grand Duchy can briefly be characterised as:[citation needed]

The constitutional status of Finland was not codified in Russian law before the February Manifesto of 1899, by which time Finns and Russians had developed quite different ideas about the status of Finland. The autonomy of Finland was at first encouraged by the Russians in part due to the relatively developed governmental structures in Finland (as compared to the emperor-centered Russia of early 19th century) and in part as a deliberate policy of goodwill to win over the minds of the Finnish people. The autonomous status led Finns to develop their own ideas of nationalism and constitutional monarchy, which they could to a large extent implement in practice with the assent of the Tsar. However, while each tsar at the time of his coronation did agree to uphold the special status of the local laws in Finland, there is no evidence that they understood their position as one of a constitutional monarch, despite the growing prevalence of such an interpretation in Finland in the latter part of the 19th century. As governmental organizations developed in Russia, and unity of the empire became one of the leading tenets of Russian politics, clashes between the Russian and Finnish governmental organizations grew frequent and led to the attempted russification.

Finland nevertheless enjoyed a high degree of autonomy, until its independence in 1917. In 1917, after the February Revolution in Russia, Finland's government worked towards securing and perhaps even increasing Finland's autonomy in domestic matters. On 6 December 1917, shortly after the October Revolution in Russia, Finland declared its independence. After the Finnish Civil War, which led to a temporary majority of monarchists in the parliament, Prince Frederick Charles of Hesse was elected the new monarch as king instead of grand duke, marking the new status of the nation, but he never reigned, as a republic was proclaimed after Germany's defeat in the First World War.

The Russian emperor ruled as the Grand Duke of Finland and was represented in Finland by the Governor-General of Finland. The Senate of Finland was the highest governing body of the Grand Principality, and was composed of native Finns. In St. Petersburg Finnish matters were represented by the Minister–Secretary of State for Finland. From 1863 onwards the Diet of Finland convened regularly. In 1906, the Diet, with its hereditary rather than universally elected representation, was dissolved and the modern Parliament of Finland was established. Finland was one of the first regions in the world to implement universal suffrage and eligibility, including for women and for landless people.

The Grand Duchy of Finland lay approximately within the same borders that had existed before the Moscow Peace Treaty of 1940. The main difference was Petsamo, which was ceded to Finland in the Treaty of Tartu in 1920.

Historical population of the Grand Duchy of Finland

Main article: Governorates of the Grand Duchy of Finland 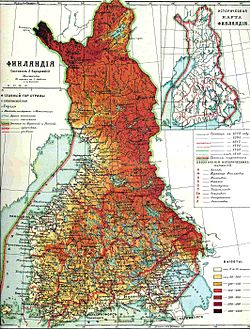 The Provinces of Finland, about 1900.

The administrative division of the Grand Duchy followed the Russian imperial model with provinces (Russian: губерния governorate, Swedish: län, Finnish: lääni) headed by governors. However few changes were made and as the language of the administrators was still Swedish the old terminology from during the Swedish time continued in local use. The Viipuri Province was not initially part of the Grand Duchy, but in 1812 it was transferred by Tsar Alexander I from Russia proper to Finland. After 1831 there were eight provinces in the Grand Duchy until the end and that continued in the independent Finland:

Main articles: Flag of Finland and Coat of arms of Finland

The arms were originally designed for the sarcophagus of Gustav I Vasa around 1580, depicting a gold heraldic lion on a red shield holding a raised sword in its right hand and trampling a curved sabre.

In the 1860s talk about a Finnish flag started in the fennoman movement. In 1863 numerous proposals were presented for a national flag. [1] The two main proposals were flags based on red/yellow and blue/white. The flag proposals never had a chance to be presented to the Diet, so none of them ever became an official flag. However people used different designs with these colors for flags of their own choosing. Since 1821, merchant ships were permitted to fly the Russian flag (horizontal white-blue-red tricolor) without a special permit.