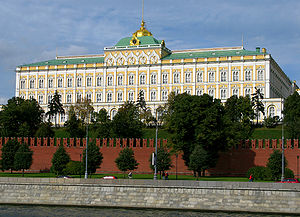 View from across the Moskva River

Lua error in Module:Coordinates at line 668: callParserFunction: function "#coordinates" was not found. The Grand Kremlin Palace (Большой Кремлёвский дворец; Bolshoy Kremlyovskiy Dvorets), also translated Great Kremlin Palace, was built from 1837 to 1849 in Moscow, Russia on the site of the estate of the Grand Princes, which had been established in the 14th century on Borovitsky Hill. Designed by a team of architects under the management of Konstantin Thon, it was intended to emphasise the greatness of Russian autocracy. Konstantin Thon was also the architect of the Kremlin Armoury and the Cathedral of Christ the Savior.

The Grand Kremlin Palace was formerly the tsar's Moscow residence. Its construction involved the demolition of the previous Baroque palace on the site, designed by Rastrelli, and the Church of St. John the Baptist, constructed to a design by Aloisio the New in place of the first church ever built in Moscow.

Thon's palace is 125 metres long, 47 metres high, and has a total area of about 25,000 square metres. It includes the earlier Terem Palace, nine churches from the 14th, 16th, and 17th centuries, the Holy Vestibule, and over 700 rooms. The buildings of the Palace form a rectangle with an inner courtyard. The building appears to be three stories, but is actually two. The upper floor has two sets of windows. The west building of the Palace held state reception halls and the imperial family's private chambers (picture).

Its five reception halls (Georgievsky, Vladimirsky, Aleksandrovsky, Andreyevsky, and Ekaterininsky) are named for orders of the Russian Empire: the Orders of St. George, Vladimir, Alexander, Andrew, and Catherine. Georgievsky Hall (picture) is used today for state and diplomatic receptions and official ceremonies. International treaties are signed at the Vladimirsky Hall (picture). Such as the instance on June 1, 1988, U.S. President Ronald Reagan and Soviet General Secretary Mikhail Gorbachev signed the INF Treaty ratification. It also leads to the Palace of Facets, the Tsarina's Golden Chamber, Terem Palace, the Winter Palace, and the Palace of Congresses. Aleksandrovsky Hall (picture) and Andreyevsky Hall (picture) were combined in Soviet times to be used for meetings and conferences of the Supreme Soviet of the USSR; they were lavishly restored in accordance with Thon's designs in the 1990s. Currently it is the official residence of the President of the Russian Federation though it is rarely used for this purpose.