From Infogalactic: the planetary knowledge core
Jump to: navigation, search
For the operetta by Gilbert and Sullivan, see The Grand Duke. For the Grand Duke butterfly, see Bassarona iva.

The monarchic title Grand Duke is or was used in some independent nations or states in Europe, particularly:

Grand Duke ranks in order of precedence below Emperor and King, and above that of sovereign Prince and sovereign Duke.

In some eastern European languages (e.g. Russian, Lithuanian) the title "Grand Prince" is used instead of "Grand Duke" (e.g. the Grand Duchy of Luxembourg is called by the Russians "Grand Principality of Luxembourg"), whereas in most western European languages (English, French, Spanish, Italian etc.) the opposite is true. As a result, the brothers of the former Tsar of Russia, who were bearers of the title Velikiy Kniaz (Grand Prince), are usually called "Grand Duke" in western literature, although they were not sovereign monarchs. In medieval Bosnia there existed the similar but equally non-sovereign title "Veliki Vojvoda", reserved for the sovereign's highest-ranking military commanders.

The term "Grand Duke" as a monarch reigning over an independent state was a later invention (in Western Europe at first in 1569 for the ruler of Tuscany) to denote either a particularly mighty Duke or a monarchy playing an important political, military and/or economic role, but not large enough to be a Kingdom. It arose because the title of Duke had gradually lost status and precedence during the Middle Ages by having been granted to rulers of relatively small fiefs (feudal territories), instead of the big tribal regions or even nation territories to which the title was once attached.

One of the first examples occurred when Count Gonçalo I Mendes of Portucale (in northwest Portugal and considered as that country's original nucleus) took, in 987, the personal title of Magnus Dux Portucalensium (Grand Duke of the Portuguese) and rebelled against his feudal lord, King Bermudo II of León. He was defeated by the royal armies but nevertheless obtained a remarkable autonomy as a Magnus Dux (Grand Duke), leading ultimately to Portuguese independence from the Spanish Kingdom of Castille-León.

Another example was the line of self-proclaimed Grand Dukes (legally Dukes)[citation needed] of Burgundy in the 15th century, when they ruled most of present-day north-eastern France as well as almost the entire Low Countries. They tried -ultimately without success- to create from these territories under their control a new unified country between the Kingdom of France in the west and the Holy Roman Empire (mainly present-day Germany) in the east. Philip III, Duke of Burgundy (reigned 1419–67) assumed the subsidiary, legally void style and title of Grand Duke of the West in 1435, having previously brought the Duchies of Brabant and Limburg as well as the counties of Holland, Zeeland, Friesland, Hainaut and Namur into his possession. His son and successor Charles the Bold (reigned 1467–77) continued to use the same style and title.

The title magnus dux or Grand Duke (Didysis Kunigas, Didysis Kunigaikštis in Lithuanian) has been used by the rulers of Lithuania, who after Jagiello also became Kings of Poland. From 1573, both the Latin version and its Polish equivalent wielki ksiaze (literally "Grand Prince"), the monarchic title of the rulers of Lithuania as well as of (western) Russia, Prussia, Mazovia, Samogithia, Kiev, Volhynia, Podolia, Podlachia, Livonia, Smolensk, Severia and Chernigov (including hollow claims nurtured by ambition), were used as part of their full official monarchic titles by the Kings (Polish: Krol) of Poland during the Polish–Lithuanian Commonwealth.

The first monarchs ever officially titled Grand Duke were the Medici sovereigns of Tuscany, starting from the late 16th century. This official title was granted by Pope Pius V in 1569, but arguably illegally because the territory was under the vassalage of the Holy Roman Empire.

Napoleon I awarded that title extensively: during his era, several of his allies (and de facto vassals) were allowed to assume the title of Grand Duke, usually at the same time as their inherited fiefs (or fiefs granted by Napoleon) were enlarged by annexed territories previously belonging to enemies defeated on the battlefield. After Napoleon's downfall, the victorious powers who met at the Congress of Vienna, which dealt with the political aftermath of the Napoleonic Wars, agreed to abolish the Grand Duchies created by Bonaparte and to create a group of monarchies of intermediate importance with that title. Thus the 19th century saw a new group of monarchs titled Grand Duke in central Europe, especially in present-day Germany. A list of these is available in the article Grand Duchy.

In the same century, the purely ceremonial version of the title "Grand Duke" in Russia (in fact the western translation of the Russian title "Grand Prince" granted to the siblings of the Tsar) expanded massively because of the large number of progeny of the ruling House of Romanov during those decades.

In the German and Dutch languages, which have separate words for a prince as the issue (child) of a monarch (respectively Prinz, Prins) and for a sovereign prince (Fürst, Vorst), there is also a clear linguistic difference between a sovereign Grand Duke reigning over a state of central and western Europe (Großherzog, Groothertog) and a non-sovereign, purely ceremonial Grand Duke of either the Russian Imperial family or other non-sovereign territories which are de facto dependencies of a major power (Großfürst, Grootvorst).

In 1582, King John III of Sweden added "Grand Duke of Finland" to the subsidiary titles of the Swedish kings, but without any political consequences, as Finland was already a part of the Swedish "Empire".

After the Russian conquests, the title continued to be used by the Russian Emperors in their role as rulers of both (de facto non-sovereign) Lithuania (1793–1918) and the (equally non-sovereign) autonomous Finland (1809–1917). The Holy Roman Empire under the House of Habsburg instituted a similar non-sovereign Großfürstentum Siebenbürgen (Grand Principality of Transylvania) in 1765.

Grand Princes (or sometimes Great Princes) were medieval monarchs who usually ruled over several tribes and/or were feudal overlords of other princes. At the time, the title was usually translated as "King", sometimes also as "Minor King" or "Little King" (in German "Kleinkönig"). However, Grand Princes did not have the same monarchic precedence as later Western European Kings, and thus they were considered lower in rank, particularly in later literature.

Grand Princes reigned in Central and Eastern Europe, notably among Slavs and Lithuanians.

The title "Grand Prince" is Velikiy Knjaz (Великий князь) in Russian. The Slavic word knjaz and the Lithuanian kunigas (today translated as Prince) are cognates of the word King in its original meaning of "Ruler". Thus, the literal meaning of Veliki Knjaz and Didysis Kunigas was more like "Great Ruler" than "Grand Duke".

With the growing importance and size of their countries, those monarchs claimed a higher title, such as King or Tsar (also spelled "Czar" in English) which was derived from "Caesar" (= Emperor) and based on the claim to be the legitimate successors of the Byzantine-East Roman Emperors. Grand Prince Ivan IV of Muscovy was the last monarch to reign without claiming any higher title, until he finally assumed the style Tsar of Russia in 1547.

The rulers of the Turkish vassal state of Transylvania (in German: Siebenbürgen) used the title of Grand Prince; this title was later assumed by the Habsburgs after their conquest of Hungary. The Polish Kings of the Vasa dynasty from Sweden also used the grand-princely title for their non-Polish territory.

In the late Middle Ages, the title "Grand Prince" became increasingly a purely ceremonial courtesy title for close relatives of ruling monarchs, such as the Tsar of Russia, who granted his brothers the title Grand Duke of Russia (veliki knjaz).

For more details on this topic, see megas doux.

Under the latter, exclusively Byzantine theme system, the commander of a theme was often styled a doux instead of the earlier strategos from the 10th century on. The title of "Grand Duke" (megas doux) was created by Alexios I Komnenos and was conferred upon the commanding admiral of the Byzantine navy. As such, it was an actual office rather than a court rank (although it also became a grade in the court order of precedence under the Palaiologan emperors), and was always held by one individual. 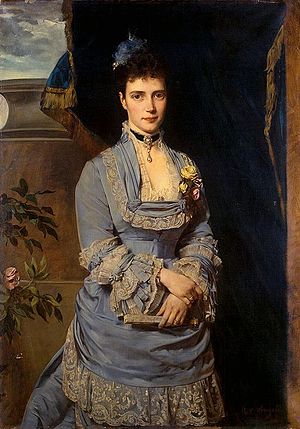 "Grand Duke" is the traditional translation of the title Velikiy Kniaz (Великий Князь), which from the 11th century was at first the title of the leading Prince of Kievan Rus', then of several princes of the Rus'. From 1328 the Velikii Kniaz of Muscovy appeared as the grand duke for "all of Russia" until Ivan IV of Russia in 1547 was crowned as Tsar. Thereafter the title was given to sons and grandsons (through male lines) of the Tsars and Emperors of Russia. The daughters and paternal granddaughters of Russian emperors, as well as the consorts of Russian Grand Dukes, were generally called "Grand Duchesses" in English.

Another translation of the Russian title would be Grand Prince. While this term is a more precise translation, it is neither standard nor widely used in English. In German, however, a Russian Grand Duke was known as a Großfürst, and in Latin as Magnus Princeps.

From 1809 to 1917 the Emperor of Russia was also the Grand Duke of Finland, which he held as an (de facto non-sovereign so-called) autonomous state. Before the Russian conquest Finland had been held by the Swedish Kings, first as a royal duchy, since 1581 with the King assuming the secondary title Grand Prince of Finland (Finnish: Suomen suuriruhtinas, Swedish: Storfurste av Finland), also often translated as Grand Duke of Finland.

Throughout the history of Lithuania from the middle 1200s to the late 1700s, most of its leaders were referred to as Grand Dukes of the Grand Duchy of Lithuania, even when they jointly held the title King of Poland and other titles.

Styles and forms of address

Most often, a sovereign Grand Duke was styled as "Royal Highness" (HRH), as he was considered part of the reigning nobility (German: Hochadel). A Hereditary Grand Duke was also styled as "Royal Highness", while junior members of the Grand Ducal family generally bore the lower title of prince/princess with the style of "Grand Ducal Highness" (HGDH). A famous example is Empress Alexandra Feodorovna of Russia, who was known as "Her Grand Ducal Highness Princess Alix of Hesse and by Rhine" (Ihre Großherzogliche Hoheit Prinzessin Alix von Hessen und bei Rhein) before her marriage to Tsar Nicholas II. However, in other Grand Duchies (i.e., Oldenburg), junior members of the family bore the title of duke/duchess, with the style of "Highness" (HH).

The Grand Ducal Family of Luxembourg styles all its members as "Royal Highness" since 1919, due to their being also cadet members of the Royal and Ducal House of Bourbon-Parma as male-line descendants of Prince Felix of Bourbon-Parma.

The Habsburg Grand Dukes of Tuscany, being members of the Imperial family of Austria, were styled as "Imperial and Royal Highness" (HI&RH).

Historically, Grand Dukes and Grand Duchesses from Russia were styled as "Imperial Highness" (HIH), being members of the Russian Imperial Family.