Grant County is a county located on the northern border of the U.S. state of Oklahoma. As of the 2010 census, the population was 4,527.[1] Its county seat is Medford.[2] Originally designated as part of the Cherokee Outlet, it was named County L in Oklahoma Territory at the time of its opening to non-Indian settlement. A county election renamed it for U.S. President Ulysses S. Grant.

Grant County was part of the Cherokee Nation's Cherokee Outlet until it was opened to non-Indian settlers in response to public demand on September 16, 1893. Settlers named the county after President Ulysses S. Grant[3] in a general election held November 6, 1894. Congress originally designated this area as County L in Oklahoma Territory, with the county seat at Pond Creek. Medford became the county seat through an election held on May 27, 1908.[4]

The railroads gave the county access to markets in the northern and eastern U.S., helping turn the county into a major agriculture and cattle producer. At statehood, the principal crops were wheat, corn, oats, alfalfa, and forage sorghum. The county also had more than fourteen thousand each of hogs and cattle as well as almost thirteen thousand horses.[4]

Florence was the site of a post office in Grant Co. that existed prior to 1908 but ceased to exist about 1920, after the post office closed, per information acquired in researching an ancestor, Isaac Arnold who was post-master in Florance from August 1908 to 1920.[citation needed] 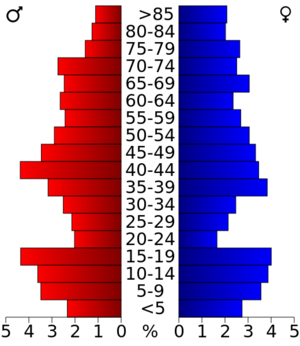 Age pyramid for Grant County, Oklahoma, based on census 2000 data.

The county economy has largely been based on agriculture since before statehood. At statehood the principal crops included wheat, corn, oats, alfalfa, and forage sorghum with estimated value of $3.5 million. Farmers and ranchers had more than fourteen thousand each of hogs and cattle as well as almost thirteen thousand horses.[4]

Oil and gas were discovered In the early 1920s in the eastern part of the county near the Blackwell Field. On April 24, 1921, the first oil well in Grant County, was drilled near Deer Creek.[4]

Wakita was featured in the 1996 blockbuster film Twister in which the town was destroyed by an F4 tornado that was part of a storm system later spawning an F5 tornado. False fronts were built onto the existing store fronts for pre-tornado shots and then were removed and replaced with rubble in the streets for post-tornado shots.

The following sites in Grant County are listed on the National Register of Historic Places: