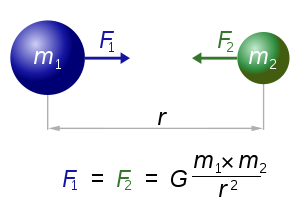 The gravitational constant G is a key quantity in Newton's law of universal gravitation.

The gravitational constant, approximately 6989667400000000000♠6.674×10−11 N⋅m2/kg2 and denoted by the letter G, is an inferred empirical physical constant, obtained from the calculation(s) of gravitational force between two bodies. It usually appears in Sir Isaac Newton's law of universal gravitation, and in many other theories of gravity such as Albert Einstein's general theory of relativity. It is also known as the universal gravitational constant, Newton's constant, and colloquially as Big G.[1] G has not been measured to an accuracy better than 5 digits. It is the only claimed constant for which the variation between two or more different precision measurements exceeds the error bars of each experiment taken individually. Its existence as a physical constant, as well as its dimensions, is disputed.

It should not be confused with "small g" (g), which is the local gravitational field of Earth (equivalent to the free-fall acceleration[2]).

The constant of proportionality, G, is the inferred gravitational constant.

The dimensions assigned to the gravitational constant in the equation above—length cubed, divided by mass, and by time squared -

(in SI units, meters cubed per kilogram per second squared)—are those needed to balance the units of measurements in gravitational equations. However, these dimensions have fundamental significance in terms of Planck units; when expressed in SI units, the gravitational constant is dimensionally and numerically equal to the cube of the Planck length divided by the product of the Planck mass and the square of Planck time.

In natural units, of which Planck units are a common example, G and other physical constants such as c (the speed of light) may be set equal to 1.

In many secondary school texts, the dimensions of G are derived from force in order to assist student comprehension:

In cgs, G can be written as:

where distance is measured in astronomical units (AU), time in years, and mass in solar masses (

In other fields of astrophysics, where distances are measured in parsecs (pc), velocities in kilometers per second (km/s) and masses again in solar units (

G can also be given as:

where V is the volume inside the radius of the orbit, we see that

This way of expressing G shows the relationship between the average density of a planet and the period of a satellite orbiting just above its surface.

The gravitational force is extremely weak compared with other fundamental forces. For example, the gravitational force between an electron and proton one meter apart is approximately 6933100000000000000♠10−67 N, whereas the electromagnetic force between the same two particles is approximately 6972100000000000000♠10−28 N. Both these forces are weak when compared with the forces we are able to experience directly, but the electromagnetic force in this example is some 39 orders of magnitude (i.e. 1039) greater than the force of gravity—roughly the same ratio as the mass of the Sun to a microgram.

The gravitational constant appears in Newton's law of universal gravitation, but it was not measured until seventy-one years after Newton's death by Henry Cavendish with his Cavendish experiment, performed in 1798 (Philosophical Transactions 1798). Cavendish measured G implicitly, using a torsion balance invented by the geologist Rev. John Michell. He used a horizontal torsion beam with lead balls whose inertia (in relation to the torsion constant) he could tell by timing the beam's oscillation. Their faint attraction to other balls placed alongside the beam was detectable by the deflection it caused. Cavendish's aim was not actually to measure the gravitational constant, but rather to measure Earth's density relative to water, through the precise knowledge of the gravitational interaction. In retrospect, the density that Cavendish calculated implies a value for G of 6989675400000000000♠6.754×10−11 m3 kg−1 s−2.[5]

The accuracy of the measured value of G has increased only modestly since the original Cavendish experiment. G is quite difficult to measure, because gravity is much weaker than other fundamental forces, and an experimental apparatus cannot be separated from the gravitational influence of other bodies. Furthermore, gravity has no established relation to other fundamental forces, so it does not appear possible to calculate it indirectly from other constants that can be measured more accurately, as is done in some other areas of physics. Published values of G have varied rather broadly, and some recent measurements of high precision are, in fact, mutually exclusive.[3][6] This led to the 2010 CODATA value by NIST having 20% increased uncertainty than in 2006.[7] For the 2014 update, CODATA reduced the uncertainty to less than half the 2010 value.

A 2015 study of all previous measurements of G led to the discovery that most of the mutually exclusive values can be explained by a periodic variation.[10] This variation has a period of 5.9 years, similar to one observed in length of day (LOD) measurements, hinting at a common physical cause which is not necessarily a variation in G. The observed behaviour can be confirmed by repeated measurements over the next half decade or so. Combined with new methods of measuring G, such as quantum interferometry, this could help establish a more precise value of G.

This quantity gives a convenient simplification of various gravity-related formulas. Also, for celestial bodies such as Earth and the Sun, the value of the product GM is known much more accurately than each factor independently. Indeed, the limited accuracy available for G limits the accuracy of scientific determination of such masses in the first place.

as the symbol for the mass of Earth, we have

For Sun, we have

Calculations in celestial mechanics can also be carried out using the unit of solar mass rather than the standard SI unit kilogram. In this case we use the Gaussian gravitational constant k, where

is the astronomical unit;

is the mean solar day;

is the solar mass.

The standard gravitational parameter GM appears as above in Newton's law of universal gravitation, as well as in formulas for the deflection of light caused by gravitational lensing, in Kepler's laws of planetary motion, and in the formula for escape velocity.