Lensing by a black hole. Animated simulation of gravitational lensing caused by a Schwarzschild black hole going past a background galaxy.

A gravitational singularity or spacetime singularity is a location where the quantities that are used to measure the gravitational field of a celestial body become infinite in a way that does not depend on the coordinate system. These quantities are the scalar invariant curvatures of spacetime, which includes a measure of the density of matter. The laws of normal spacetime could not exist within a singularity.[1][2]

For the purposes of proving the Penrose–Hawking singularity theorems, a spacetime with a singularity is defined to be one that contains geodesics that cannot be extended in a smooth manner.[3] The end of such a geodesic is considered to be the singularity. This is a different definition, useful for proving theorems.

Many theories in physics have mathematical singularities of one kind or another. Equations for these physical theories predict that the ball of mass of some quantity becomes infinite or increases without limit. This is generally a sign for a missing piece in the theory, as in the ultraviolet catastrophe, renormalization, and instability of a hydrogen atom predicted by the Larmor formula.

Some theories, such as the theory of loop quantum gravity suggest that singularities may not exist. The idea is that due to quantum gravity effects, there is a minimum distance beyond which the force of gravity no longer continues to increase as the distance between the masses becomes shorter.

The Einstein-Cartan-Sciama-Kibble theory of gravity naturally averts the gravitational singularity at the Big Bang.[10] This theory extends general relativity to matter with intrinsic angular momentum (spin) by removing a constraint of the symmetry of the affine connection and regarding its antisymmetric part, the torsion tensor, as a variable in varying the action. The minimal coupling between torsion and Dirac spinors generates a spin–spin interaction in fermionic matter, which becomes dominant at extremely high densities and prevents the scale factor of the Universe from reaching zero. The Big Bang is replaced by a cusp-like Big Bounce at which the matter has an enormous but finite density and before which the Universe was contracting.[citation needed] 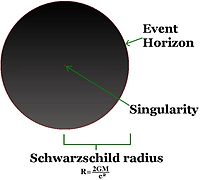 Solutions to the equations of general relativity or another theory of gravity (such as supergravity) often result in encountering points where the metric blows up to infinity. However, many of these points are completely regular, and the infinities are merely a result of using an inappropriate coordinate system at this point. In order to test whether there is a singularity at a certain point, one must check whether at this point diffeomorphism invariant quantities (i.e. scalars) become infinite. Such quantities are the same in every coordinate system, so these infinities will not "go away" by a change of coordinates.

An example is the Schwarzschild solution that describes a non-rotating, uncharged black hole. In coordinate systems convenient for working in regions far away from the black hole, a part of the metric becomes infinite at the event horizon. However, spacetime at the event horizon is regular. The regularity becomes evident when changing to another coordinate system (such as the Kruskal coordinates), where the metric is perfectly smooth. On the other hand, in the center of the black hole, where the metric becomes infinite as well, the solutions suggest a singularity exists. The existence of the singularity can be verified by noting that the Kretschmann scalar, being the square of the Riemann tensor i.e.

More generally, a spacetime is considered singular if it is geodesically incomplete, meaning that there are freely-falling particles whose motion cannot be determined beyond a finite time, being after the point of reaching the singularity. For example, any observer inside the event horizon of a non-rotating black hole would fall into its center within a finite period of time. The classical version of the Big Bang cosmological model of the universe contains a causal singularity at the start of time (t=0), where all time-like geodesics have no extensions into the past. Extrapolating backward to this hypothetical time 0 results in a universe with all spatial dimensions of size zero, infinite density, infinite temperature, and infinite space-time curvature.

A conical singularity occurs when there is a point where the limit of every diffeomorphism invariant quantity is finite, in which case spacetime is not smooth at the point of the limit itself. Thus, spacetime looks like a cone around this point, where the singularity is located at the tip of the cone. The metric can be finite everywhere if a suitable coordinate system is used.

An example of such a conical singularity is a cosmic string.[12]

Until the early 1990s, it was widely believed that general relativity hides every singularity behind an event horizon, making naked singularities impossible. This is referred to as the cosmic censorship hypothesis. However, in 1991, physicists Stuart Shapiro and Saul Teukolsky performed computer simulations of a rotating plane of dust that indicated that general relativity might allow for "naked" singularities. What these objects would actually look like in such a model is unknown. Nor is it known whether singularities would still arise if the simplifying assumptions used to make the simulation were removed.[13][14][15]

Before Stephen Hawking came up with the concept of Hawking radiation, the question of black holes having entropy was avoided. However, this concept demonstrates that black holes can radiate energy, which conserves entropy and solves the incompatibility problems with the second law of thermodynamics. Entropy, however, implies heat and therefore temperature. The loss of energy also suggests that black holes do not last forever, but rather "evaporate" slowly. Small black holes tend to be hotter whereas larger ones tend to be colder. All known black hole candidates are so large that their temperature is far below that of the cosmic background radiation, so they are all gaining energy. They will not begin to lose energy until a cosmological redshift of more than one million is reached, rather than the thousand or so since the background radiation formed.