The Great Australian Bight is a large oceanic bight, or open bay, off the central and western portions of the southern coastline of mainland Australia. 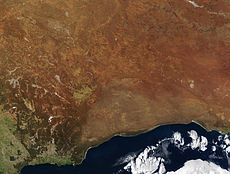 The IHO defines the Great Australian Bight as having the following limits:[3]

On the North. The south coast of the Australian mainland.

On the East. A line from Cape Otway, Victoria to King Island and thence to Cape Grim, the northwest extreme of Tasmania.

The AHS defines the bight with a smaller area, from Cape Pasley, Western Australia, to Cape Carnot, South Australia - a distance of 1,160 kilometres (720 mi).[4][5]

Much of the bight lies due south of the expansive Nullarbor Plain, which straddles South Australia and Western Australia. The Eyre Highway passes close to the cliffs of the bight between the Head of the Bight and Eucla. 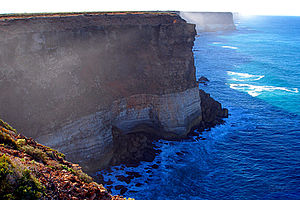 The Great Australian Bight was first encountered by European explorers in 1627 when a Dutch navigator François Thijssen sailed along its western margins. The coast was later first accurately charted by the English navigator Matthew Flinders in 1802, during his circumnavigation of the Australian continent. A later land-based survey was accomplished by the English explorer Edward John Eyre.

The coastline of the Great Australian Bight is characterised by cliff faces (up to 60 metres (200 ft) high), surfing beaches and rock platforms, ideal for whale-watching.[7] This is a popular activity during the southern hemisphere winter, when increasing numbers of southern right whales migrate to the region from their summer feeding grounds in the Antarctic. The whales come to the Bight region, especially to the Head of Bight, to calve and breed, and do not feed until they return to the Antarctic.[8] Their numbers were severely depleted by whaling, particularly during the 19th Century, but have since recovered to some extent.[9]

The Nullarbor Plain, which borders much of the length of the Bight's coastline, is a former seabed, uplifted during the Miocene. Consisting of limestone, it is very flat, and has an arid or semi-arid climate with very little rainfall, and high summer temperatures and high evaporation rates. It has no surface drainage, but has a karst drainage system through cave formation in the underlying limestone. North of the Nullarbor lies the Great Victoria Desert, which has an internal drainage system terminating in numerous small salt lakes.

The lack of surface runoff and terrestrial nutrients results in the relatively shallow waters of the Great Australian Bight being generally low in nutrients, and therefore oligotrophic, compared with many other continental shelves which support major fisheries. Seasonal upwelling of deep ocean water along the coast of the Eyre Peninsula in the eastern part of the Bight brings nutrients to the surface waters, with the resulting fertility creating an important marine hotspot.

The waters of the Great Australian Bight are highly biodiverse, particularly in zooplankton, due to a particular series of ocean currents. A literature review undertaken by SARDI (South Australian Research and Development Institute) on the Benthic Protection Zone of the Great Australian Bight Marine Park in 2003 states: "Upwelling events during summer and autumn produce cool patches of surface water along the coast of the southern Eyre Peninsula. These patches contain elevated nutrient concentrations and support enhanced levels of primary productivity. High densities of zooplankton to the northwest of the patches indicate that the prevailing southeasterly winds transport the products of this enhanced biological production into the central GAB. These plankton communities support the highest densities of small planktivorous fishes, including sardine and anchovy, in Australian waters. Juvenile southern bluefin tuna (SBT) migrate into the GAB annually to feed on these rich pelagic resources."[10] As the nutrients are swept up from the deep water ocean floor and pushed in towards the coast, the food chain is injected with a massive influx of the bottom rung.

There is not enough known about the full scope of species that dwell in or migrate to the Great Australian Bight, so more studies are required. "The Interim Marine and Coastal Regionalisation of Australia (IMCRA) classification suggests that high biodiversity in the GAB may be explained by the presence of temperate species with eastern and western affinities, as well as “tropical stragglers” from northern regions. However, patterns of diversity vary between taxa. Mangroves are poorly represented due to the lack of estuaries. Seagrasses are confined mainly to sheltered bays and the lees of reefs and islands due to the frequent disturbance of inshore habitats by large swells. In contrast, the macroalgal assemblage of the GAB is one of the world’s most diverse and includes >1200 species. Over 90% of species in most invertebrate groups are endemic to southern Australia, but the proportion that is confined to the GAB is unknown."[10]

There is still much research needed to fully understand the complex ecosystems of the Great Australian Bight and how any resource extraction or other human activity may affect them. The Literature review also states: "Approximately 370 of the 600 fish species that occur in southern Australia have been recorded in SA. Several species, including the coastal stingaree (Urolophus orarius) and 10 crested threefin (Norfolkia cristata), are restricted to South Australia and occur in the GAB. The patterns of distribution and abundance of fishes in the GAB are poorly understood." [10]

There are some clear findings from the review, "The GAB provides critical habitat for two species of marine mammals that are recognised internationally as being priorities for conservation. The Southern Right Whales (Eubalaena australis), which is listed as ‘endangered’ under the Commonwealth Environment Protection and Biodiversity Conservation Act 1999, breeds at the Head of Bight during winter. The Australian sea lion (Neophoca cinerea), which is endemic to Australia and is currently listed as “near threatened”, breeds in small colonies along the cliffs of the GAB."[10] These marine mammals require this habitat to remain in existence, which has been recognised by Australian law.

One location on the bight that is specifically oriented towards the understanding of the natural history on its coastline is the Eyre Bird Observatory.

Economically, the Bight has been exploited over many years as part of the fishing, whaling and shellfish industries. Bluefin tuna have been a favoured target of fishing in the Bight.

The settlements existing along the coastline of the bight, such as Ceduna and Eucla have facilities to access the bight. Some other locations on the Eyre Highway or located on the Nullarbor do not have facilities or easy access.