From Infogalactic: the planetary knowledge core
Jump to: navigation, search
For the Mississippi Flood of 1993, see Great Flood of 1993.

The Great Mississippi Flood of 1927 was the most destructive river flood in the history of the United States,[1] with 27,000 square miles inundated up to a depth of 30 feet. To try to prevent future floods, the federal government built the world's longest system of levees and floodways.

Ninety-four percent of the more than 630,000 people affected by the flood lived in the states of Arkansas, Mississippi and Louisiana, most in the Mississippi Delta. More than 200,000 African Americans were displaced from their homes along the Lower Mississippi River and had to live for lengthy periods in relief camps. As a result of this disruption, many joined the Great Migration from the South to northern and midwestern industrial cities rather than return to rural agricultural labor. [2] This massive population movement increased from World War II until 1970.

The flood began with extremely heavy rains in the central basin of the Mississippi in the summer of 1926. By September, the Mississippi's tributaries in Kansas and Iowa were swollen to capacity. On Christmas Day of 1926,[3] the Cumberland River at Nashville, Tennessee exceeded 56 ft 2 in (17.1 m), a level that remains a record to this day, higher than the devastating 2010 floods.

Flooding overtopped the levees, causing Mounds Landing to break with more than double the water volume of Niagara Falls. The Mississippi River broke out of its levee system in 145 places and flooded 27,000 square miles (70,000 km2). This water flooded an area 50 mi (80 km) wide and more than 100 mi (160 km) long. The area was inundated up to a depth of 30 ft (9 m). The flood caused over US$400 million in damages and killed 246 people in seven states.

The flood affected Missouri, Illinois, Kansas, Tennessee, Kentucky, Arkansas, Louisiana, Mississippi, Oklahoma, and Texas. Arkansas was hardest hit, with 14% of its territory covered by floodwaters extending from the Mississippi and Arkansas deltas. By May 1927, the Mississippi River below Memphis, Tennessee, reached a width of 60 mi (97 km).[4]

On April 15, 1927, 15 inches (380 mm) of rain fell in New Orleans in 18 hours.[5] More than 4 feet (1.2 m) of water covered parts of the city. A group of influential bankers in town met to discuss how to guarantee the safety of the city, as they had already learned of the massive scale of flooding upriver.[5] A few weeks later, they arranged to set off about 30 tons of dynamite on the levee at Caernarvon, Louisiana, releasing 250,000 ft³/s (7,000 m³/s) of water. This was intended to prevent New Orleans from suffering serious damage, and it resulted in flooding much of the less densely populated St. Bernard Parish and all of Plaquemines Parish's east bank. As it turned out, the destruction of the Caernarvon levee was unnecessary; several major levee breaks well upstream of New Orleans, including one the day after the demolitions, released major amounts of flood waters, reducing the water that reached the city. The New Orleans businessmen did not compensate the losses of people in the downriver parishes.[6] 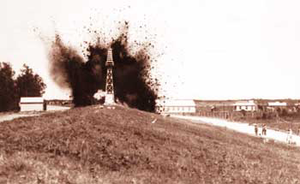 A river levee is blown up at Caernarvon in 1927

By August 1927, the flood subsided. Hundreds of thousands of people had been made homeless and displaced; properties, livestock and crops were destroyed.

In terms of population affected, in territory flooded, in property loss and crop destruction, the flood's figures were "staggering". Great loss of life was averted by relief efforts, largely by the American Red Cross through the efforts of local workers. African Americans, comprising 75% of the population in the Delta lowlands and supplying 95% of the agricultural labor force, were most affected by the flood. Historians estimate that of the 637,000 people forced to relocate by the flooding, 94% lived in three states: Arkansas, Mississippi and Louisiana; and that 69% of the 325,146 who occupied the relief camps were African American.[7] In one noted location, over 13,000 evacuees near Greenville, Mississippi, were gathered from area farms, and evacuated to the crest of the unbroken Greenville Levee. But they were stranded there for days without food or clean water. Boats were used to evacuate white women and children from Greenville.[8][9] The Greenville Levee was eight feet wide and approximately five miles long. Planters feared that if the laborers were evacuated from the region, they would not return to the Delta, resulting in a labor shortage.[9] In addition these refugees being ill-supplied, many African-American men were impressed into service as relief workers to unload supply ships sent by the Red Cross, and were never paid. The Red Cross at the time required workers to be "volunteers."

Following the Great Flood of 1927, the US Army Corps of Engineers was charged with taming the Mississippi River. Under the Flood Control Act of 1928, the world's longest system of levees was built. Floodways that diverted excessive flow from the Mississippi River were constructed.[10] While the levees prevented some flooding, scientists have found that they changed the flow of the Mississippi River, with the unintended consequence of increasing flooding in succeeding decades. Channeling of waters has reduced the absorption of seasonal rains by the floodplains, increasing the speed of the current and preventing the deposit of new soils along the way.

States also needed money to rebuild their roads and bridges. Louisiana received $1,067,336 from the federal government for rebuilding, [11] but it had to institute a state gasoline tax to create a $30,000,000 fund to pay for new hard-surfaced highways. [12]

The devastation of the flood and the strained racial relations resulted in many African Americans joining the Great Migration from affected areas to northern and midwestern cities, a movement that had been underway since World War I. The flood waters began to recede in June 1927, but interracial relations continued to be strained. Hostilities had erupted between the races; a black man was shot by a white police officer when he refused to be conscripted to unload a relief boat.[9][13] As a result of displacements lasting up to six months, tens of thousands of local African Americans moved to the big cities of the North, particularly Chicago; many thousands more followed in the following decades.[14]

Herbert Hoover enhanced his reputation by his achievements in directing flood relief operations as Secretary of Commerce under President Calvin Coolidge. The next year Hoover easily won the Republican 1928 nomination for President, and the general election that year. In upstate Louisiana, anger among yeomen farmers directed at the New Orleans elite for its damage of downriver parishes aided Huey Long's election to the governorship in 1928.[15]:408–409, 477, 487 Hoover was much lauded initially for his masterful handling of the refugee camps. Later reports about the poor treatment of blacks in those camps led him to make promises to the African-American community which he broke. As a result, he lost the black vote in the North in his re-election campaign in 1932.[15]:259–290 (Note: In the South, African Americans were still overwhelmingly disenfranchised by state constitutions and practices, as they remained until after passage of the Voting Rights Act of 1965.) Several reports on the terrible situation in the refugee camps, including one by the Colored Advisory Commission headed by Robert Russa Moton, were kept out of the media at Hoover's request, with the pledge of further reforms for blacks after the presidential election on 1928. His failure to deliver followed other disappointments by the Republican Party; Moton and other influential African Americans began to encourage black Americans to align instead with the national Democrats.[15]:415