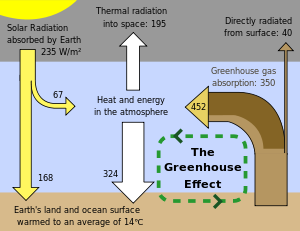 A representation of the exchanges of energy between the source (the Sun), Earth's surface, the Earth's atmosphere, and the ultimate sink outer space. The ability of the atmosphere to capture and recycle energy emitted by Earth's surface is the defining characteristic of the greenhouse effect.

On Earth, solar radiation at the frequencies of visible light largely passes through the atmosphere to warm the planetary surface. The surface itself emits energy at the lower frequencies of infrared thermal radiation. Infrared radiation is absorbed by greenhouse gases in the atmosphere. These gases also radiate energy, some of which is directed to the surface and lower atmosphere. The mechanism is named after the effect of solar radiation passing through glass and warming a greenhouse, but the way it retains heat is fundamentally different as a greenhouse works by reducing airflow, isolating the warm air inside the structure so that heat is not lost by convection.[2][3][4]

The existence of the greenhouse effect was argued for by Joseph Fourier in 1824. The argument and the evidence was further strengthened by Claude Pouillet in 1827 and 1838, and reasoned from experimental observations by John Tyndall in 1859.[12] The effect was more fully quantified by Svante Arrhenius in 1896.[13] However, the term "greenhouse" was not used to refer to this effect by any of these scientists; the term was first used in this way by Nils Gustaf Ekholm in 1901.[14][15]

In 1917 Alexander Graham Bell wrote "[The unchecked burning of fossil fuels] would have a sort of greenhouse effect", and "The net result is the greenhouse becomes a sort of hot-house."[16][17] Bell went on to also advocate the use of alternate energy sources, such as solar energy.[18] 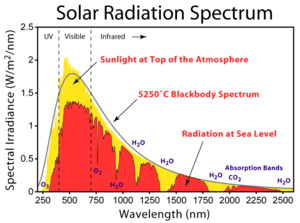 The basic mechanism can be qualified in a number of ways, none of which affect the fundamental process. The atmosphere near the surface is largely opaque to thermal radiation (with important exceptions for "window" bands), and most heat loss from the surface is by sensible heat and latent heat transport. Radiative energy losses become increasingly important higher in the atmosphere, largely because of the decreasing concentration of water vapor, an important greenhouse gas. It is more realistic to think of the greenhouse effect as applying to a "surface" in the mid-troposphere, which is effectively coupled to the surface by a lapse rate. The simple picture also assumes a steady state, but in the real world there are variations due to the diurnal cycle as well as the seasonal cycle and weather disturbances. Solar heating only applies during daytime. During the night, the atmosphere cools somewhat, but not greatly, because its emissivity is low. Diurnal temperature changes decrease with height in the atmosphere.

Within the region where radiative effects are important, the description given by the idealized greenhouse model becomes realistic. Earth's surface, warmed to a temperature around 255 K, radiates long-wavelength, infrared heat in the range of 4–100 μm.[19] At these wavelengths, greenhouse gases that were largely transparent to incoming solar radiation are more absorbent.[19] Each layer of atmosphere with greenhouses gases absorbs some of the heat being radiated upwards from lower layers. It reradiates in all directions, both upwards and downwards; in equilibrium (by definition) the same amount as it has absorbed. This results in more warmth below. Increasing the concentration of the gases increases the amount of absorption and reradiation, and thereby further warms the layers and ultimately the surface below.[8]

Greenhouse gases—including most diatomic gases with two different atoms (such as carbon monoxide, CO) and all gases with three or more atoms—are able to absorb and emit infrared radiation. Though more than 99% of the dry atmosphere is IR transparent (because the main constituents—N2, O2, and Ar—are not able to directly absorb or emit infrared radiation), intermolecular collisions cause the energy absorbed and emitted by the greenhouse gases to be shared with the other, non-IR-active, gases.

Atmospheric gases only absorb some wavelengths of energy but are transparent to others. The absorption patterns of water vapor (blue peaks) and carbon dioxide (pink peaks) overlap in some wavelengths. Carbon dioxide is not as strong a greenhouse gas as water vapor, but it absorbs energy in wavelengths (12-15 micrometers) that water vapor does not, partially closing the "window" through which heat radiated by the surface would normally escape to space. (Illustration NASA, Robert Rohde)[20]

By their percentage contribution to the greenhouse effect on Earth the four major gases are:[21][22]

It is not physically realistic to assign a specific percentage to each gas because the absorption and emission bands of the gases overlap (hence the ranges given above). The major non-gas contributor to Earth's greenhouse effect, clouds, also absorb and emit infrared radiation and thus have an effect on the radiative properties of the atmosphere.[22] 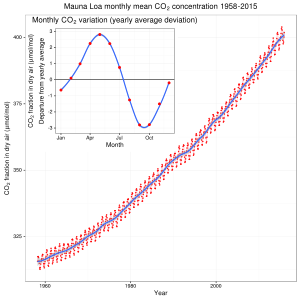 Strengthening of the greenhouse effect through human activities is known as the enhanced (or anthropogenic) greenhouse effect.[23] This increase in radiative forcing from human activity is attributable mainly to increased atmospheric carbon dioxide levels.[24] According to the latest Assessment Report from the Intergovernmental Panel on Climate Change, "atmospheric concentrations of carbon dioxide, methane and nitrous oxide are unprecedented in at least the last 800,000 years. Their effects, together with those of other anthropogenic drivers, have been detected throughout the climate system and are extremely likely to have been the dominant cause of the observed warming since the mid-20th century".[25]

CO2 is produced by fossil fuel burning and other activities such as cement production and tropical deforestation.[26] Measurements of CO2 from the Mauna Loa observatory show that concentrations have increased from about 313 ppm[27] in 1960 to about 389 ppm in 2010. It reached the 400ppm milestone on May 9, 2013.[28] The current observed amount of CO2 exceeds the geological record maxima (~300 ppm) from ice core data.[29] The effect of combustion-produced carbon dioxide on the global climate, a special case of the greenhouse effect first described in 1896 by Svante Arrhenius, has also been called the Callendar effect.

Over the past 800,000 years,[30] ice core data shows that carbon dioxide has varied from values as low as 180 parts per million (ppm) to the pre-industrial level of 270ppm.[31] Paleoclimatologists consider variations in carbon dioxide concentration to be a fundamental factor influencing climate variations over this time scale.[32][33] 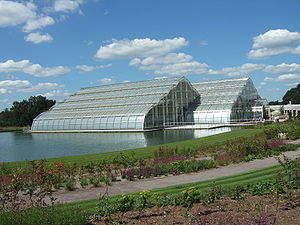 A modern Greenhouse in RHS Wisley

The "greenhouse effect" of the atmosphere is named by analogy to greenhouses which get warmer in sunlight. The explanation given in most sources for the warmer temperature in an actual greenhouse is that incident solar radiation in the visible, long-wavelength ultraviolet, and short-wavelength infrared range of the spectrum passes through the glass roof and walls and is absorbed by the floor, earth, and contents, which become warmer and re-emit the energy as longer-wavelength infrared radiation. Glass and other materials used for greenhouse walls do not transmit infrared radiation, so the infrared cannot escape via radiative transfer. As the structure is not open to the atmosphere, heat also cannot escape via convection, so the temperature inside the greenhouse rises.[34][35] The greenhouse effect, due to infrared-opaque "greenhouse gases" including carbon dioxide and methane instead of glass, also affects Earth as a whole; there is no convective cooling because no significant amount of air escapes from Earth.

A greenhouse is built of any material that passes sunlight, usually glass, or plastic. It mainly warms up because the sun warms the ground and contents inside, which then warms the air in the greenhouse. The air continues to heat because it is confined within the greenhouse, unlike the environment outside the greenhouse where warm air near the surface rises and mixes with cooler air aloft. This can be demonstrated by opening a small window near the roof of a greenhouse: the temperature will drop considerably. It was demonstrated experimentally (R. W. Wood, 1909) that a "greenhouse" with a cover of rock salt (which is transparent to infra red) heats up an enclosure similarly to one with a glass cover.[4] Thus greenhouses work primarily by preventing convective cooling.[3][37]

More recent quantitative studies suggest that the effect of infrared radiative cooling is not negligibly small, and may have economic implications in a heated greenhouse. Analysis of issues of near-infrared radiation in a greenhouse with screens of a high coefficient of reflection concluded that installation of such screens reduced heat demand by about 8%, and application of dyes to transparent surfaces was suggested. Composite less-reflective glass, or less effective but cheaper anti-reflective coated simple glass, also produced savings.[38]

In contrast, the greenhouse effect heats Earth because rather than retaining (sensible) heat by physically preventing movement of the air, greenhouse gases act to warm Earth by reradiating some of the energy back towards the surface. This process may exist in real greenhouses, but is comparatively unimportant there.

Bodies other than Earth

In the Solar System, there also greenhouse effects on Mars, Venus, and Titan; that on Venus is particularly large, due to its atmosphere, which consists mainly of dense carbon dioxide.[39] Titan has an anti-greenhouse effect, in that its atmosphere absorbs solar radiation but is relatively transparent to infrared radiation.[40] Pluto is also colder than would be expected, because evaporation of nitrogen cools it.[41]

The dictionary definition of greenhouse effect at Wiktionary