The sea has Arctic climate with regular northern winds and temperatures rarely rising above 0 °C. It previously contained the Odden ice tongue (or Odden) area, which extended eastward from the main East Greenland ice edge in the vicinity of 72–74°N during the winter and acted as a key winter ice formation area in the Arctic. The West Ice forms in winter in the Greenland Sea, north of Iceland, between Greenland and Jan Mayen island. It is a major breeding ground of harp seal and hooded seal that has been used for seal hunting for more than 200 years.

The International Hydrographic Organization defines the limits of the Greenland Sea as follows:[9]

On the East. The West coast of West Spitzbergen [sic] [island of Spitsbergen].

On the Southeast. A line joining the Southernmost point of West Spitzbergen [sic] to the Northern point of Jan Mayen Island, down the West coast of that island to its Southern extreme, thence a Line to the Eastern extreme of Gerpir (67°05'N, 13°30'W) [NB Actually at Lua error in Module:Coordinates at line 668: callParserFunction: function "#coordinates" was not found.] in Iceland.

On the Southwest. A line joining Straumness (NW extreme of Iceland) to Cape Nansen (Lua error in Module:Coordinates at line 668: callParserFunction: function "#coordinates" was not found.) in Greenland.

On the West. The East and Northeast coast of Greenland between Cape Nansen and the northernmost point.

While the sea is known for millennia, its first scientific investigations were carried out in 1876–1878 within the Norwegian North-Atlantic Expedition.[10] Since then, many countries, mostly Norway, Iceland and Russia have sent scientific expeditions to the area. The complex water current system was detailed in 1909 by the Fridtjof Nansen.[2]

The Greenland Sea was a popular hunting ground for the whaling industry for 300 years, until 1911, primarily based in Spitsbergen. At that point, the formerly rich whale population here, was so depleted that the industry was no longer profitable. The remaining whales of the Greenland Sea has been protected ever since, but the populations had not shown any proof of significant regeneration. In the last 20 years, polar biologists reports an increase in the local bowhead whale population and in 2015, arctic scientists discovered a surprising abundance of them in a small area. These results may be interpreted as an early sign of a beginning recovery for this particular species, that once formed the largest bowhead population in the world, at an estimated 52,000 whales.[11]

The inuit hunted whales on a non-industrial scale in the Greenland Sea since the fifteenth century, as evidenced by archaeology.[11] 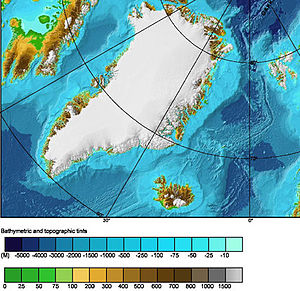 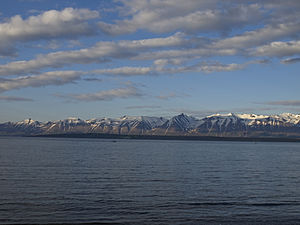 Eyjafjörður, the longest fjord in Northern Iceland, belongs to the Greenland Sea.

The Greenland Sea is bounded to the west by the island of Greenland, and to the south by the Denmark Strait and Iceland. To the southeast, behind the Jan Mayen island (Norway) lies the vast expanse of the Norwegian Sea, of which Greenland Sea may be considered an extension. Across the Fram Strait to the northeast, the sea is delimited by the Svalbard archipelago (Norway).

The bottom of the Greenland Sea is a depression bounded to the south by the underwater Greenland-Iceland ridge and to the east by the Mohns Ridge and Knipovich Ridge (parts of the Mid-Atlantic Ridge). To the west, the bottom rises first slowly, but then rapidly toward the wide Greenland coastal strip.[1] Silts fill the submarine hollows and gorges; silty sands, gravel, boulders, and other products of erosion coat the shelves and ridges.[2]

Although the deepest point inside of the sea is 4846 meters, depths down to 5570 meters have been measured in the Molloy Deep of the Fram Strait which connects the sea to the Arctic Ocean on the north.[12]

Major islands of the Greenland Sea include Svalbard archipelago, Edvards, Eila, Godfred Hansens, Île-de-France, Jan Mayen, Lynns, Norske and Schnauders Island. Of those, only the Svalbard islands are inhabited,[13] and Jan Mayen has only temporal military staff. After the League of Nations gave Norway jurisdiction over the island, in 1921 Norway opened the first meteorological station there, which was a subject of contention between Germany and United Kingdom during World War II.[14] Several radio and meteorological stations operate on the island nowadays. 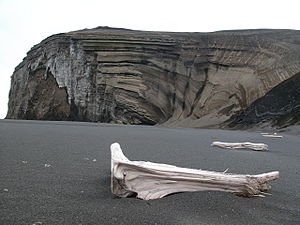 A beach on Jan Mayen island

Northern winds continue through the whole year, cooling the surface water and bringing ice to the south. The average surface water temperature is about −1 °С (30 °F) or lower in the north and 1–2 °C in the south; the corresponding summer temperatures are about 0 °C and 6 °C (43 °F).[2] The bottom water temperatures are below −1 °С. The surface water salinity is 33.0–34.5 parts per thousand (‰) in the eastern and below 32.0‰ in the western parts, increasing to 34.9‰ toward the bottom. The water color is green. Tides are semi-diurnal with the average height of 4.4 m. Together with the water currents, they break up the floating ice sheets and mix various water layers both laterally and along the depth.[1][2]

The progressively colder waters of North Atlantic Current sink in the Arctic Ocean, returning south in the form of cold East Greenland Current, an important part of the Atlantic conveyor belt, which flows along the western part of the sea. Along the eastern part flows the warm Spitsbergen Current, a part of Gulf Stream. Mixtures of cold, fresh water ice melt and the warm, salty Spitsbergen Current may experience cabbeling, and might contribute to thermohaline circulation. The combination of those currents creates a counter-clockwise water flow in the central part of the sea.[1][15][16]

Because of frequent fogs and winds and currents, which continuously transport ice and icebergs through the Greenland Sea to the south, the Greenland Sea has a narrow window for commercial navigation – the ice season starts in October and ends in August. Three types of floating ice are distinguished: Arctic pack ice (several meters thick), sea ice (about a meter thick) and freshwater icebergs.[2] 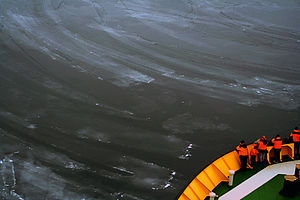 In winter, a large area north of Iceland, between Greenland and Jan Mayen, which is called West Ice is covered by continuous ice. It is a major breeding ground for seals, including harp seal, hooded seal and gray seal.[17][18] It was discovered in the early 18th century by British whalers and since late 1750s was used for seal hunting. The hunting was especially intensive in the 19th century, but declined in the 20th century due to hunting restrictions and then declined market demand.[19] Around 5 April 1952, a major storm resulted in disappearance of ships with 79 Norwegian seal hunters on board. Seven other Norwegian seal hunting vessels shipwrecked the same month.[20][21][22][23] 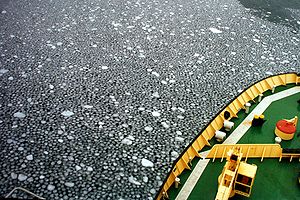 The Odden ice tongue or simply the Odden (Odden is Norwegian word for headland) was a key winter ice formation area in the Arctic. It was known for a long time and was encountered by Fridtjof Nansen but was only fully understood with the advent of satellite imagery.[24]

The Odden had a length of about 1,300 km and covered an area of up to 330,000 km² in most years. It extended eastward from the main East Greenland ice edge in the vicinity of 72–74°N during the winter because of the presence of very cold polar surface water in the Jan Mayen Current, which diverts some water eastward from the East Greenland Current at that latitude. Most of the already formed ice continued floating south, driven by the wind, so a cold open water surface was exposed on which new ice formed as frazil ice and pancake ice in the rough seas, producing a giant tongue shape.[25] The salt rejected back into the ocean from this ice formation caused the surface water to become denser and sink, sometimes to great depths (2500 m or more), making this one of the few regions of the ocean where winter convection occurred, which helped drive the entire worldwide system of surface and deep currents known as the thermohaline circulation.[15][16] The Odden Ice Tongue has not been observed since 1997.[26]

The Greenland Sea is densely inhabited by the organisms that form the base of the oceanic food chain. Large invertebrates, fish (such as cod, herring, redfish, halibut, and plaice), birds and mammals (including various species of seals, whales, and dolphins) all feed on the smaller invertebrates and small organisms. Mosses, lichens, and scanty bushes around the coasts serve as food to the deer and musk oxen, which in turn are hunted by the polar bear.[2]