Gregory Ain (March 28, 1908 – January 9, 1988) was an American architect active in the mid-20th century. Working primarily in the Los Angeles area, Ain is best known for bringing elements of modern architecture to lower- and medium-cost housing. He addressed "the common architectural problems of common people".[1]

Born in Pittsburgh, Pennsylvania in 1908, Ain was raised in the Lincoln Heights neighborhood of Los Angeles. For a short time during his childhood, the Ain family lived at Llano del Rio, an experimental collective farming colony in the Antelope Valley of California.

He was inspired to become an architect after visiting the Schindler House as a teenager. He attended the University of Southern California School of Architecture in 1927–28, but dropped out after feeling limited by the school's Beaux Arts training.

His primary influences were Rudolph Schindler and Richard Neutra. He worked for Neutra from 1930 to 1935, along with fellow apprentice Harwell Hamilton Harris, and contributed to Neutra's major projects of that period. 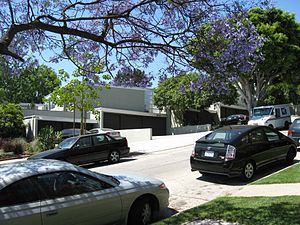 Beginning in 1935, Ain cultivated a practice designing modest houses for working-class clients. In these projects he wanted to address "the common architectural problems of common people", which prompted flexible floor plans and open kitchens.

Ain was awarded a Guggenheim Fellowship in 1940 to study prefabricated housing. During World War II, Ain was Chief Engineer for Charles and Ray Eames in the development of their well-known plywood chairs.

After the war, in Ain's most productive period, he formed a partnership with Joseph Johnson and Alfred Day in order to design large housing tracts. His major projects of this period included Park Planned Homes, Avenel Homes, Mar Vista Housing, and Community Homes. He collaborated with landscape architect Garrett Eckbo on each of these projects. They were an expression of Mid-century modern design. Ain also practiced in a "loose partnership" with James Garrott, and they built a small office building together on Hyperion Avenue in the Silver Lake neighborhood. These projects attracted the attention of Philip Johnson, the curator of architecture at the Museum of Modern Art, who engaged Ain to build a house in the museum's garden in 1950.

In the late 40s and early 50s, Ain's practice declined because he was perceived as a communist.[1] For example, in 1949 he was listed by the California Senate Factfinding Subcommittee on Un-American Activities as "among the committee's most notorious critics."[3] The growing "Red Scare" caused him to lose several opportunities, including participation in the Case Study Program.

Ain also taught architecture at USC after the war. Then, from 1963 to 1967, he served as the Dean of the Pennsylvania State University School of Architecture. He died in 1988.[4]

Ain's papers are kept at the Architecture and Design Collection, at the Art, Design & Architecture Museum, at the University of California, Santa Barbara.[5]