Griffin Boyette Bell (October 31, 1918 – January 5, 2009) was an American lawyer and former United States Attorney General. He served as the nation's 72nd Attorney General during the Jimmy Carter administration. He was an attorney with the law firm King & Spalding.

Bell was born on October 31, 1918 in Americus, Georgia to Adlai Cleveland Bell, a cotton farmer, and Thelma Leola Bell (Pilcher). He attended several public schools before enrolling at the Georgia Southwestern College and then the Walter F. George School of Law at Mercer University. During World War II, Bell served in the United States Army Quartermaster Corps from 1942 to 1946. Bell served as city attorney of Warner Robins, Georgia while still in school. He practiced law at King & Spalding in Georgia from 1948 to 1961. He returned to the firm before and after his service as the United States Attorney General. Bell handled many high-profile cases after leaving office, such as the internal investigation concerning the cash management practices of E. F. Hutton & Co..

President John F. Kennedy appointed Bell, who had been the co-chairman of Kennedy's presidential campaign in Georgia, to the Court of Appeals for the Fifth Circuit in 1961. He served for more than fourteen years on the Fifth Circuit. He often played an instrumental role in mediating disputes between the court's factions during the peak of the American Civil Rights Movement.

Griffin Bell was to sworn in office as the Attorney General.

In the aftermath of the disputed 1966 Georgia gubernatorial election between Democrat Lester Maddox and Republican Howard "Bo" Callaway, Bell joined Republican Judge Elbert Tuttle in striking down the Georgia constitutional provision requiring that the legislature chose the governor if no general election candidate receives a majority of the vote. The judges concluded that a malapportioned legislature might "dilute" the votes of the candidate with a plurality, in this case Callaway. Bell compared legislative selection to the former County Unit System, a kind of electoral college formerly used in Georgia to select the governor but invalidated by the U.S. Supreme Court. Bell and Tuttle granted a temporary suspension of their ruling to permit appeal to the U.S. Supreme Court and stipulated that the state could resolve the deadlock so long as the legislature not make the selection. In a five-to-two decision known as Fortson v. Morris, the high court struck down the Bell-Tuttle legal reasoning and directed the legislature to choose between Maddox and Callaway. Two liberal justices, William O. Douglas and Abe Fortas had argued against legislative selection of the governor, but the court majority, led this time by Hugo Black took the strict constructionist line and cleared the path for Maddox's ultimate election.[1]

Bell resigned from the Fifth Circuit in March 1976 to resume his law practice at King & Spalding. In December 1976, U.S. President Jimmy Carter nominated him to become the 72nd United States Attorney General. He served until August 1979. His Watergate-era nomination was initially controversial because he was a Southerner and a personal friend of the President. However, by the time he left office, Bell had allayed the concerns and won the praise of most of his critics in the United States Senate and the media. He was credited with bringing needed independence and professionalism to the Department of Justice. Unprecedented and not duplicated since, Bell posted publicly every day his third party contacts, including meetings and calls with the White House, members of Congress, or other non-Justice Department individuals, to rebuild confidence in the Department of Justice.

On April 10, 1978, Attorney General Bell announced the indictment of former Acting FBI Director L. Patrick Gray, Mark Felt and former FBI Assistant Director Edward Miller for authorizing break-ins of New York City radical political activists. Bell introduced requirements that any authorized illegal activities must be made in writing. Five Department of Justices attorneys resigned over the alleged reluctance of the Attorney Bell to pursue others in the department for illegal activities related to domestic spying. [2]

Bell led the effort to pass the Foreign Intelligence Surveillance Act in 1978. The Carter administration, advised by Bell, greatly increased the number of women and minorities serving on the federal bench. Bell recruited Wade McCree, an African American then serving as a judge on the Court of Appeals for the Sixth Circuit, to serve as United States Solicitor General, and Drew S. Days, III, an African American lawyer for the NAACP Legal Defense Fund he had admired in oral arguments before him, to head the Civil Rights Division. Bell successfully led the negotiations to divide his former appellate court, the Fifth Circuit (spanning from Georgia to Texas) into two courts: a new Fifth Circuit based in New Orleans and an Eleventh Circuit based in Atlanta. Bell also led efforts to professionalize the Federal Bureau of Investigation after Watergate and recruited another federal appellate judge to recommend to the President as Director, Judge William Webster of the Eighth Circuit. After Bell resigned as Attorney General in August 1979, President Carter thereafter appointed him as Special Ambassador to the Helsinki Convention.

From 1985 to 1987, Bell served as a member of the U.S. Secretary of State's Advisory Committee on South Africa. In 1989, he was appointed Vice Chairman of President George H. W. Bush's Commission on Federal Ethics Law Reform. During the Iran-Contra affair investigation, he was counsel to President George H.W. Bush. As a lawyer during this period, he specialized in corporate internal investigations, many that were high-profile, like that for E.F. Hutton following federal indictments for its cash management practices. 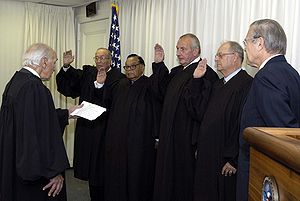 Bell being sworn in on the Court of Military Commission Review. Bell is the second individual from the left.

In September 2004 he was appointed the Chief Judge of the United States Court of Military Commission Review.[3] Bell was replaced by Judge Frank J. Williams in July 2007, when the first two cases were appealed to the Court, due to ill health.

Bell, whose wit has been widely reported, was an especially popular member of the Carter Cabinet and well known in the social scene. Bell introduced rooster pepper sausage as one of the more publicized foods in Washington. The dish, made from rooster spur pepper from Georgia, was widely rumored to be an aphrodisiac. It was maintained that he slipped supplies of the potent sausage into the White House to President Carter through their mutual close friend, Charles Kirbo.

The Alfalfa Club is a century-old Washington institution of social, political and business America. At its annual dinner in 1979, Bell was the Alfalfa nominee for President of the United States and quipped as he began his acceptance speech that he hoped that President Carter would now understand the full meaning of his warning that he would not serve as Attorney General during the President's re-election campaign. Bell (as well as Jimmy Carter) is a member of the Gridiron Secret Society.

Griffin Bell died on January 5, 2009. According to the Associated Press, Bell was being treated for complications from pancreatic cancer and had been suffering from long-term kidney disease.[4] Georgia governor Sonny Perdue ordered the flag of the United States flown at half-staff in the state of Georgia on January 7, 2009, the day of Bell's funeral.[5] He is buried in Americus' Oak Grove Cemetery, Section N3-South, where his tombstone bears the inscription "Citizen Soldier, Trial Lawyer, Federal Appellate Judge, Attorney General of the United States."

In December 2008, Bell received an honorary Doctor of Humanities degree from Georgia Southwestern State University in recognition of his achievements and appreciation for his efforts to promote the interests of his alma mater.[6]