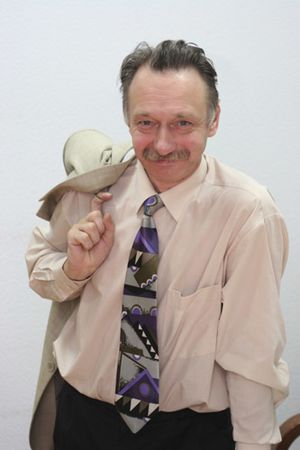 Demidovtsev wrote eight books of novels and a collection of stageplays:

Some of them were translated into English to be collected in the Fantastic stories.

In the Breath of the Past and the Russ we hadn't known about, Demidovtsev depicts a fictional European country Nevoruss. "Nevoruss " is the Russian word for "Neva Russ," literally “Russ at the Neva river”. Nevoruss is considered to be a successor state of the medieval Novgorod Republic. It managed to avoid Muscovite conquest in the 15th century and due to commercial activity of its inhabitants continued to thrive. Thus Russia had never united, so its place shares Nevoruss and Muscovy. Their opposition resembles that of Jesusland and the United States of Canada. Besides Russian territories Nevoruss due to its early colonial expansion also controlled the Baltic states, Scandinavia with Iceland and Greenland, some parts of North America (including Alaska and the whole Canada) as well as some important islands (among them Cuba, Canaries and Hawaiian Islands ).