He was born in Melitopol in the Zaporizhia Oblast of Ukraine to Naum Rubanov and Claudia Chuchrai. Grigori's parents divorced when he was three years old. He was raised by a stepfather Pavel Litvinenko. A decorated veteran of World War II, Chukhrai's wartime experiences profoundly affected him and the majority of his films were connected with events of the war. Drafted in 1939, he served in the 229th separate communications battalion of the 134th Infantry Division. From 1943 on, he served in airborne troops and took part in operation "Dnipro Troopers".[2]

At war's end, he studied filmmaking at the Soviet State Film School and then developed his craft as a director's assistant at the Kiev Film Studio. By the mid-1950s, he began writing and directing his own films, gaining cinematic recognition outside the Soviet Union at the 1957 Cannes Film Festival with his film Sorok pervyj (The Forty-first).[2]

In 1959, Chukhrai co-wrote and directed his greatest work, Ballad of a Soldier. A story of love and the tragedy of war made without the usual Soviet propaganda, the film received great acclaim at home, earning the prestigious Lenin Prize. It was heralded internationally for both its story and cinematic technique and at Cannes in 1960 the film was awarded a special jury prize for "high humanism and outstanding quality." Ballad of a Soldier overcame the Cold War barrier and premiered in the United States in 1960 at the San Francisco International Film Festival in San Francisco, California. The film won the Festival's Golden Gate Award, for Best Picture and for Best Director for Grigori Chukhrai. Playing worldwide, the following year, it earned the BAFTA Award for Best Film. Grigori Chukhrai and script co-writer Valentin Yezhov were also nominated for an Academy Award for Writing Original Screenplay.

Chukhrai's next film, released in 1961, was titled Chistoye nebo (Clear Skies) and told the story of a Soviet pilot who survives Nazi imprisonment during the war but is later accused of being a spy. It was one of the first Soviet films to deal with some of the repressive practices under the Soviet leadership of Premier Joseph Stalin. It won the Grand Prix (in a tie with Kaneto Shindo's The Naked Island) at the 2nd Moscow International Film Festival.[3] Two years later, he was the President of the Jury at the 3rd Moscow International Film Festival.[4] 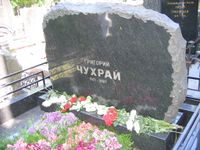 In 1984, at age 63, Chukhrai together with director Yuri Shvyryov made his final film in the Soviet Union: Ya nauchu vas mechtat... (I'll Teach You to Dream). In 1992/93 with German director Rolf Schübel he co-directed a two-part documentary about the battle of Stalingrad Todfeinde. Vom Sterben und Überleben in Stalingrad in which Chukhrai as well as other Russian and German survivors told about their experiences during the battle. The film was a German-Russian co-production.

He published a book of war memoirs and in 1994, for his lifetime contribution to film, Chukhrai was given a Nika Award, the Russian film industry's equivalent of an Oscar.[5]

He was married to Iraida Chukhrai (nee Penkova), a teacher of Russian language and literature. They had two children: Pavel Chukhrai (born 1946), a prominent Russian director, and Elena Chukhrai (born 1961), an expert in film studies.

Grigori Chukhrai died of heart failure in Moscow in 2001 at the age of eighty. He was buried on the Vagankovo Cemetery.