Ordzhonikidze was born in present-day Kharagauli, western Georgia into a Georgian noble family.[2] According to some sources he graduated as a doctor from the Mikhailov Hospital Medical School in Tiflis, but other sources characterise him as poorly-educated and state that he qualified only as a medical orderly.[3]

He became involved in radical politics in 1903 and took part in the Revolution of 1905-1907. He was arrested for smuggling arms in December 1905,[4] but when released on bail after five months he fled to Germany. In 1907 he returned to the Caucasus and settled in Baku, where he worked as a medical assistant while involved with Stalin and others in Bolshevik activity. Historians have come to believe that Ordzhonikidze played a role in the 1907 assassination of Prince Ilia Chavchavadze, a prominent Georgian poet and intellectual.[5] In 1907 he was arrested at a May Day demonstration and served 26 days in prison under the pseudonym "Kuchishvili." He later spent 18 months in prison in Sukhumi as a result of his 1905 arrest.[4]

Ordzhonikidze participated in the Persian Constitutional Revolution on a mission by the Bolshevik party and stayed in Tehran for a time around 1909.[6]

He was arrested for being a member of the Social Democratic Party and deported to Siberia, but managed to escape three years later. He returned with Stalin to Saint Petersburg in April 1912, but was again apprehended and sentenced to three years' hard labour.

During the course of the Russian Civil War, he became a commissar for Ukraine and took part in fighting against the White Army of Anton Denikin in the Caucasus. Appointed chairman of Kavbiuro, the Caucasian Bureau of the Russian Communist Party in 1920, he was instrumental in the incorporation of the Caucasus in the nascent Soviet Union. After the Azerbaijan and Armenia had been taken over by the Bolsheviks, in 1921, Ordzhonikidze led an Bolshevik invasion of the Democratic Republic of Georgia and established the Socialist Republic of Georgia.[7] Later, he fought to reduce Georgian autonomy from the Russian SFSR and hence became a key figure involved in the Georgian Affair of 1922.[8] His brutal treatment of Georgian communists antagonised Lenin who proposed he be expelled from the Communist Party.[3] During the same period, he also aided Mirza Koochak Khan in establishing the short-lived Socialist Republic of Gilan in northern Iran.[9]

For a time[when?] Ordzhonikidze served for the collegium of the new Cheka.

Ordzhonikidze became a candidate (non-voting) member of the Politburo in 1926, but was relieved of his duties the same year. He became a full member in 1930.[10]

He was appointed Peoples' Commissar of Soviet Heavy Industry in 1932.[11] , an important role as the Second Five-Year Plan gave priority to the development of heavy industry. However Conquest[3] states that he was entirely dependent on the technical skills and knowledge of his deputy, Georgy Pyatakov. Conquest[3] reports that he knew the allegations against Pyatakov were false and had Stalin’s assurance that he (Pyatakov) would not be executed.

The depth of Ordzhonikidze’s devotion to Stalin is disputed. In 1932, with other Politburo members, he reportedly opposed the persecution of those involved in publishing the “Ryutin Platform”, bringing him into conflict with Stalin who was anxious to destroy “rightists” in the Party.[3] Sent to the provinces during the Great Famine he reported correctly that it was a disaster.[3]

According to historian Roy Medvedev, Ordzhonikidze also opposed the purges of Stalin, Lazar Kaganovich and Nikolai Yezhov and the arrest of his deputy Pyatakov.[12] However historian Oleg Khlevniuk[13] reports finding no evidence in Soviet archives that Ordzhonikidze disagreed with the Moscow Trials, including that of Pyatakov. According to the archives, Ordzhonikidze questioned Pyatakov personally, and was convinced of his guilt.

Ordzhonikidze was named as the target of one of many assassination plots alleged to have been formed by defendants in the Zinoviev-Kamenev trial, which the Great Soviet Encyclopedia alleges, shortened his life. [14]

Ordzhonikidze is reported to have suffered a heart attack in November 1936.[3]

Ordzhonikidze died during the night of February 17–18, 1937. On February 19, Pravda published a report signed by three doctors and by the People's Commissar for Health Grigory Kaminsky, affirming that Ordzhonikidze "died of paralysis of the heart."[15] Conquest[3] says the certificate “is known to be a fake”, and one witness is said to have been “unwilling” to sign.[16]

An alternative version that Ordzhonikidze committed suicide in despair at the course of events was first mentioned by Nikita Khrushchev during his Secret Speech of February 25, 1956, and repeated in his speech to the 22nd Party Congress in 1961. In his memoirs[citation needed] Khrushchev gives two contradictory sources for this story: Anastas Mikoyan, who supposedly told him after the war, and Georgy Malenkov, who supposedly told him during the war itself.

A further version is that Ordzhonikidze was killed, or forced into suicide, on Stalin’s orders. This was reported from soon after World War II.[17] Conquest[3] reports that witnesses saw men fleeing Ordzhonikidze's residence just after his death. This version has some plausibility given political conditions in the USSR at the time, and events such as the death of Kirov. Ordzhonokidze had reportedly become another of Stalin’s targets by late 1936. In 1955-56, former NKVD officers were tried on charges of “collecting slander” against Ordzhonikidze at this time, presumably as a prelude to his trial, and Stalin liquidated many of Ordzhonikdze’s associates, an indication that he had fallen from favour.[3] 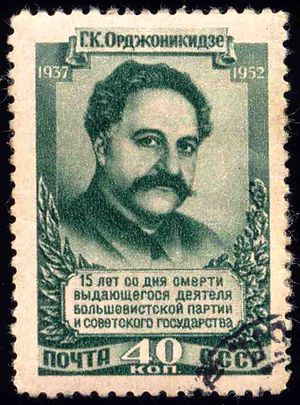 Several towns and districts in the USSR were renamed Ordzhonikidze after him, such as Vladikavkaz in Russia and Vahdat in Tajikistan (both names later reverted). Sokol plant, the main producer of MiG fighters, was named in honour of Ordzhonikidze, as well as the Moscow Aviation Institute (MAI). A Sverdlov class naval cruiser named after him took Khrushchev on his 1956 visit to the UK, where the vessel was the target of a botched espionage attempt by frogman ”Buster” Crabb.