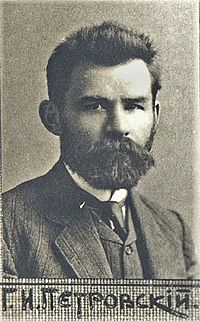 Grigory Ivanovich Petrovsky (Russian: Григо́рий Ива́нович Петро́вский , Ukrainian: Григорій Іванович Петровський Hryhoriy Ivanovych Petrovsky) (3 February 1878 - 9 January 1958) was one of the most prominent Russian revolutionaries of Ukrainian origin,[2] He also was participant in the signing two of the most important documents in the Soviet history: the Treaty on the Creation of the USSR and the Treaty of Brest-Litovsk, as well as one of organizers of agricultural collectivization in Ukraine.[3][4]

Petrovsky was born in a village of Pechenihy in Kharkov Governorate on 3 February (Old Style - 22 January) 1878, in the family of a craftsman (some sources claim - son of tailor and laundrywoman). He had two siblings. At the age of three Grigory lost his father.

After finishing two classes of school at the Kharkiv Theological Seminary in 1889, Petrovsky was dismissed for not being able to pay for his tuition. Being 11 years old he left education for a job in the city working for a locomotive depot. In 1893 at age of 15 he arrived to Yekaterinoslav (Dnipropetrovsk) where he found a job at the Bryansk Metallurgical Factory (today - Petrovsky Factory).

In 1895 Petrovsky joined the revolutionary movement and in 1897 enrolled in the Russian Social Democratic Labour Party (RSDRP) and joined the "Union in the fight for the liberation of the worker's class" as well as the Yekaterinslav committee of RSDRP. At this period of time he actively participated in the political agitation for the Bolsheviks from Mykolaiv to Mariupol, from Donets basin to Kharkiv, for which he was arrested in 1900 and 1903.

During the Russian Revolution of 1905 Petrovsky became one of the organizers and leaders of the Dnipropetrovsk City Council of Worker's Deputies and the local Battle Strike Committee. However, he soon was forced to flee and for a brief period of time emigrated to Germany. In 1907 he returned to Mariupol where he worked as a turning specialist and continued his revolutionary activity at the factory "Russian Providence" (today - part of Ilyich Steel & Iron Works).

In 1912 Petrovsky was elected a deputy to the Russian 4th State Duma as a representative of workers of the Yekaterinoslav Governorate for Bolshevik faction. During this time he also was a chief editor of Pravda. In January 1913 Petrovsky was included into the Central Committee of RSDRP. It is known that in the Duma he spoke on 32 occasions, while the text of his 21st speech was prepared personally by Vladimir Lenin. In his speeches Petrovsky was addressing the issues related to improving working conditions and life of miners and workers of Donets basin.

With the start of World War I in November 1914 he was arrested along with the other six Bolshevik members of the parliament and in February 1915 was sentenced to a lifetime exile in Turukhansky Krai (today - the northern part of Krasnoyarsk Krai).

After the Bolshevik seizure of power Petrovsky was appointed People's Commissar for the Interior Affairs between 30 November 1917 and 1 March 1919.[5] In this post he oversaw the activities of the Cheka and was one of the advocates of the Red Terror, he wrote in his order "A huge number of hostages has to be taken to the bourgeoisie, in cases of resistance these hostages have to be shot in masses(....) No hesitation in the application of the terror"[6] He was a member of the Russian delegation during signing the Treaty of Brest-Litovsk in 1917.

On 30 December 1922 he became the representative of Ukraine SSR in the USSR Central Executive Committee after signing the decree for the creation of the Soviet Union. According to the BBC, "Petrovsky saw himself as an internationalist, and rejected Ukrainian nationalism".[2] He was co-chairman of the USSR Central Executive Committee until 12 January 1938, when he was elected deputy chairman of the presidium of the Supreme Soviet of the USSR.

Survivor of the Great Terror

He was not purged during the Great Terror, but he was shocked and saddened by the executions of close friends such as Stanislav Kosior, Vlas Chubar and Sukhomlin.[7] Soon after the USSR celebrated its sixteenth birthday, he was interrogated by Joseph Stalin, who told him, "We shoot people like you but you will be spared"[7] and then was excluded from the Communist Party and deprived of his dachas and apartments.[7] After a year without a job, in 1940 he was made the director of the Revolution Museum of the USSR in Moscow and never returned to politics. During the Second World War, after the death of his son Leonid,[8] he asked Stalin in a letter to release his imprisoned son Peter, but he was subsequently shot.[7] Petrovsky died in 1958.

Petrovsky's body is interred near the Kremlin wall in Moscow.[2]

The city Dnipropetrovsk (originally named Yekaterinoslav) was named after Petrovsky in 1926.[2][9] Some Ukrainians think the city should have been renamed after Ukraine gained independence in 1991.[2] On 15 May 2015 President of Ukraine Petro Poroshenko signed a bill banning communist propaganda; the new law means that places and street names associated with Communism have to be renamed within a six month period that started on 15 May 2015.[10] In mid-April 2015 a Dnipropetrovsk city council commission was already being set up to choose a new name.[10]

A statue of Petrovsky in Kiev (the capital of Ukraine) was demolished in late November 2009, just days before the annual Ukrainian commemorating of the victims of the Holodomor. President of Ukraine Viktor Yushchenko had issued a decree ordering the removal of monuments to Soviet leaders, "in memory of the victims of the Holodomor". Ukrainian historians' consensus considers Petrovsky one of the main executors of Stalin's policies in Ukraine. Other historians, like Vasyl Marochko, a member of an official commission that investigated the Holodomor, say that when Petrovsky realised the extent of the famine, he pleaded twice with Stalin to provide Ukrainians with more food but this request went unheeded.[2]