The Grob G109 is a light aircraft developed by Grob Aircraft AG of Mindelheim Mattsies in Germany. It first flew (G109 prototype and then Production G109A form) in 1980 the G109B followed in 1984. It is a two-seat self-launching motor glider in which the pilot and passenger or student sit side by side, with good visibility provided by large windows. As well as normal civilian use this aircraft is now also used in Volunteer Gliding Squadrons by the Royal Air Force to train Air Cadets through the Gliding Induction and Gliding Scholarship courses. The Grob 109B is known in RAF service as the Vigilant T1.[1]

The G109B was developed after series production of the G109A which itself followed a number of early prototypes with differing wing spans, configurations etc. The G109B addressed several issues learnt from operation of the earlier G109A which included improvements to power (95Hp up from 80Hp on the G109A), performance of the wings when wet, crosswind behaviour and limits and cockpit space.

The G109B aircraft is a low-wing cantilever motor glider, with a T-tail, folding (and detachable) wings, and side-by-side seating with dual controls. It is mainly constructed from glass-reinforced plastic and has a taildragger undercarriage arrangement. Entry and exit from the cockpit is via two perspex doors which open upwards individually – a modification from the original one-piece G109A canopy. The cockpit can be heated, providing that the engine is running, and the seat backs can be adjusted and cushions of differing thickness inserted to accommodate a range of body sizes.

Total weight is around 1,870 pounds (850 kg) with a maximum load of 506 pounds (230 kg) though this depends on mod state and history of the airframe and is rarely above 200 kg on most examples. The Royal Air Force sought and obtained a number of military specific modifications; including a dispensation from Grob for operating the military variant aircraft to a Max AUW of 908 kg providing an extra 59 kg of useful load. The aircraft was not modified to allow this and no changes to the operating procedures were required as the centre of gravity constraints were not exceeded. Grob have applied to EASA for permission to have an exception to the design standard (CS22) for the Grob 109B which would allow it to be certified to a similar 903Kb Max AUW however while the two objections received were rejected by EASA the authority has not yet taken the necessary rulemaking action to allow this. Cruising speed is in the region of 60–100 knots (110–190 km/h) on the 95 horsepower (71 kW) engine, which can give the aircraft a top speed of 130 knots (240 km/h). The engine (based on a Porsche air-cooled car unit) can be shut down in flight with its propeller blades feathered. The aircraft then becomes a pure glider, with a best glide ratio of around 1:28. The Porsche-derived horizontally opposed air-cooled engine had the cylinder bore increase by Grob to make the engine 2.5-litre capacity and has had its Time Before Overhaul (TBO) increased by a technote to 1,600 hours after many examples run on condition reached up to or in excess of 4,000 hours in service. 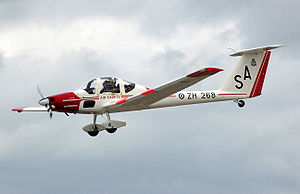 The G 109B is powered by a Grob 2500 E1 horizontally opposed, four-cylinder, air-cooled petrol engine that develops approximately 95 bhp (71 kW) at 2,950 rpm. The propellor is a two-bladed, manually operated variable-pitch type driven directly from the engine. Three pitch settings can be used: Fine for take-off and general flying, Coarse for cruising, and Feathered for gliding with the engine off.

Hot air can be supplied to the twin carburettors when there is a risk of icing. An electric fuel pump is used.

The G 109 uses conventional controls, duplicated for both seats, including the throttle (not available on the left in standard production G 109s). The rudder pedals, which also operate the wheel brakes, are adjustable forward and backward to suit individuals of differing leg length and airbrakes are used to increase the rate of descent during the landing approach as well as limiting airspeed to Vne (Velocity never exceed), if required. 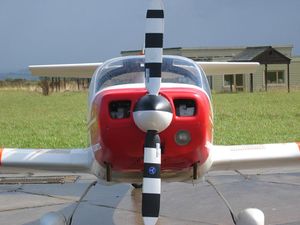 The Vigilant T1 variant was introduced into service in 1991, replacing the Slingsby Venture, and is used by Volunteer Gliding Squadrons (VGS) around the UK to train Air Training Corps and Combined Cadet Force cadets in basic flying with the aim of bringing them to a standard where they are able to fly solo. The Vigilant is also used by the Royal Air Force Central Gliding School, at RAF Syerston in Nottinghamshire, which trains VGS instructors as well as providing standards checking, syllabus development and engineering support.

The RAF Vigilant fleet has been 'paused' from flying for the past year due to ongoing maintenance issues associated with airworthiness certification. A recovery plan is in operation which should see Vigilant resume flying with a small number of squadrons in the latter half of 2015, followed by a gradual buildup back to full operating capacity.

The first two prototype aircraft (constructor's serial numbers 6001 and 6010) were designated G 109. They differed from later production aircraft by having a shorter wing span of 15 metres (49 ft). The first prototype, (registered D-KBGF), flew for the first time on 14 March 1980.[3]

The spare engine power available was marginal in hot atmospheric conditions or when flying through rain, so around 30 G 109A airframes were fitted with a 2,400 cc 90 horsepower (67 kW) Limbach engine and an electrically controlled variable-pitch propeller. At least two aircraft have been approved to use the Rotax 912 engine. See G 109Ar.

The G 109Ar was a modification used on 2 Grob109A by the Aero Club Valkenburg of two aircraft with a Rotax[4] boxer-type engine for increased performance on short runways and reliability. The nose of the plane is longer than that of the regular G 109A, the engine covers are shaped differently to house the engine and its air inlets and improve airflow across the larger radiator. 3 Grob109A's were converted on the G109Ar. The Aero Club Valkenburg still has 2 of these, the ph-710 and ph-835.

Developed out of the Grob G 109A; the wingspan was further increased to 17.4 metres (57 ft), the one-piece canopy of the earlier versions was replaced with opening doors, and the main landing gear was moved rearwards to ease weight on the tail wheel.[5] The engine was replaced with a Grob-built 2,500 cc unit of 95 horsepower (71 kW).

Some aircraft in Germany have been fitted with a turbocharged engine, and with structural strengthening of the fuselage have been adapted to aero-tow gliders. 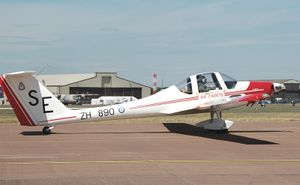 The Vigilant T1 is the designation of the adapted Grob 109B used by the Royal Air Force (RAF) for use on Volunteer Gliding Squadrons. Modifications to the Vigilant T1 include a landing light, a higher maximum all up mass (AUM) of 908 kg and a throttle for use in the left hand seat. The initial order for 53 has been topped up by aircraft bought in the private market. 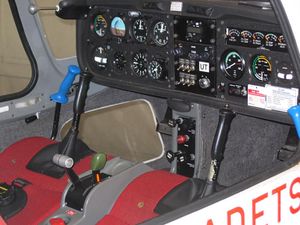