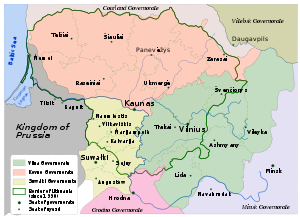 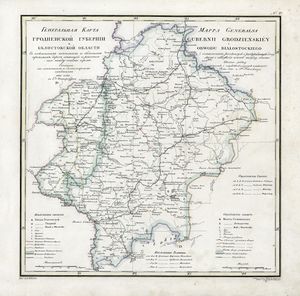 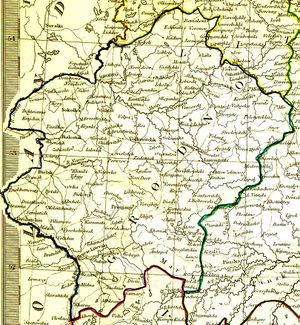 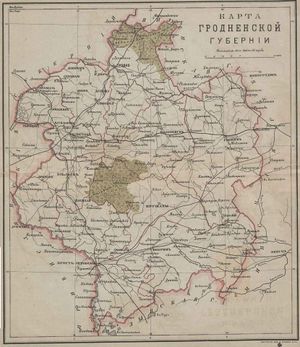 Grodno: a western province or government of Russia lying between about 52° to 54° N latitude and 21° to 24° E longitude, and bounded N by Vilna E by Minsk S by Volhynia and W by the former kingdom of Poland 14,961 square miles (38,750 km2) The province was a wide plain in parts very swampy and covered with large pine. Of these that of Bieloviecza in the district of comprising a circuit of over 100 miles (160 km) deserves notice. There bisons were preserved. The navigable rivers are Niemen, Bug, Narev, and Bobra. There were also canals among which those of Augustow and Oginsky. The most important The soil being chiefly alluvial intermixed with sand waws favorable for agriculture anil rearing of cattle and bees. The atmosphere is damp misty and the climate in winter is cold. Large of rye, barley, oats, hops, hemp and flax were raised but amount of fruit and vegetables grown was small. The products were insignificant. The manufactures of woollen cloths, hats, leather, paper and spirits. There also a good export trade in grain, wool, cattle. Some forty fairs were held annually in the province.

It was divided into nine districts, viz. Grodno, Brest, Bielsk, Volkovysk, Kobryn, Prushana, Slonin and Białystok. The administration of the whole province was in the governor appointed by the crown. In 1870 the population was 1,008,521 comprising Lithuanians, Poles, Belarusians, Tartars, and a few German colonists. Grodno's capital was Grodno, on the right bank of the Niemen in 53 40 N lat 23 E long, and was connected by railway with Moscow and Warsaw. It contained eight Roman Catholic, one Eastern and two United Greek Catholic churches, a chapel, and two Jewish synagogues. The office is a splendid edifice. There were two fine erected respectively by Stephen Batory who died here 1586 and Augustus III (kings of Poland). Among other buildings were a public library, a school of a gymnasium, and several seminaries. The 24,789 were engaged in the manufacture of woollen hats, paper, and the preparation of wax. Three fairs were held annually.

Grodno was built in the 12th century and at the commencement of the 13th it was annexed to Poland. The diet held there in 1793 ratified the partition of Poland. Two years later Stanislaus, the last king, signed his abdication there.[1]

The seat was in Grodno. It divided into 9 Uyzeds (Provinces):[2]

The governorate was formed in 1796, in the aftermath of the final partition of Polish-Lithuanian Commonwealth, and originally known as Slonim Governorate, but that only existed until December 12, 1796, when Paul I merged it with Vilna Governorate to form Lithuania Governorate.[2]

The Slonim Governorate had 8 provinces:

Just a year later, on December 12, 1796, by order of Tsar Paul I they were merged into one governorate, called the Lithuanian Governorate, with its capital in Vilnius.[3]

The Lithuania-Grodno Governorate had 8 provinces:

In 1843, another administrative reform took place. The Vilnius Governorate received the Lida district from the Grodno Governorate [5] and the Belostok Oblast was incorporated into it as the districts of Belostok, Belsk and Sokolka. Also, Novogrudok one to Minsk Governorate[2]

The Grodno Governorate had 9 provinces:

The Grodno Governorate was occupied by Germany in 1915 during World War I. It was known as the Bialystok-Grodno District of Ober-Ost. After the Peace of Riga on 18 March 1921, which ended the Polish-Soviet War,[6] the governorate became the voivodeships of Białystok, Nowogródek and Polesie of the Second Polish Republic.[7]