Group of Soviet Forces in Germany

Russian forces remained in Eastern Germany after the dissolution of the Soviet Union and the reunification of Germany until 1994. 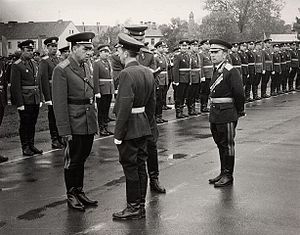 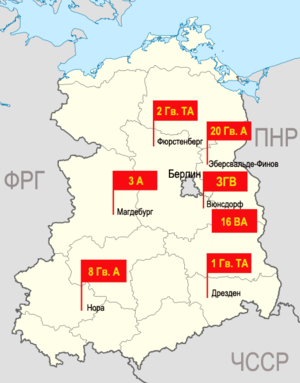 Disposition of Soviet armies in 1991 in eastern Germany

The Group of Soviet Occupation Forces, Germany, was formed after the end of the Second World War from formations of the 1st and 2nd Belorussian Fronts. On its creation on 9 July 1945 it included:

The GSFG had the task to ensure for the adherence to the regulations of the Potsdam Agreement. Furthermore, they represented the political and military interests of the Soviet Union. In 1957 an agreement between the governments of the Soviet Union and the GDR laid out the arrangements over the temporary stay of Soviet armed forces on the territory of the GDR, the numerical strength of the Soviet troops, and their assigned posts and exercise areas. It was specified that the Soviet armed forces were not to interfere into the internal affairs of the GDR, as they had done during the Uprising of 1953 in East Germany.

Following a resolution of the government of the USSR in 1979/80 20,000 army personnel, 1,000 tanks and much equipment were withdrawn from the territory of the GDR, among them the 6th Guards Tank Division, HQ Wittenberg.

Error creating thumbnail: File with dimensions greater than 25 MP
Organization as of 1988

In the course of Perestroika the GSFG was realigned as a more defensive force regarding strength, structure and equipment. This entailed a clear reduction of the tank forces in 1989. The GSFG was renamed the Western Group of Forces on 1 June 1989.[2] The withdrawal of the GSFG was one of the largest peacetime troop transfers in military history. Despite the difficulties, which resulted from the dissolution of the Soviet Union in the same period, the departure was carried out according to plan and punctually until August 1994. Between the years of 1992 and 1993, the Western Group of Forces in Germany (along with the Northern Group of Forces), halted military exercises.

The return of the troops and material took place particularly by the sea route by means of the ports in Rostock and the island of Rügen, as well as via Poland. The Russian Ground Forces left Germany on 25 June 1994 with a military parade of the 6th Guards Motor Rifle Brigade in Berlin. The parting ceremony in Wünsdorf on 11 June 1994 and in the Treptow Park in Berlin on 31 August 1994 marked the end of the Russian military presence on German soil.

In addition to German territories, the Group of Soviet Forces in Germany operational territory also included the region of town of Szczecin, part of the territories transferred from Germany to Poland following the end of the Second World War. The rest of Poland fell under the Northern Group of Forces, while the southern regions (Austria, Czechoslovakia) were under the Central Group of Forces.

Generals directing the withdrawals from Germany diverted arms, equipment, and foreign monies intended to build housing in Russia for the withdrawn troops. Several years later, the last GSFG commander, General Matvei Burlakov, and the Defence Minister, Pavel Grachev, had their involvement exposed. They were also accused of ordering the murder of reporter Dmitry Kholodov, who had been investigating the scandals.[3]

Structure and equipment in 1991 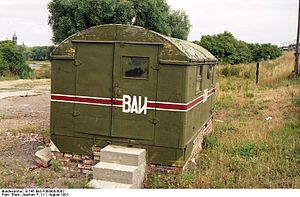 The Soviet troops occupied 777 barracks plants at 276 locations on the territory of the German Democratic Republic. This also included 47 airfields and 116 exercise areas. At the beginning of 1991 there were still about 338,000 soldiers in 24 divisions, distributed among five land armies and an air army in what was by then the WGF. In addition, there were about 208,000 relatives of officers as well as civil employees, among them about 90,000 children. Most locations were in the area of today's Brandenburg. 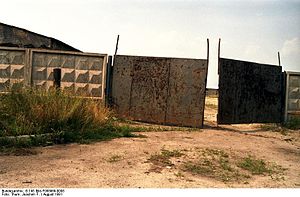 At the end of the 1980s, the primary Soviet formations included:[5]

Commanders-in-Chief of the GSFG 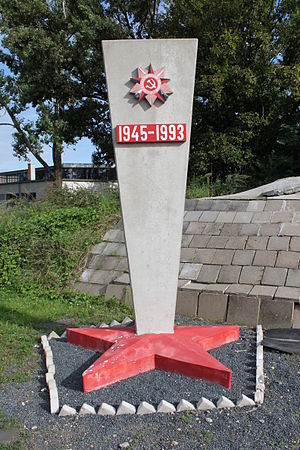 Memorial at the Airport in Großenhain

The first three Commanders-in-Chief were also Chiefs of the Soviet Military Administration in Germany.