The Guatemalan Air Force (Fuerza Aérea Guatemalteca or FAG) is a small air force composed mostly of U.S.-made aircraft throughout its history. The FAG is a subordinate to the Guatemalan Military and its commanding officer reports directly to the Commander in Chief of the Army, the President. 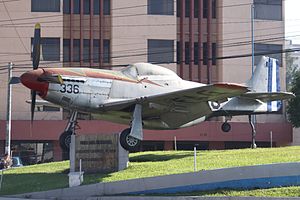 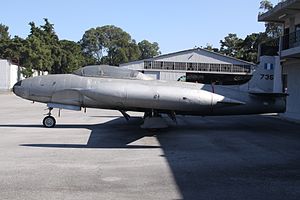 In 1920 a French military aviation mission opened a flying training school. The 'Cuerpo de Aviacion Militar de Guatemala was established in 1929 – with pioneer pilots Jacinto Rodríguez Díaz and Miguel Garcia Granados Solís, among others – and started to expand in 1934. The outbreak of World War II hindered any further expansion until 1942, when Guatemala started to receive lend-lease military assistance. Guatemala signed the Rio Treaty of Inter-American Assistance in 1947. The air force was renamed the Fuerza Aerea Guatemalteca (FAG) in 1948. In the 1960s, the strike aircraft and basic interceptor used was the F-51 Mustang, supplied from surplus US stocks. The first jet aircraft to enter service was the Lockheed T-33 trainer. Thirteen Cessna A-37 Dragonfly aircraft, a Vietnam-proven light attack jet, were delivered in 1974–1975. In 1978 overt U.S. military aid was cut off due to human rights violations. To circumvent this, Guatemala turned to countries like Argentina, Israel and Switzerland, and the United States continued to supply dual-use aircraft and covertly provided the air-force with millions of dollars in overhauls and spare parts for previously purchased aircraft. From Switzerland, twelve Pilatus PC-7 were acquired in 1979–1980 as training aircraft, subsequently also used in combat during the counter-insurgency. A military coup that brought in a more moderate[according to whom?] military junta to power in 1982, saw the arms embargo lifted in 1983.

At the beginning of the 1970s, there was tension concerning a dispute with the UK over the status of neighboring British Honduras (now Belize). In 1970, a T-33 overflew Belize City on a photo-reconnaissance mission. In 1971 the FAG forward-deployed seven F-51 Mustangs to an airstrip at Tikal, near the frontier.[1] Guatemalan C-47 transport aircraft made parachute drops in daylight near the border area.[2] The British reinforced their garrison, but the diplomatic tension eased, and conflict was averted.

From the 1970s to 1990s, the Guatemalan Air Force was heavily involved in counter-insurgency operations against guerrilla forces. Helicopters were used to support the army, and air strikes launched by A-37 light-attack jets and PC-7 armed trainers. One A-37 was lost in action in 1985.[3]

Although the role of the FAG has been much diminished since the Guatemala Peace Treaty was signed in 1996, they have served the country after natural disasters, most notably after Hurricane Mitch and Hurricane Stan. During those disasters, helicopters were used to rescue stranded people, and cargo planes were used to carry food, water and emergency medical equipment to villages and remote places that had been cut off.[citation needed]

The FAG is composed of three groups or "wings": the Fixed Wing, the Rotary Wing (helicopters), and the Maintenance Wing, which performs the aircraft's maintenance. The "wings" operate out of four bases throughout the country, without a fixed allocation of units to bases. The principal base is La Aurora in Guatemala City, which is also the country's major airport. All main attack, transport, liaison and helicopter squadrons are based there. The other base with a seemingly fixed presence is at Retalhuleu, where the Military School of Aviation ('Escuela Militar de Aviación') is located. The other two bases are at Santa Elena, Petén 'Base Aérea del Sur' in Retalhuleu and San José Escuintla.

The Cessna A-37 is the main jet aircraft, while the retired Pilatus PC-7s were used for training. On September 2011, Guatemala requested credit approval of $166 millions to buy six EMB-314, radar and equipment.[4] 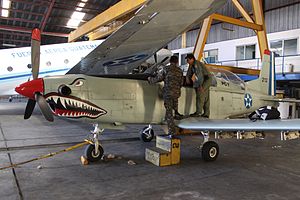 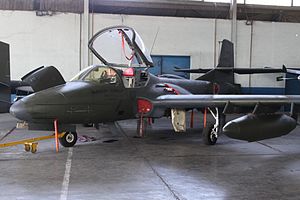