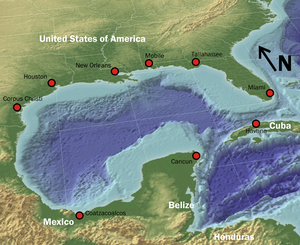 The Gulf of Mexico and Coastal Plains.

The Gulf Coastal Plain extends around the Gulf of Mexico in the Southern United States and eastern Mexico.

The plains reaches from the Florida Panhandle, southwest Georgia, the southern two thirds of Alabama, over most of Mississippi, western Tennessee and Kentucky, the Missouri Bootheel, eastern and southern Arkansas, all of Louisiana, the southeast corner of Oklahoma, and easternmost Texas in the United States.[1] It continues along the Gulf in northeastern and eastern Mexico, through Tamaulipas and Veracruz to Tabasco and the Yucatán Peninsula on the Bay of Campeche.

The Gulf Coastal Plains southern boundary is the Gulf of Mexico in the U.S. and the Sierra Madre de Chiapas in Mexico. On the north it extends to the Ouachita Highlands of the Interior Low Plateaus and the southern Appalachian Mountains. Its northernmost extent is along the Mississippi embayment (Mississippi Alluvial Valley) as far north as the southern tip of Illinois.[1] To the east the Gulf coastal plain meets the South Atlantic Coastal Plain in southern Georgia along the basin divide between the rivers flowing into the Gulf and those flowing to the Atlantic[2] and south along the Apalachicola River through the Florida panhandle. The flat to rolling topography is broken by many streams, river riparian areas, and marsh wetlands. The Gulf Coastal plain also extends into Southern Mexico.

The northern region uplands are dominated by pine, originally Longleaf and Slash in the south and Shortleaf mixed with hardwoods in the north. These are wildfire-maintained systems that give way to Loblolly Pine and hardwoods in damper areas and bottomland hardwood forest in extensive lowland drainages. The southern region has tropical and subtropical moist broadleaf forests and western Gulf coastal grasslands. They include large habitats of freshwater wetlands, salt marshes, and coastal mangrove swamps.[3] Much of the lower elevation Gulf Coastal Plains supports wintering waterfowl.[4]

A global satellite study by German and USA scientists spanning the last decade indicates groundwater resources are shrinking due to over-utilization causing regional water security uncertainty in a changing climate. Surface water quality is also declining due to increasing population, depleted streams, and land subsidence along certain coastlines.[5] The Atlantic and Gulf Coastal Plains Aquifer is considered to have low to moderate stress, however, the region's economic capacity and land use patterns signal trends toward a human-dominated stress on water resources.[6]