The Gulf of Aden (Arabic: خليج عدن‎‎ Ḫalīǧ ʻAdan, Somali: Gacanka Cadmeed) is a gulf located in the Arabian Sea between Yemen, on the south coast of the Arabian Peninsula, and Somalia in the Horn of Africa. In the northwest, it connects with the Red Sea through the Bab-el-Mandeb strait, which is more than 20 miles wide. It shares its name with the port city of Aden in Yemen, which forms the northern shore of the gulf. Historically the Gulf of Aden was known as "The Gulf of Berbera", named after the ancient Somali port city of Berbera on the south side of the gulf.[1][2] However, as the city of Aden grew during the colonial era, the name of "Gulf of Aden" was popularised.

The waterway is part of the important Suez canal shipping route between the Mediterranean Sea and the Arabian Sea in the Indian Ocean with 21,000 ships crossing the gulf annually.[3]

The name of the Gulf was inspired by the coastal Yemeni city of Aden. The Somali names are Gacanka Cadmeed or Gacanka Saylac.

The International Hydrographic Organization defines the limits of the Gulf of Aden as follows:[4] 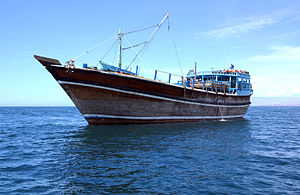 A dhow in the Gulf of Aden.

The Gulf of Aden is a vital waterway for shipping, especially for Persian Gulf oil, making it an integral waterway in the world economy.[6] Approximately 11 percent of the world's seaborne petroleum passes through the Gulf of Aden on its way to the Suez Canal or to regional refineries.[7] The main ports along the gulf are Aden in Yemen, Djibouti City in Djibouti, and Zeila and Berbera in Somaliland and Bosaso in Somalia.

In earlier history, the city of Crater, located just south of the modern city of Aden, was an important port in regional trade. Crater was the principal harbor of the pre-Islamic kingdom of Awsan, and after its annexation by the kingdom of Saba at the end of the 5th century, played a significant role in connecting Africa with Arabia.

India receives USD 50 billion in imports and sends USD 60 billion in exports through this area annually. Because of this and for the sake of protecting the trade of other countries, India keeps a warship escort in this area.[8]

In the late 2000s, the gulf evolved into a hub of pirate activity. By 2013, attacks in the waters had steadily declined due to active private security and international navy patrols.[9]

A geologically young body of water, the Gulf of Aden has a unique biodiversity that contains many varieties of fish, coral, seabirds and invertebrates. This rich ecological diversity has benefited from a relative lack of pollution during the history of human habitation around the gulf. However, environmental groups fear that the lack of a coordinated effort to control pollution may jeopardize the gulf's ecosphere.[10] Whales, dolphins, and dugongs[11] were once common before being severely reduced by commercial hunts, including by mass illegal hunts by Soviet Union and Japan in 1960s to 70s.[12]

Towns and cities on the Gulf of Aden coast: