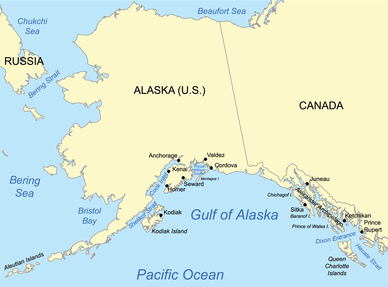 Map showing the Gulf of Alaska.

The Gulf of Alaska is an arm of the Pacific Ocean defined by the curve of the southern coast of Alaska, stretching from the Alaska Peninsula and Kodiak Island in the west to the Alexander Archipelago in the east, where Glacier Bay and the Inside Passage are found.

The entire shoreline of the Gulf is a rugged combination of forest, mountain, and a number of tidewater glaciers. Alaska's largest glaciers, the Malaspina Glacier and Bering Glacier spill out onto the coastal lain along the Gulf of Alaska. The coast is also heavily indented, with Cook Inlet and Prince William Sound the two largest connected bodies of water, but also including Yakutat Bay and Cross Sound. Lituya Bay is the site of the largest recorded tsunami in history and is a popular sheltered anchorage for fishing boats.

The Gulf of Alaska is considered a Class I, highly productive ecosystem (more than 300 grams of carbon per square meter per year)[1] based on SeaWiFS data.

Many deep water corals can be found in the Gulf of Alaska. Primnoa pacifica has contributed to the location being labeled as Habitat Areas of Particular Concern.[2] P. pacifica is typically a deep water coral normally found between 150 metres (490 ft) and 900 metres (3,000 ft) here.[3]

The Gulf is a great generator of storms. In addition to dumping vast quantities of snow and ice on southern Alaska, resulting in some of the largest concentrations south of the Arctic Circle, many of the storms move south along the coasts of British Columbia, Washington, Oregon, and as far south as Southern California (primarily during El Nino events). Much of the seasonal rainfall and snowfall in the Pacific Northwest and Southwestern United States comes from the Gulf of Alaska.

The International Hydrographic Organization defines the limits of the Gulf of Alaska as follows:[4]

On the North. The coast of Alaska.

On the South. A line drawn from Cape Spencer, the Northern limit of [the Coastal Waters of Southeast Alaska and British Columbia] to Kabuch Point, the Southeast limit of [the Bering Sea], in such a way that all the adjacent islands are included in the Gulf of Alaska.

According to the United States Geological Survey Geographic Names Information System, the Gulf of Alaska is bounded on the north by the coast of Alaska and on the south by a line running from the south end of Kodiak Island on the west to Dixon Entrance on the east.[5]