From Infogalactic: the planetary knowledge core
Jump to: navigation, search
Not to be confused with the Gulf of Boothia.
"Bothnia" redirects here. For other uses, see Bothnia (disambiguation). 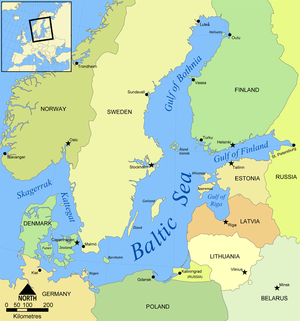 Map of the Baltic Sea, showing the Gulf of Bothnia in the upper half 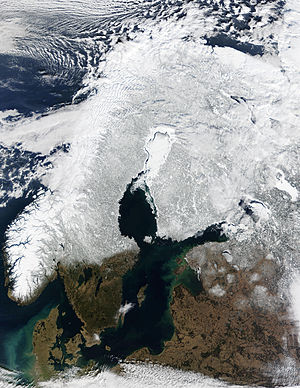 Satellite image of Fennoscandia in winter. The northern part of the Gulf of Bothnia, the Bothnian Bay, is covered with sea ice.

The Gulf of Bothnia (Finnish: Pohjanlahti; Swedish: Bottniska viken, i.e. Bottenviken + Bottenhavet) is the northernmost arm of the Baltic Sea. It is situated between Finland's west coast and Sweden's east coast. In the south of the gulf lie the Åland Islands, between the Sea of Åland and the Archipelago Sea.

Bothnia is a latinization. The Swedish name "Bottenviken" was originally just "Botn(en)" with botn being Old Norse for "gulf" or "bay";[1] which is also the meaning of the second element "vik".

The name botn was applied to the Gulf of Bothnia as Helsingjabotn in Old Norse, after Hälsingland, which at the time referred to the coastland west of the gulf. Later, botten was applied to the regions Västerbotten on the western side and Österbotten the eastern side ("East Bottom" and "West Bottom"). The Finnish name of Österbotten, Pohjanmaa, or "Pohja"-land, gives a hint as to the meaning in both languages: pohja means both "bottom" and "north."[citation needed]

Botn/botten is cognate with the English word bottom, and it might be part of a general north European distinction of lowlands, as opposed to highlands, such as the Netherlandic region, Samogitia (Lithuanian), and Sambia (Russia).[clarification needed][citation needed]

A second possibility is that botten follows an alternative Scandinavian connotation of 'furthermost'. Thus, the Gulf of Bothnia would be the farthest extent of the Ocean.[citation needed]

Julius Pokorny gives the extended Indo-European root as *bhudh-m(e)n with a *bhudh-no- variant, from which the Latin fundus, as in fundament, is derived. The original meaning of English north, from Indo-European *ner- "under", indicates an original sense of "lowlands" for "bottomlands". On the other hand, by "north" the classical authors usually meant "outermost", as the northern lands were outermost to them.[citation needed]

The origin of the word is indeed very ancient, belonging to a period before the world discoveries by the Portuguese. Until then, North was not seen as the magnetic top of the world, East being the normal orientation of a map.[citation needed]

Also, in Saami, the cardinal directions were named according to the different parts of the typical tent used by this nomadic people. The door of the tent was traditionally pointed South, in the most sunny direction, and the bottom of the tent would be aligned with the North. Thus the origin of the word 'Pohja' in its use as "North". Deriving as well from this logic is the affinity in the Finnish language of the words 'eteinen', meaning "hall" and 'Etelä', "South".[citation needed]

The International Hydrographic Organization defines the southern limit of the Gulf of Bothnia as follows:[2]

From Simpnäsklubb (59°54'N) in Sweden, to Flötjan, Lagskær [sic], Fæstörne [sic], Kökarsörn, and Vænö-Kalkskær [sic] to the SW point of Hangöudde (Hangö Head, 59°49'N) in Finland, thus including the Aland islands and adjacent shoals and channels in the Gulf of Bothnia. 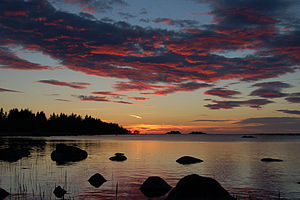 The depth and surface area of Gulf if Bothnia are constantly decreasing, as the land is rising after it had been pressed down by the continental ice during last ice age. The rise is 80 cm every hundred years.[4]

Into the gulf flow a number of rivers from both sides; consequently, a salinity gradient exists from north to south. In the south the water is the normal brackish water of the Baltic Sea, but in the north, in the Bothnian Bay, the salinity is so low,[5] from 0.4% near Kvarken to 0.2% in the northernmost part,[6] and many freshwater fish such as the pike, whitefish and perch thrive in it.[4]

Being nearly fresh, the gulf is frozen over five months every year. The icing of the Baltic Sea begins and ends in the northern Gulf of Bothnia. Traffic restrictions for ice breaker assistance are typically in force for all the gulf from late January to late April and for the northernmost ports from the middle of December to the middle of May.[7]

For the geological history of the entire region, refer to the Baltic Sea.

The land surrounding the Gulf of Bothnia is heavily forested. Trees are logged, then transported to the coast for milling. The gulf is also important for oil transport to the coastal cities and ore transport to steel mills, for instance in Raahe.

In terms of tonnage in international traffic, the largest ports on the Finnish side are Rauma, Kokkola and Tornio.[8] The main ports of the Swedish side are in Luleå, Skellefteå, Umeå, Sundsvall, Gävle and Hargshamn. In Luleå, iron ore pellets are exported and coal is imported. Gävle is Sweden's third-largest container port. It also ships forest products and oil.[9] The Gulf of Bothnia, ice breakers assist the ports needed in average half a year, when the Gulf of Finland, the season is only three months.[10]