From Infogalactic: the planetary knowledge core
Jump to: navigation, search
"Sea of Cortez" redirects here. For the John Steinbeck book, see The Log from the Sea of Cortez.

The Gulf is thought to be one of the most diverse seas on the planet, and is home to more than 5,000 species of micro-invertebrates.[2] Home to over a million people, Baja California is one of the longest peninsulas in the world, second only to the Malay Peninsula in Southeast Asia.[3] The Gulf of California is a UNESCO World Heritage Site.

The International Hydrographic Organization defines the southern limit of the Gulf of California as: "A line joining Piastla Point (23°38'N) in Mexico, and the southern extreme of Lower California".[4]

One recognized transition zone is termed the Southwestern Baja California Peninsula. Transition zones exist between faunal regions, and they usually vary for each individual species. (Faunal regions are distinguishable based on the specific types of animals found there.[5])

Occasionally, the northern Gulf of California will go through significantly cold winters. The water in the Northern Gulf can sometimes drop below 8 °C (46 °F), which can lead to a large die-off of marine organisms. The animals most susceptible to the large decrease in water temperature include macroscopic algae and plankton.[3] 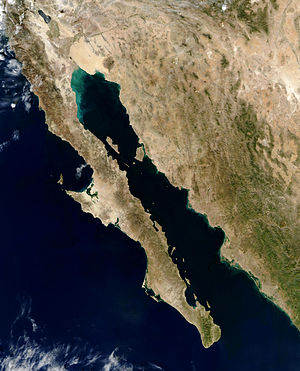 Geologic evidence is widely interpreted by geologists as indicating the Gulf of California came into being around 5.3 million years ago as tectonic forces rifted the Baja California Peninsula off the North American Plate. As part of this process, the East Pacific Rise propagated up the middle of the Gulf along the seabed. This extension of the East Pacific Rise is often referred to as the Gulf of California Rift Zone. The Gulf would extend as far as Indio, California, except for the tremendous delta created by the Colorado River. This delta blocks the sea from flooding the Mexicali and Imperial Valleys. Volcanism dominates the East Pacific Rise. The island of Isla Tortuga is one example of this ongoing volcanic activity.[10]

Even though the shores of the Gulf of California are generally sheltered from the continuous wave shock that is experienced by most other North American shores, storms known as a "chubasco" can cause significant damage to shorelines, despite their brevity.[3] 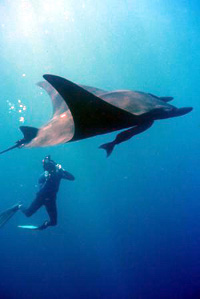 The narrow sea is home to a unique and rich ecosystem. In addition to a wide range of endemic creatures, such as the critically endangered vaquita, it hosts many migratory species, such as the humpback whale, California gray whale, killer whale, manta ray, Humboldt squid and leatherback sea turtle, and the world's largest animal, the blue whale. The unusual resident populations of fin whales and sperm whales do not migrate annually. The area near the delta of the Colorado river has a small remnant population of the totoaba fish. This region has historically been a magnet for world-class sport fishing activities, with a rich history of sporting world records.

The region also has a rich history as a commercial fishery. However, the data vary wildly according to the species being studied, and the Gulf's ability to recuperate after years of overfishing remains uncertain. Moreover, changes in terrestrial ecology, such as the vast reduction in flow from the Colorado River into the Gulf, have negatively affected fisheries, particularly in the northern region.

The Gulf of California sustains a large number of marine mammals, many of which are rare and endangered. Its more than 900 islands are important nesting sites for thousands of seabirds, and its waters are primary breeding, feeding, and nursing grounds for myriad migratory and resident fish species. For decades, the gulf has been a primary source of two of Mexico's leading marine resources, sardines and anchovies. Water pollution is a problem in the Gulf of California, but the more immediate concerns are overfishing and bottom trawling, which destroys eelgrass beds and shellfish.

Efforts by the Mexican government to create conservation zones and nature reserves have been hampered by lack of enforcement resources, as well as a lack of a political consensus on this issue of conservation of the Gulf.[citation needed] This occurs even though significant areas are a UNESCO World Heritage Site. The thousands of miles of coastline are remote and difficult to police, and the politically powerful commercial fishing industry has been slow to embrace even economically viable conservation measures, much less strict measures of conservation. Conservation of the Gulf's fisheries and coastlines is also complicated by a long history of overcapitalization in the sector, and the direct, often negative, impacts that conservation measures have on the livelihoods of Mexico's coastal inhabitants. At present, the Mexican government and business interests have promoted a macro-level, tourist development vision for the Gulf, the impacts of which on local ecology and society are uncertain.

Many marine organisms can only survive within a particular salinity range, which makes salinity a notable factor in determining the types of potentially commercial organisms found in the Gulf of California. The mean annual ranges of salinity of the Sea of Cortez are between 3.5 to 3.58% at the surface.[1] Furthermore, the salinity of the water of the Northern Gulf of California is generally higher than the Central and Southern faunal regions due to the increased amount of evaporation that occurs in that region.[3]

The three general types of shores found in the Gulf of California include rocky shore, sandy beach, and tidal flat. Some of the rich biodiversity and high endemism that characterize the Gulf of California and make it such a hotspot for fishing can be attributed to seemingly insignificant factors, such as the types of rocks that make up a shore. Beaches with softer, more porous rocks (such as Coquina limestone, rhyolites, granite, or diorite) generally have a higher species richness than those with harder, smoother rocks (such as basalt or diabase). Porous rocks will naturally have more cracks and crevices in them, making them ideal living spaces for many animals. The rocks themselves, however, generally need to be stable on the shore for a habitat to be stable. Additionally, the color of the rocks can affect the organisms living on a shore. For example, darker rocks will be significantly warmer than lighter ones, and can deter animals that do not have a high tolerance for heat.[3] The northern Gulf of California experiences tidal ranges of up to 5 m (16 ft). Mixed semidiurnal tides are the norm throughout most of the Gulf.

In the Gulf of California, there are a number of negative estuaries, that is, ones in which the evaporation of seawater is relatively greater than that of the fresh water input. The salinities of these inlets are higher than that of the ocean. The temperatures, poikilothermal, of these negative estuaries also are higher than the general temperature of the Gulf.

It is possible that at one time these estuaries were positive, that is, ones in which the seawater component is diluted; therefore, the water is brackish, with salinity less than that of the ocean.

However, due to human modification of the land use around the Gulf of California and water diversion for municipal and agricultural use, there are no longer many rivers that freely empty into the Gulf of California. The upper Colorado River Delta is one example of a historically major estuary and wetlands ecosystem, that since the 20th century construction of upriver dams and diversion aqueducts on the Colorado River, is now a small ephemeral remnant estuary. It is included in the UNESCO World Heritage Site. The remaining Gulf inlets still are important to several species of fishes, crustaceans, and shellfish that are commercially harvested.[3]

The Gulf of California contains 37 islands – the two largest being Isla Ángel de la Guarda and Tiburón Island. Most of the islands are found on the peninsular side of the gulf. In fact, many of the islands of the Sea of Cortez are the result of volcanic explosions that occurred during the early history of Baja California. The islands of Islas Marías, Islas San Francisco, and Isla Partida are thought to be the result of such explosions. The formations of the islands, however, are not dependent on each other. They were each formed as a result of an individual structural occurrence.[3] Several islands, including Isla Coronados, are home to volcanoes.

Depth soundings in the gulf have ranged from fording depth at the estuary near Yuma, Arizona, to in excess of 3,000 meters (9,800 ft) in the deepest parts. The depth of the water helps to determine its temperature. For example, shallow depths are directly influenced by the local temperature of the air, while deeper waters are less susceptible to changes in air temperature.[3]