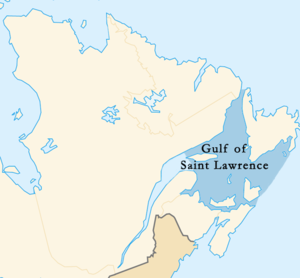 The Gulf of Saint Lawrence

The Gulf of Saint Lawrence (French: Golfe du Saint-Laurent) is the outlet of the North American Great Lakes via the Saint Lawrence River into the Atlantic Ocean. The gulf is a semienclosed sea, covering an area of about 236,000 square kilometres (91,000 sq mi) and containing about 35,000 cubic kilometres (8,400 cu mi) of water, which results in an average depth of 148 metres (486 ft).

The Gulf of Saint Lawrence is bounded on the north by the Labrador Peninsula and Quebec, to the east by Saint-Pierre and Newfoundland, to the south by the Nova Scotia peninsula and Cape Breton Island, and to the west by the Gaspe Peninsula, New Brunswick, and Quebec. As for significant islands the Gulf of Saint Lawrence contains Anticosti Island, Prince Edward Island, Îles-de-la-Madeleine, Cape Breton Island, Saint Pierre Island, and Miquelon-Langlade.

Half of the ten provinces of Canada adjoin the Gulf: New Brunswick, Nova Scotia, Prince Edward Island, Newfoundland and Labrador, and Quebec.

The gulf flows into the Atlantic Ocean through the following outlets:

The limits of the Gulf of Saint Lawrence vary between sources.

The International Hydrographic Organization defines the limits of the Gulf of Saint Lawrence as follows:[1]

On the West. The meridian of 64°30'W, but the whole of Anticosti Island is included in the Gulf.

Fisheries and Oceans Canada places the western limit at Pointe-des-Monts.[2] 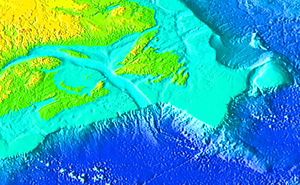 Bathymetry of the gulf, with the Laurentian Channel visible

Basque settlements and sites dating from the 16th and 17th centuries

St. Paul Island, Nova Scotia, off the northeastern tip of Cape Breton Island, is referred[by whom?] to as the "Graveyard of the Gulf" because of its many shipwrecks[citation needed]. Access to this island is controlled by the Canadian Coast Guard.

Bonaventure Island on the eastern tip of the Gaspe Peninsula, Île Brion and Rochers-aux-Oiseaux (Bird Rock) northeast of the Magdalen Islands[3] are important migratory bird sanctuaries administered by the Canadian Wildlife Service.

The five provinces bordering the Gulf of Saint Lawrence also have several provincial parks apiece, some of which preserve coastal features.

The Laurentian Channel is a feature of the floor of the Gulf that was formed during previous ice ages, when the Continental Shelf was eroded by the Saint Lawrence River during the periods when the sea level plunged. The Laurentian Channel is about 290 m (950 ft) deep and about 1,250 km (780 mi) long from the Continental Shelf to the mouth of the Saint Lawrence River. Deep waters with temperatures between 2 and 6.5 °C (36 and 44 °F) enter the Gulf at the continental slope and are slowly advected up the channel by estuariane circulation.[4] Over the 20th century, the bottom waters of the end of the channel (i.e. in the Saint Lawrence estuary) have become hypoxic.[5]

The gulf has provided a historically important marine fishery for various First Nations that have lived on its shores for millennia and used its waters for transportation.

The first documented voyage by a European in its waters was by the French explorer Jacques Cartier in the year 1534. Cartier named the shores of the Saint Lawrence River "The Country of Canadas", after an indigenous word meaning "village" or "settlement", thus naming the world's second largest country.[6]

At just about the same period, Basques came to frequent the area for whale-hunting and trade with the First Nations people of the modern Canadian Atlantic and Quebec provinces. They left vestiges of their presence in many locations of the area—docks, furnaces, graveyards, etc.