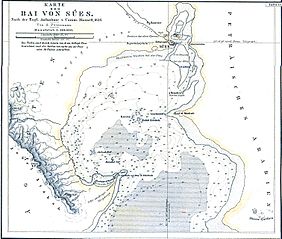 The northern end of the Red Sea bifurcates into the Sinai Peninsula, creating the Gulf of Suez (Arabic: خليج السويس‎‎; transliterated: khalīǧ as-suwais; formerly: بحر القلزم, transliterated: baḥar al-qulzum) in the west and the Gulf of Aqaba to the east. The gulf was formed within a relatively young but now inactive Gulf of Suez Rift rift basin, dating back about 28 million years.[1] It stretches some 300 kilometres (190 mi) north by northwest, terminating at the Egyptian city of Suez and the entrance to the Suez Canal. Along the mid-line of the gulf is the boundary between Africa and Asia.[2] The entrance of the gulf lies atop the mature Gemsa oil and gas field.[3]

The gulf occupies the northwestern arm of the Red Sea between Africa and the Sinai Peninsula. It is the third arm of the triple junction rift system, the second arm being the Gulf of Aqaba.

The International Hydrographic Organization defines the southern limit of the gulf as "A line running from Ras Muhammed (27°43'N) to the South point of Shadwan Island (34°02'E) and thence Westward on a parallel (27°27'N) to the coast of Africa".[4]