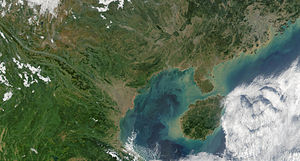 True color satellite image of the Gulf of Tonkin

The Gulf of Tonkin (Vietnamese: Vịnh Bắc Bộ, simplified Chinese: 北部湾; traditional Chinese: 北部灣; pinyin: Běibù Wān) is a body of water located off the coast of northern Vietnam and southern China. It is a northern arm of the South China Sea. The Gulf is defined in the west by the northern coastline of Vietnam, in the north by China's Guangxi province, and to the east by China's Leizhou Peninsula and Hainan Island.

The bay's Vietnamese and Chinese names – Vịnh Bắc Bộ and Běibù Wān, respectively – both mean "Northern Bay". The name Tonkin, written "東京" in Hán-Nôm characters and Đông Kinh in the Vietnamese alphabet, means "eastern capital", and is the former toponym for Hanoi, the present capital of Vietnam. It should not to be confused with Tokyo, which is also written "東京" and also means "eastern capital". During Vietnam's French colonial era, Tonkin was used to refer to the north of the country.[citation needed]