Gurmukhi (IPA: [ɡʊɾmʊkʰi]) is an alphabetic abugida developed from the Laṇḍā scripts and was standardised during the 16th century by Guru Angad, the second guru of Sikhism. The Old Punjabi word Gurmukhī means "from the mouth of the Guru". The whole of the Guru Granth Sahib is written in this script, and it is the script most commonly used by Sikhs and Hindus for writing the Punjabi language.

Modern Gurmukhi has thirty-eight consonants (vianjan), nine vowel symbols (lāga mātrā), two symbols for nasal sounds (bindī and ṭippī), and one symbol which duplicates the sound of any consonant (addak). In addition, four conjuncts are used: three subjoined forms of the consonants Rara, Haha and Vava, and one half-form of Yayya. Use of the conjunct forms of Vava and Yayya is increasingly scarce in modern contexts.

Gurmukhi is primarily used in the Punjab, India, where it is the sole official script for all official and judicial purposes. The script is also widely used in the Indian states of Haryana, Himachal Pradesh, Jammu and the national capital of Delhi, with Punjabi being one of the official languages in these states. Gurmukhi has been adapted to write other languages, such as Braj Bhasha, Khariboli and other Hindustani language dialects, Sanskrit and Sindhi.[2] 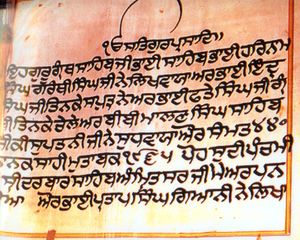 There are two major theories on how the Proto-Gurmukhi script emerged in the 15th century. G.B. Singh (1950), while quoting Abu Raihan Al-Biruni's Ta'rikh al-Hind (1030 CE), says that the script evolved from Ardhanagari. Al-Biruni writes that the Ardhanagari script was used in Bathinda and western parts of the Punjab in the 10th century. For some time, Bathinda remained the capital of the kingdom of Bhatti Rajputs of the Pal clan, who ruled North India before the Muslims occupied the country. Because of its connection with the Bhattis, the Ardhanagari script was also called Bhatachhari. According to Al-Biruni, Ardhanagari was a mixture of Nagari, used in Ujjain and Malwa, and Siddha Matrika or the last stage of Siddham script, a variant of the Sharada script used in Kashmir. This theory is confusing as Gurmukhi characters have a very close resemblance with "Siddh Matrika" inscriptions found at some sacred wells in Punjab as G.B Singh notes, one being the hathur inscription dating to just before the brith of Guru Nanak. Siddh Matrika seems to have been the prevalent script for devotional writings in Punjab right up to the founding of Sikh faith, after which its successor Gurmukhi appears.

Pritam Singh (1992) has also traced the origins of Gurmukhi to the Siddha Matrika. "Siddha Matrika" along with its sister script Takri has its origins in the ancient Sharada script of Kashmir.

Tarlochan Singh Bedi (1999) writes that the Gurmukhi script developed in the 10-14th centuries from the Devasesha stage of the Sharada script the intermediate phase being Siddha Matrika, before the final evolution into Gurmukhi. His argument is that from the 10th century, regional differences started to appear between the Sharada script used in Punjab, the Hill States (partly Himachal Pradesh) and Kashmir. The regional Sharada script evolves from this stage till the 14th century, when it starts to appear in the form of Gurmukhi. Indian epigraphists call this stage Devasesha, while Bedi prefers the name Pritham Gurmukhi or Proto-Gurmukhi.

The 10 Sikh Gurus adopted the Proto-Gurmukhi script to write the Guru Granth Sahib, the religious scriptures of the Sikhs. Other contemporary scripts used in the Punjab were Takri and the Laṇḍā alphabets. Also Takri script that developed through the Devasesha stage of the Sharada script, and is found mainly in the Hill States, such as Chamba, where it is called Chambyali and in Jammu, where it is known as Dogri. The local Takri variants got the status of official scripts in some of the Punjab Hill States, and were used for both administrative and literary purposes until the 19th century. After 1948, when Himachal Pradesh was established as an administrative unit, the local Takri variants were replaced by Devanagari.

Meanwhile, the mercantile scripts of Punjab known as the Laṇḍā were normally not used for literary purposes. Landa means alphabet "without tail", implying that the script did not have vowel symbols. In Punjab, there were at least ten different scripts classified as Laṇḍā, Mahajani being the most popular. The Laṇḍā alphabets were used for household and trade purposes. Compared to the Laṇḍā, Sikh Gurus favoured the use of Proto-Gurmukhi, because of the difficulties involved in pronouncing words without vowel signs.

The usage of Gurmukhi letters in Guru Granth Sahib meant that the script developed its own orthographical rules. In the following epochs, Gurmukhi became the prime script applied for literary writings of the Sikhs. Later in the 20th century, the script was given the authority as the official script of the Eastern Punjabi language. Meanwhile, in Western Punjab a form of the Urdu script, known as Shahmukhi is still in use.

Although the word Gurmukhī has been commonly translated as "from the Mouth of the Guru," the term used for the Punjabi script has somewhat different connotations. The opinion traditional scholars for this is that as the Sikh holy writings, before they were written down, were uttered by the Gurus, they came to be known as Gurmukhi or the "Utterance of the Guru". And consequently, the script that was used for scribing the utterance was also given the same name. The term that would mean "by the Guru's mouth" would be "Gurmū̃hī̃," which sounds considerably different but looks similar in Latin script.

However, the prevalent view among Punjabi linguists is that as in the early stages the Gurmukhī letters were primarily used by Gurmukhs, literally those who follow or face the Guru, the script came to be associated with them. Another view is that as the Gurmukhs, in accordance with the Sikh belief, used to meditate on the letters ਵ, ਹ, ਗ, ਰ which jointly form ਵਾਹਿਗੁਰੂ or Praise of Guru in Sikhism, these letters were called Gurmukhī, or "of the Gurmukhs". Subsequently, the whole script came to be known as Gurmukhī.

Gurmukhi alphabet with names of animals

The Gurmukhi alphabet contains thirty-five letters. The first three are distinct because they form the basis for vowels and are not consonants, and except for æṛa are never used on their own. See the section on vowels for further details.

ਙ |ŋɑŋːɑ̃ | and ਞ |ɲəɲːɑ̃ | are rarely used. They cannot begin a syllable or be placed between two consonants, and occur most often as an allophone of n before specific consonant phonemes.

The pronunciation of ਵ will vary between v and w depending on the word.

In addition to these, there are six consonants created by placing a dot (bindi) at the foot (pair) of the consonant (these are not present in Sri Guru Granth Sahib). These are used most often for loanwords, though not exclusively:

|ləlːɑ pɛɾ bɪnd̪i| was only recently added to the Gurmukhi alphabet. It was not a part of the traditional orthography, the phonological difference between 'l' and 'ɭ' was not reflected in the script. Some sources do not consider it a separate letter.

Independent vowels are constructed using three bearer characters: Ura (ੳ), Aira (ਅ) and Iri (ੲ). With the exception of Aira (which represents the vowel 'a') they are never used without additional vowel signs. 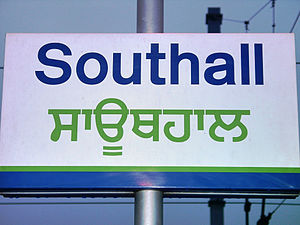 Station sign in the Latin and Gurmukhī scripts in Southall, UK

Ṭippi ( ੰ ) and bindi ( ਂ ) are used for producing a nasal phoneme depending on the following obstruent or a nasal vowel at the end of a word. All short vowels utilise ṭippi and all long vowels are paired with bindi except for Dulankar ( ੂ ) which uses ṭippi instead . Older texts may not follow these conventions.

The halant (੍) character is not used when writing Punjabi in Gurmukhi. However, it may occasionally be used in Sanskritised text or in dictionaries for extra phonetic information. When it is used, it represents the suppression of the inherent vowel.

The effect of this is shown below:

The visarg symbol (ਃ U+0A03) is used very occasionally in Gurmukhi. It can either represent an abbreviation (like period is used in English) or it can act like a Sanskrit Visarga where a voiceless ‘h’ sound is pronounced after the vowel.

Gurmukhī script was added to the Unicode Standard in October, 1991 with the release of version 1.0. Many sites still use proprietary fonts that convert Latin ASCII codes to Gurmukhi glyphs.