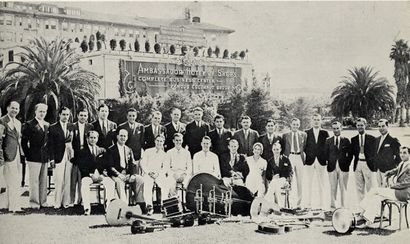 Armheim's first recorded for OKeh in 1928-1929, when he signed with Victor in 1929 and stayed through 1933. He signed with Brunswick and recorded through 1937. In 1928-31, Arnheim had an extended engagement at the Cocoanut Grove in Los Angeles. In 1930, when Paul Whiteman finished filming The King of Jazz for Universal, The Rhythm Boys vocal trio, consisting of Bing Crosby, Harry Barris and Al Rinker decided to stay in California and they signed up with Arnheim's band. While the Rhythm Boys only recorded one song with Arnheim, "Them There Eyes" (which also happened to be The Rhythm Boys final recording), Arnheim's Orchestra backed Crosby on a number of songs released by Victor Records in 1931.[3] These popular records, coupled with Arnheim's radio broadcasts featuring Crosby's solo vocals, were a key element to the beginning of Crosby's popularity as a crooner.

Arnheim grew up in Chicago and at one point was accompanist to vaudevillian Sophie Tucker.

In 1919 three men who all would become famous band leaders played together at the Sunset Inn in Santa Monica, California. Arnheim played piano, Abe Lyman played the drums, and Henry Halstead played violin.

When Lyman organized a full dance orchestra, Arnheim came along as pianist, leaving to start his own group in 1927.

Between 1939 and 1941, Mexican American crooner Andy Russell played the drums and sang with Arnheim. Arnheim was the one who suggested that Russell sing bilingually in English and Spanish and change his last name from Rábago to Russell leading to his first million-selling record "Besáme Mucho".[4][5]

In the early 1930s, Arnheim "was heard on the Lucky Strike Dance Hour, which was broadcast weekly on NBC."[7]