Gustav Radbruch (21 November 1878 – 23 November 1949) was a German legal scholar and politician. He served as Minister of Justice of Germany during the early Weimar period. Radbruch is also regarded as one of the most influential legal philosophers of the 20th century.

Born in Lübeck, Radbruch studied law in Munich, Leipzig and Berlin. He passed his first bar exam ("Staatsexamen") in Berlin in 1901, and the following year he received his doctorate with a dissertation on "The Theory of adequate causation." This was followed in 1903 by his qualification to teach criminal law in Heidelberg. In 1904, he was appointed Professor of criminal and trial law and legal philosophy in Heidelberg. In 1914 he accepted a call to a professorship in Königsberg, and later that year assumed a professorship at Kiel.[1] [2]

Radbruch was a member of the Social Democratic Party of Germany (SPD), and held a seat in the Reichstag from 1920 to 1924. In 1921-22 and throughout 1923, he was minister of justice in the cabinets of Joseph Wirth and Gustav Stresemann. During his time in office, a number of important laws were implemented, such as those giving women access to the justice system, and, after the assassination of Walter Rathenau, the law for the protection of the republic.

In 1926, Radbruch accepted a renewed call to lecture at Heidelberg. After the Nazi seizure of power in 1933, Radbruch was dismissed from his civil service post, as the universities were public entities. During the Nazi period, he devoted himself primarily to cultural-historical work.

Immediately after the end of the Second World War in 1945, he resumed his teaching activities, but died at Heidelberg in 1949 without being able to complete his planned updated edition of his textbook on legal philosophy.

In September 1945, Radbruch published a short paper Fünf Minuten Rechtsphilosophie (five minutes of legal philosophy), that was influential in shaping the jurisprudence of values (Wertungsjurisprudenz), prevalent in the aftermath of World War II as a reaction against legal positivism. 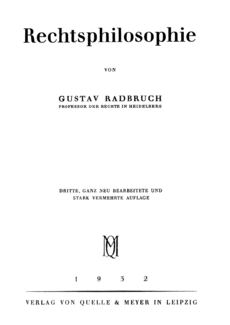 Radbruch's legal philosophy derived from Neokantianism, which assumes that a categorical cleavage exists between "is" (sein) and "ought" (sollen). According to this view, "should" can never be derived from "Being." Indicative of the Heidelberg school of neokantianism to which Radbruch subscribed was that it interpolated the value-related cultural studies between the explanatory sciences (being) and philosophical teachings of values (should). 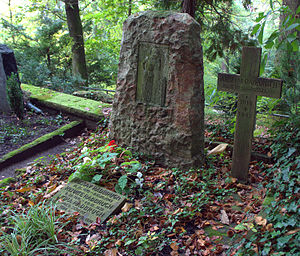 His grave in Heidelberg

In relation to the law, this triadism shows itself in the subfields of legal sociology, legal philosophy and legal dogma. Legal dogma assumes a place in between. It posits itself in opposition to positive law, as the latter depicts itself in social reality and methodologically in the objective "should-have" sense of law, which reveals itself through value-related interpretation.

Hotly disputed is the question whether Radbruch was a legal positivist before 1933 and executed an about-face in his thinking due to the advent of Nazism, or whether he continued to develop, under the impression of Nazi crimes, the relativistic values-teaching he had already been advocating before 1933.

The problem of the controversy between the spirit and the letter of the law, in Germany, has been brought back to public attention due to the trials of former East German soldiers who guarded the Berlin Wall—the so-called necessity of following orders. Radbruch's theories are posited against the positivist "pure legal tenets" represented by Hans Kelsen and, to some extent, also from Georg Jellinek.

In sum, Radbruch's formula argues that where statutory law is incompatible with the requirements of justice "to an intolerable degree", or where statutory law was obviously designed in a way that deliberately negates "the equality that is the core of all justice", statutory law must be disregarded by a judge in favour of the justice principle. Since its first publication in 1946 the principle has been accepted by Germany's Federal Constitutional Court in a variety of cases. Many people partially blame the older German legal tradition of legal positivism for the ease with which Hitler obtained power in an outwardly "legal" manner, rather than by means of a coup. Arguably, the shift to a concept of natural law ought to act as a safeguard against dictatorship, an untrammeled State power and the abrogation of civil rights.